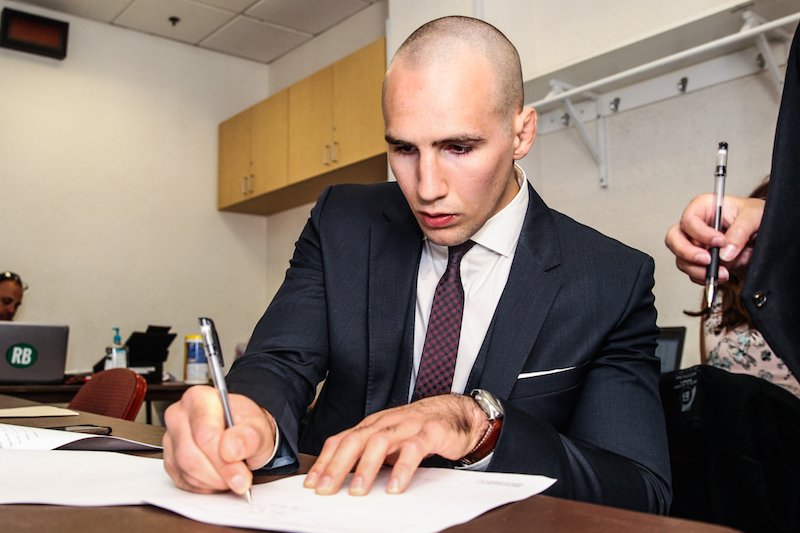 It's not much of a surprise to see a lot of Strikeforce in Bellator MMA.

Max Holloway Not Interested In Conor McGregor Rematch After Loss, More News | Fightful Fix Round Up

Scott Coker's vision of successful MMA is a broad one -- freak show fights mixed with top-level MMA. Celebrities, athletes combined with some of the best talents in the world. Veterans that perhaps shouldn't even be licensed to fight, added to young stars and competitors in their prime. The business model made Strikeforce a viable competitor to the UFC, and now Coker has used that vision -- along with Bellator owner Viacom's checkbook -- to become a major player in the MMA free agent market.

Wednesday afternoon it was announced that former UFC title challenger Rory MacDonald was nearing a contract agreement with Bellator, after the UFC declined to match their offer. The move is the latest of several efforts Bellator has made to take talent away from the UFC, and uses some of it's interesting resources to do so.

The 27-year old MacDonald is likely to be inserted into the Welterweight title picture after taking a couple of steps back with consecutive losses. Ben Henderson did the same, coming up short, but has a new run available at 155 pounds, as he'll face Mike Chandler for the title later this year.  Phil Davis got a fresh start in a new organization. Former UFC Heavyweight Matt Mitrione has a commentary gig, and virtually all of the signings have sponsors and the option of Bellator Kickboxing hanging overhead as reasons to jump ship.

The UFC's Reebok deal has been a polarizing one, with folks like TUF alumni Brendan Schaub opting to retire for a world of podcasting and stand-up comedy after losing out on six figures per-fight under the terms of the sponsorship deal. Bellator also tried to scoop him up, but the two sides couldn't come to terms on a contract. Quinton "Rampage' Jackson, who was forced to return to Bellator to fulfill an old contract, has noted that sponsorships as a prime attraction to fight for the Viacom-owned league.

Naysayers point to the fact that MacDonald has dropped two consecutive fights, that Rampage Jackson has lost a step, that Phil Davis had issues at the top of the division, that Ben Henderson had troubles towards the tail end of his lightweight run -- none of that matters. Bellator is accumulating talent -- familiar talent. It doesn't stop there, either. Free agency isn't the only way Bellator has differentiated themselves in the past couple of years. After dropping their tournament format, the company acquired the late Kimbo Slice, Royce Gracie, Ken Shamrock, among others to compliment a stable of veterans that also includes Tito Ortiz, Wanderlei Silva, and Stephan Bonnar. Bellator also jumped at the opportunity to sign veteran lightweights Melvin Guillard, Paul Daley, Josh Thomson and heavyweight Sergei Kharitonov.

Bellator isn't without their free agency and promotional gaffes, for sure. Bjorn Rebney let Ben Askren and Cole Konrad walk away, and goofed with Frodo Khasbulaev. Under the Coker regime, Vitaly Minakov hasn't fought, Alexander Volkov and Blagoi Ivanov were released, and Will Brooks turned down a bigger Bellator offer to sign with UFC. The aforementioned names have one loss in a combined 18 fights since their last Bellator appearances.

Free agency in mixed martial arts has never been a hotter topic than it is now. You have guys like Aljamain Sterling and Lorenz Larkin betting on themselves to better leverage negotiations. Several years ago, their contract's coming up would have been a blip on the radar. Today, it's headline news.

There are plenty of fighters on the open market for Bellator or UFC to snatch up: Fedor Emelianenko, Marlon Moraes, Ben Saunders, Gerald Harris, Luke Barnatt, Mamed Khalidov are all interesting names, with some getting UFC attention. With the exception of Fedor, none are likely to be game changers, but with Bellator looking for depth, they're there. But what's to stop Bellator from trying to mend fences with some of the guys they've let go of in the past, proven, quality names? If anyone can do it, the fighter-friendly Scott Coker can, even with the ones he's let go. While Bellator is signing UFC's free agents, it's important to keep homegrown talent. Will the contracts given to former UFC stars cause bigger contracts for Bellator talents, or take a bigger piece of the pie. For the sake of the sport, hopefully he former.

Freak show fights, big signings, Scott Coker. It really seems like Strikeforce on Spike TV. Perhaps Bellator is slowly but surely turning into SpikeForce, and I'm not all that sure that's a bad thing.