The first half of 2017 proved that the dramas and romances of the squared circle, and the Octagon, are not yet vanquished. Firstly, on March 4, in a battle of north and south, Tony Bellew defied the odds with victory over David Haye via an eleventh-round stoppage. There was no belt on the line, but the fight was always set to be a box office smash – and, in any case, such a clash between two exuberant personalities is the sort of fight more readily associated with Hollywood.

There was decidedly less ‘romance’ when the world was once again stunned four months later, as the Philippines’ favorite son Manny Pacquiao fell to Jeff Horn via unanimous decision. In doing so, he lost the WBO welterweight title, with two of the judges scoring 115-113 in favour of Horn. While the third card (of judge Waleska Roldan) had Horn as a 117-111 winner, it would have been nonetheless heartbreaking for Pacquiao to know that just a bit more efficiency, and better conditioning, could have tilted the result in his favor.

Anderson Silva On Fighting Future: "The Future Is Amazing, Everything Is Possible"

With more shocks undoubtedly on the agenda for the second half of 2017, there is only one upcoming fight that immediately springs to mind when it comes to potential drama.

McGregor’s upcoming bout with Floyd Mayweather has captured the imagination of a bloodthirsty world audience. Since its announcement, it has remained the most talked about fight on social media. In addition to current pay-per-view figures, the existing array of free bet offers and specials – from the bookmakers pricing this fight, who see Mayweather as the overwhelming 1/6 favorite – also reflect its superlative popularity. Indeed, from a bettor’s perspective, this fight has the potential for exceptionally rich payouts. This is because the prospect of an MMA fighter in his prime taking on a semi-retired boxer is relatively unknown territory.

Physically, fighting in boots and 8oz gloves will be a surreal experience for McGregor, but there is clearly a lot of faith in his ability to go the distance with Mayweather. Rounds in professional boxing are also two minutes shorter than those at the highest echelon of MMA, and this could aid McGregor in a minor way. With boxers generally having no cause to learn the nuances of Brazilian Jiu-Jitsu, even the most seasoned pugilists can never hope to realize just how much stamina is required in phases of grappling on the floor.

With all of that accounted for, the best bet would appear to be 2/1 on a decision win for Mayweather, with such a result taking him past Rocky Marciano’s great record of 49-0. Both fighters have a strong desire to entertain, and a quick end to the fight would do neither fighter any favors in an era where publicity counts for much. Given the way the press conferences and publicity events have been conducted – often descending into nothing better than a wrestling promo rich with petty insults – this fight is at risk of being seen as a glorified exhibition.

For the purist boxing fans, or simply anyone not taken in by pay-per-view sales, Golovkin vs Alvarez is arguably the standout bout of this coming fall.

Though perhaps less hyped than Mayweather v McGregor, this is a bout that promises just as much high drama and violence. Hailing from Guadalajara, Alvarez boasts a record of 49-1-1, with his sole defeat coming against none other than Floyd Mayweather. A mere reversal of that result would see his record stand at the pioneering 50-0 Mayweather now appears to be assured of.

Though Alvarez’s record speaks for itself, Golovkin is synonymous with middleweight division dominance: 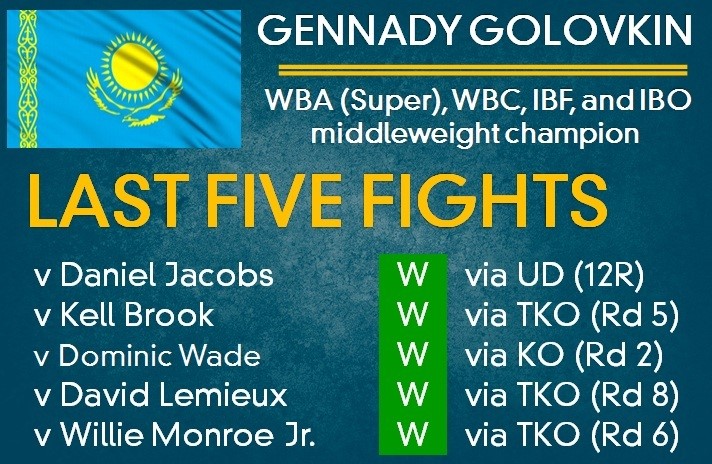 The ruthless nature of the Kazakhstani killer’s eight-round victory over David Lemieux, back in 2015, served to illustrate the dangers that face boxers making the step up to middleweight class. Naturally, then, Alvarez is the outsider by virtue of having spent a majority of his professional career under the middleweight boundary. However, he has an uncanny ability to make resounding bodybuilding progress, in a relatively short space of time, before any fight night.

Regardless, Golovkin still boasts a thoroughly terrifying record of 37-0 (33 KOs). As such, it seems just a question of when exactly he will score his thirty-fourth career knockout. The best bet here is a stoppage in the final three rounds for the 35-year old Golovkin, whose relatively advanced age might prevent an easier victory.

As the cousin of Tyson Fury, a man who has become a media magnet in recent years, Hughie Fury has been (as expected) significantly vocal ahead of his bout with New Zealand’s Joseph Parker. Again one for the purists, this match promises much. For a starter, the WBO heavyweight belt is on the line. So too are the unbeaten records of both fighters, with one fighter almost certain to receive his first blemish – thus ending whatever hopes he may have had in reaching the coveted 49-0 landmark.

Though Fury won his first title back in April, it was only via a technical decision that he beat Cameroonian contender Fred Kassi for the WBO Inter-Continental heavyweight title. Having already defended his title once, Joshua knows how much resilience is required to keep ownership of a belt. His knockout rate is also far superior to Fury’s: 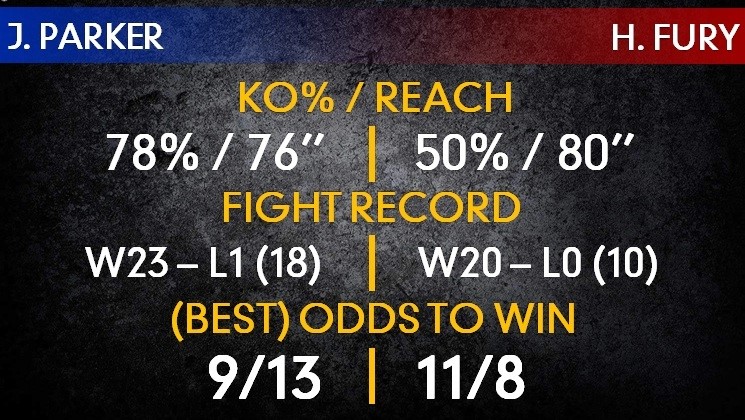 In addition to the unbeaten record context, there is also a colonial undercurrent. With Fury flying the flag for Britain, it is on Joseph Parker to finally establish New Zealand as a consistent source of premier boxing talent. Indeed, many Kiwis would argue that David Tua’s defeat to Lennox Lewis in November 2000 set New Zealand’s international boxing reputation back years, thus giving Parker extra incentive – through a fighter of his professionalism would not require it.

Expect a tough and grueling fight, with Parker to win on points.

When it comes to shocks, the Ultimate Fighting Championship (UFC) has also given fans a feeling of fulfillment. Mark Hunt’s victory over Derrick Lewis, who is eleven years his junior, at UFC Fight Night 110 showed the world that vast experience can sometimes be advantageous. Though forty-three years old, and in less than prime shape, the former K-1 world kickboxing champion slew his younger, fitter opponent with a flurry of punches that forced a fourth-round stoppage.

To be held in Rotterdam, UFC Fight Night 115 will headline with Struve v Volkov. For the former, the venue holds a particularly fond memory, having knocked out Antonio Silva in just fifteen seconds back in May 2016:

Indeed, 2016 was an encouraging year overall for the Dutchman, but his celebrations after a submission win over Daniel Omielanczuk were cut short by a shoulder injury.

A relative newcomer to UFC, with a record therein of 2-0, Alexander Volkov will have been boosted by a unanimous decision win over Roy Nelson at UFC on Fox 24. As a former Bellator and M-1 champion, the Russian knows exactly how to win and defy the odds. This is reflected in his standing as a narrow favorite to beat Struve on his own turf, and again, the smart money would be on another decision win for Volkov.

Following his bout with Mayweather on 26 August, father-to-be Conor McGregor is set to return to the Octagon later in 2017. Amongst his potential opponents are Khabib Nurmagomedov, Nate Diaz and Tyron Woodley. With a record of 17-3-1, Woodley could be the ideal opponent for McGregor on his return to UFC action. Naturally, Woodley would be by far the more conditioned of the two, as reflected by current projected odds. He is also still on a psychological high, having successfully defended his UFC welterweight championship via majority decision, against Stephen Thompson at UFC 209.

Many years from now, with the gift of hindsight, 2017 could become recognized as one of the most transitional years in the history of professional combat sport. Though he is not the first defector from one fighting discipline to another, the ever-influential Conor McGregor may become something of a trendsetter in due course.