SRS: Don't Be Surprised If UFC Has More Interim Champions

"Interim" Champion. It's almost subjective at this point what should qualify.

This weekend, we saw a situation where an injury at 205 pounds caused the relinquishing of a 145-pound championship, and subsequent interim title at the weight class -- even though a the newly crowned champion was healthy and able to defend. What?!

MMA Fighters React To 10 Crazy Knockouts In ONE Championship

Let's slow down here. There are right and wrong places for interim championships in the UFC. Dominick Cruz missing years of action? Yes. Frank Mir's motorcycle accident throwing his future in to question? Of course. Randy Couture's legal battle with the UFC? It fits. Conor McGregor perhaps never returning to the Featherweight division? Why not? But a promotional tool to sell a pay-per-view not viewed as deep enough without it? A little weird.

Ultimately, it's the UFC's prerogative. It is a promotional tool. Nothing more, nothing less. Max Holloway vs. Anthony "Showtime" Pettis will be an interim title fight, because a 205-pound champion (who hasn't defended his title in over a year) was sidelined. I can't make sense of that. Jose Aldo -- the new 'undisputed' Featherweight champion is healthy. Say what you will about the way he lost to McGregor, but he's the top 145-pounder today, as McGregor relinquished his title.

What's wrong with the fight being a number-one contender's bout? Where's the harm there? Promoting Aldo to undisputed champion eliminates the need for an interim title, it doesn't facilitate the need for one.

There are some situations that tiptoe the line. Conor McGregor's return is uncertain. Maybe May, maybe later as he awaits the birth of his first child. However, him relinquishing the 145-pound championship leads me to believe he sees his future at 145 pounds. As we've seen with McGregor, he defies belief, and him hunting the 170 pound championship isn't out of the question. Should the UFC book Khabib Nurmagomedov and Tony Ferguson in an interim championship fight? They both deserve it, but participation medal championships in MMA are a dangerous thing to embrace.

That's happened in the past. Tito Ortiz defended his light heavyweight championship with regularity -- four times in under a year. It took him over a year between his Vladamir Matyushenko and Ken Shamrock defenses, and the UFC wasn't willing to let that happen again, and scheduled Randy Couture vs. Chuck Liddell for an interim title just eight months later. Tito would return less than three months later and fight Couture, losing his championship.

Earlier this year, Jon Jones vs. Ovince Saint Preux for the interim UFC Light Heavyweight Championship was booked after Champion Daniel Cormier was sidelined. Jones would later be stripped of the title, but the UFC seemed keen on booking his new challenger Anthony "Rumble" Johnson against middleweight standout Gegard Mousasi for the interim title, until Johnson declined the bout for UFC 206.

I get the feeling "Rumble" didn't know the severity of Cormier's injury. The 205-pound champion revealed on Monday's MMA Hour that he's trying to decide between resting of surgery, and a best case scenario is late February or early March for a return. While that doesn't seem too bad, Cormier is 37-years old, and has been battled knee problems for years. Couple that with the fact that it's already been 14 months since Cormier defended his title, any set back could easily push that to 20 months. Cormier himself seems okay with the idea of an interim title.

Here's the conundrum -- Rumble Johnson has already destroyed the rest of the division. #2 Alexander Gustafsson, #3 Glover Teixera, #4 Ryan Bader, #5 Jimi Manuwa, #10 Antonio Rogerio Noguiera, all stopped by Johnson. #6 Ovince Saint Preux has lost two of three, while the likes of Nikita Krylov, Corey Anderson, Ilir Latifi and other top-15 talents don't have the name value to compete for an interim title. The UFC's two most realistic options are a 35-year old, past his prime Mauricio "Shogun" Rua, or middleweight Gegard Mousasi. Mousasi is a former DREAM and Strikeforce Light Heavyweight Champion, who has actually found more success above the middleweight division. As mentioned, the UFC tried to book this fight, but Johnson turned it down, instead opting to wait for Cormier.

The UFC's interim title situation is being used as a short-term solution for UFC 206, when there's no real problem at 145 pounds. Jose Aldo is the champion -- that's it. He was beaten by Conor McGregor in short order, but McGregor left the division, and probably isn't coming back. Only in the world of MMA can a 205 pound champion -- who is undefeated at heavyweight, cause the 155 pound champion -- who is also undefeated at 145 pounds, to vacate a second championship.

It could be worse, the WWE had interim champions in matches that actually featured the undisputed champion. Make sense of that and count your blessings MMA! 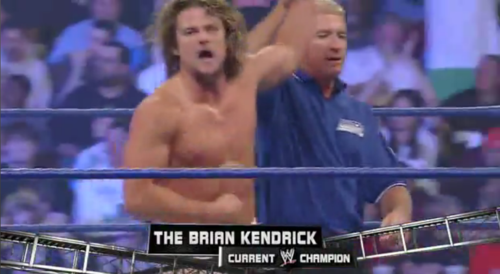