What Do The Experts Think About Mayweather vs. McGregor?

Forget the extreme tension between Mr. Trump and Mr. Jong Un; the real apocalyptic showdown is just around the corner, with semi-retired professional boxer Floyd Mayweather and plucky MMA upstart Conor McGregor ready to clash at the T-Mobile Arena in Las Vegas on August the 26th. The most hyped boxing match for a long time has fans, fighters and pundits foaming at the mouth with excitement and long campaigns jammed with arena-filling trash-talks, intriguing public training sessions and plenty of mud-slinging to the media have raised the profile of the match to stratospheric levels. The real question however is what the seasoned experts think of the whole spectacle.

Floyd Money Mayweather should be going into this match with plenty of confidence. The 49 for 0 veteran frequently tops experts' lists as the greatest pound for pound boxer of all time and has seen off some of the best ever, including Hatton, De La Hoya and Pacquiao in a stunning career that has seen him generate over a billion dollars in revenue. His opponent McGregor in comparison has never fought in a professional boxing match. Ever. But that doesn't mean he isn't hot property, responsible for bringing the most viewers to mixed martial arts fights, fighting in 4 of the 6 most watched MMA matches in history and boasting a 21-3 record with 18 KOs.

Bobby Lashley Has Had Talks With Bare Knuckle FC, Still Under Contract To Bellator MMA

The key information surrounding the fight

Although the void between fighters is huge, a lot of experts aren't quite writing off the Irishman yet. Mayweather's technique, speed and most importantly experience should still easily be enough to see off boxers way better than McGregor, but the 3 time UFC belt winner across 3 different weights still has some killer moves that may just translate from octagon to ring. UFC President Dana White, who is himself an ex-boxer, reckons that McGregor's left hand counter is unstoppable, no matter who you are and that McGregor will have a few MMA tricks up his sleeve that Mayweather won't see coming. Former fellow UFC fighter and Showtime analyst Brendan Schlub feels that getting to Mayweather from the get-go is the best strategy, telling the New York Post that McGregor needs to shock Mayweather in the first few rounds, otherwise Mayweather will completely dominate once he finds the rhythm.

One very qualified opinion comes from Andre Berto --s the last man to fight Mayweather. He believes getting into Pretty Boy's head is the way to win, but doesn't see McGregor getting close to Money. He also mentioned that trying to hurt Mayweather early is the best chance of emerging victorious. Lyle Fitzsimmons, who covers sport for US media outlet CBS is completely convinced of a non-contest and was quoted as saying that the only way McGregor can win is if Mayweather 'dies on the ringwalk'.

The facts and the figures behind the fight

The two boxers differ in style so unsurprisingly the statistics show that we could be expecting a fight that is out of the ordinary. The first figures of note are the weight fluctuations throughout their careers. In 2016 McGregor rose through the weight divisions in order to fight Nate Diaz at welterweight, this made him the UFC fighter in history to hold two championships from different weight-classes simultaneously. 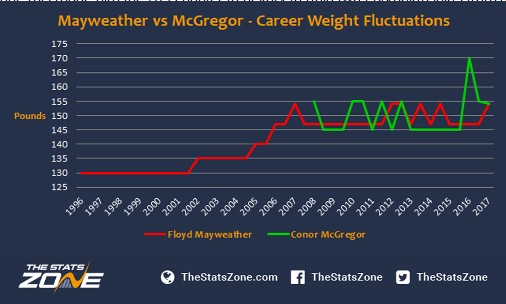 Each fighter’s recent fight stats make for interesting reading, the statistics from the last 10 fights show that McGregor is going to have throw a lot more punches to fight at the same pace as Mayweather. It is worth noting that they have been competing in different sports, this has resulted in McGregor also receiving far fewer punches than his upcoming opponent. Stats such as these emphasise how difficult it is to know what to expect from the bout. 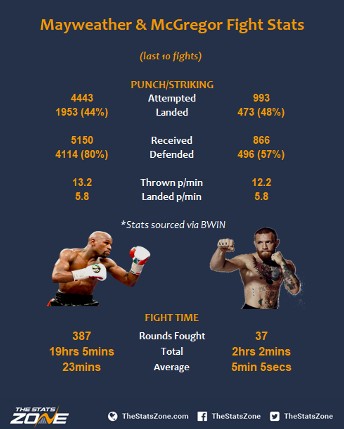 One thing that is for sure, both fighters are incredibly successful. Their combined career honours add up to a staggering 16 championships. As previously mentioned, McGregor made history after he held two championships at different weights, the first time ever in UFC history. While Mayweather has dominated the welterweight division for what feels like a lifetime. McGregor can be classed as young in comparison to his opponent, he won his first belt in 2012, while Mayweather burst on to the scene in 1998 with a eighth round technical knockout over Genaro Hernandez. Clearly they are both keen to add to their honours, with McGregor already stating that he wants to dominate boxing for years to come, he needs to get off to a good start on August 26th first! 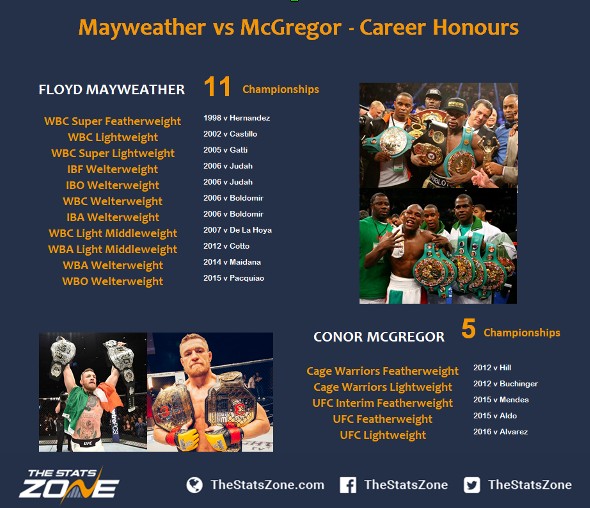 How does it compare to previous fights?

Muhammad Ali, formerly known as Cassius Clay, is regarded by many as the best boxer ever. Throughout his career there was a huge sense of anticipation before he got in the ring and he certainly helped to fuel it. Before his third fight with Joe Frazier his press conferences alone made headlines, similar to upcoming fight on August 26th. As always, Ali had plenty to say before the fight, while Frazier stayed quiet. In the end Ali was victorious, but it was certainly close. Ali reportedly urged his corner to throw the towel in, describing it as “the closest thing to death” he had ever known. The bout has since been referred to as one of the most brutal title bouts in boxing history. If McGregor and Mayweather can treat us to a fight that is half as intense then we are in for a treat!

Although the boxing will certainly be ferocious thanks to the insane levels of trash-talk in the build-up to the main event, the elephant in the room at the moment is the amount of money that both boxers are set to make. As well as the ringside seats trading hands for around $80,000 online and a gate on the night of almost $80 million, the pay-per-view income is expected to come close to half a billion dollars, with boxing fans in the US and UK expected to pay $100 (£76) to see the fight in HD. Arnold Schwarzenegger, Donald Trump and even Barack Obama are rumoured to have declared their interest in attending and everyone worth their salt in the boxing community is clamouring for an AAA pass. What these insane figures don't take into account however are the bets and wagers being laid on what could be the biggest boxing upset of all time.

The popular online casino, 888casino have put together a fantastic blog post on the subject, covering not only what the fighters are set to walk away with, but also what the fight means to other stakeholders and the odds on Mayweather vs. McGregor. The stature of the fight will ensure that the amount of money that will be made by online gambling providers, casinos, bookies and winning gamblers from the boxing match will phenomenal.

The fight of the century?

Although the bout build-up is getting fans both new and seasoned hot under the collar, there is a fair amount of cynicism surrounding the match. Many fans believe that the fight certainly won't be a boxing showcase and is more of a vehicle for the retiring Mayweather and UFC convert McGregor to cash in. The level of vicious fighting talk in front of crowds of hundreds has been likened to professional wrestling and many traditionalists feel this is detracting from the boxing itself.

Despite the divided opinions and almost universal agreement from the pros that McGregor will be on the back foot no matter what and a smattering of believers who reckon Mayweather has chinks in his armour, one thing is for certain; no matter who wins the fight, there will certainly be millions of new boxing fans ready to cheer on the next big McGregor fight if he makes it through this one in one piece.