When Keeping It Real Goes Wrong: Conor McGregor And UFC 229

Conor McGregor became the biggest star in MMA history by being brash and unapologetic. His verbal warfare became stuff of legend as he cut down everyone in his path with his quick wit and sharp tongue. No one was safe from McGregor's wrath, not even those he would never step foot in the cage with. With a rising star comes rising support. The entire country of Ireland got behind their most famous countryman. McGregor repeatedly touted that the Irish were not there to take part, they were there to take over. The only match for McGregor's cleverness was his loyalty. If you messed with one, you messed with all.

In April, Artem Lobov, McGregor's friend and training partner was confronted by Khabib Nurmagomedov over comments made by Lobov. Nurmagomedov, backed by a couple members of his team, was upset by comments made by Lobov. When asked to own up and say those comments to Khabib's face, Lobov denied and backed down. A wise move for a man outnumbered. Khabib lightly grabbed Lobov by the neck before the two were separated without further incident.

McGregor got wind of the confrontation and jumped on a plane from Ireland to Brooklyn. Conor McGregor was about to keep it real. 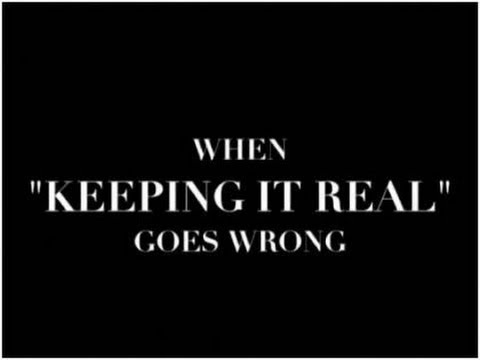 When McGregor arrived in Brooklyn, he was ready to turn New York into the Dead Rabbits against the Natives. McGregor, flanked by members of his entourage, stormed the Barclay's Center, looking for retribution for what happened between Lobov and Nurmagomedov. Unable to confront Khabib directly, McGregor settled for tossing a dolly at a bus occupied by Khabib and his team.

The end result was a slap on the wrist by the New York authoritative department, the juiciest footage in UFC history, and the biggest fight of all-time.

Leading up to the fight, McGregor continued to keep it real. He attacked Khabib's family, religion, team, and country. None of this was new for the former Lightweight champion. He's become revered for his ability to get into opponent's heads with his verbal and physical antics. With Khabib, McGregor went a step farther. He tried to start a gang war on a loading dock, then hurled insults Khabib's way for not getting off the bus. He dug up dirt on Khabib's management and past. He openly accused Ali Abdelaziz, Khabib's manager, of being "a terrorist snitch." He called Nurmagomedov's father "a coward."

Khabib Nurmagomedov was the wrong person to keep it real with.

The Lightweight Champion dominated the former title holder. He took him down almost at will, rocked him standing, controlled position, smashed him on the ground, and eventually submitted him in the fourth round. It was a masterful performance that made McGregor look two classes below him.

If McGregor was trying to get into Nurmagomedov's head with his words and research, it backfired. Not only was Khabib not rattled, he looked more confident than ever.

The post-fight brawl only solidified Conor's pre-fight actions. You can't try to start a war, call the man out for his association with warmongers, promote a war; and then be surprised when a war erupts.

Once a bulletproof meal ticket, Conor McGregor is now a man at a crossroads. Nothing about his UFC 229 performance suggests a rematch would be competitive. And because the fight was one-sided and McGregor's antics had the opposite effect, there's little he could -- or should -- say if a rematch were booked.

McGregor has been humbled like never before and may not be the same fighter when he returns to the cage. All because he tried to keep it real over Artem Lobov.