Adam Cole, Kyle O'Reilly, and Bobby Fish have a new t-shirt which lays claim to being the New Undisputed Champion of merch. 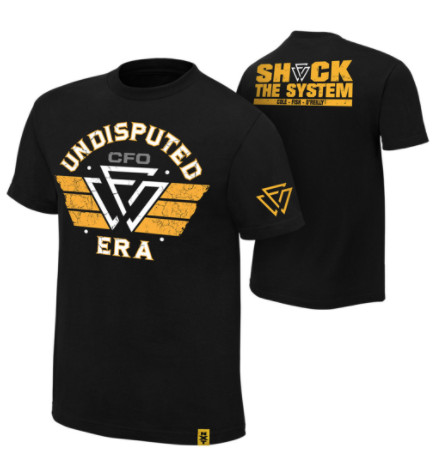 Doc Gallows: Ethan Page Is A Star, Josh Alexander Will Be A Singles Star

"The Undisputed Era" might sound a little clunky, but it's official.

Get used to it.

The shirt also features "CFO" written in entangled triangles. Triangles are often seen on Brazilian Jiu Jitsu school logos, which would be complimentary to the mixed-martial-arts influence on the stable. On the back of the t-shirt are the words "Shock the System." Kyle O'Reilly and Adam Cole were in a tag-team together called "Future Shock" while in Ring of Honor and Pro Wrestling Guerrilla.

On Wednesday O'Reilly tweeted a link to WWE Shop where the shirt could be bought.

The Undisputed ERA is now. Support our revolution with the official T-shirt. CFO. https://t.co/fjgi1NmeEk pic.twitter.com/A47bT1nshV

Since then O'Reilly, Fish, and Cole have been attacking Sanity and McIntyre on NXT, but none of the members of this group have had a match since before NXT Takeover: Brooklyn III.