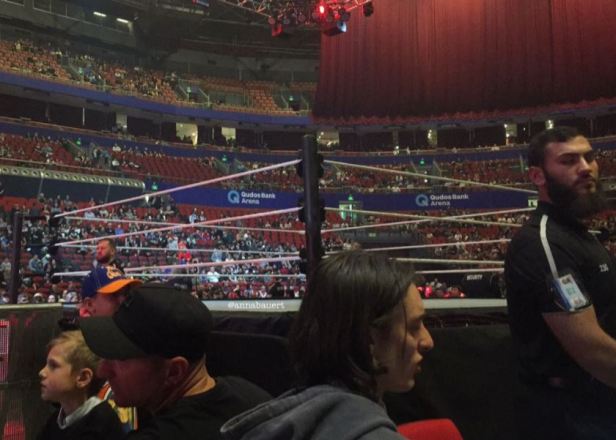 Me in my Dilapidated Boat t-shirt. The anticipation was overwhelming.
No, Rich Swann. I cannot handle this.

JoJo introduces Jason Jordan-Angle’s dad to the ring to kick off the show. Angle is met with a serenade of “You suck!” – it’s an overwhelming display of love, and Kurt Angle looked over-the-moon to be there. Actually, that seemed to be the majority impression from the roster tonight. And from a company of people who spend most of their careers travelling, it was really great to see.

Papa Angle announces the first match of the night: A Battle Royal to determine the #1 Contender to Miz’s IC Championship.

BATTLE ROYAL: Goldust vs Titus O’Neill vs Elias Samson vs Jason Jordan vs Apollo Crews vs The Miztourage (Bo Dallas & Curtis Axel) vs Beauty and the Man Beast (Health Slater & Rhyno) vs R-Truth vs Dean Ambrose

Goldust was out first, and from a personal viewpoint but also because it’s freaking Goldust, it was really cool to see him. The man is a living legend. Titus Worldwide BAAAAABEY was out next repping himself – though no actual mention of the brand or his connection with Crews or Tozawa tonight. We did get a whale's vagina bark though, so that was cool (*please see earlier podcast for reference, otherwise, I am sorry).

Next out was Elias... I did not know Elias would be here tonight. And as a result, I may have popped a little harder and louder than anyone else in that arena. Unfortunately, no John Mayer performance. The crowd was sadly a little quiet on his reception. My overriding impression of the audience was they were majority casual viewers, but in regards to Elias, I have a strong feeling in a year’s time Sydney will be feeling the toasty warmth and comfort of a good roasting, topped with a guitar smash chant. Just like a mother’s hug.

A lot of boos for Jason Jordan (apparently nepotism really isn’t appreciated in Australia). Beauty and the Man Beast (I will never not call them that) came out to a giant pop, and a lot of people took the time to remind each other “He has kids”. They left a dramatic pause before Dean Ambrose music hit, and the Shield lover in my heart did a tiny backflip before I remembered I was in mourning since they pulled Seth Rollins from the tour without a word. Ambrose received one of the biggest pops of the night.

I loved this match. It was a great way to open the show, but the thing that really got it over for me was how much fun they all seemed to be having. As I said, pretty much every single person on the roster seemed happy to be here. I don’t know why that struck me so much, but maybe because I know what that flight from America is like.

- Slater and Rhyno corpsed during a spot where they were manhandling someone. I have no idea what happened. I like to think it had something to do with Cheez Whiz

- Goldust was eliminated by R-Truth. I just really appreciate the continuity there (which didn’t happen a lot tonight)

- The Miztourage launched Bubba Angle into the ring-post, after which he proceeded to slide out between the 1st & 2nd rope (CHEKHOV’S GUN)

- Miztourage eliminated Dean Ambrose, much to the horror of the crowd

I still Bo-lieve too, buddy.

And with their backs turned, celebrating their victory and momentarily forgetting one of them would now have to turn on the other for total domination, Jason Jordan slid back into the ring like it were a DM and toppled Dallas & Axel over the top rope via DISTRACTION FINISH. (When will these kids learn?!)

More booing for nepotism, but good on the Adonis nonetheless.

Enzo was out first to a pretty decent pop. As you can tell by my accompanying video, I was thrilled. Tozawa came out to a more tepid reception – and this goes back to the majority crowd being casual viewers who definitely missed the NXT tour last year, otherwise, they would know better. The King also came out to a nice reception as he skulked his way to the ring.

Enzo started the match by doing his best impression of a constipated seal before immediately being chucked out of the ring by Neville. This was the on-going theme of the match. Alex Pawlowski would’ve loved it.

Most of the in-ring action was largely Neville vs Tozawa, but momentarily turned into Neville vs the crowd. Neville stopped a few times to address the chants of “You’re a wanker” / “Neville’s a wanker” – the 2nd time to which he rolled out of the ring to pull Enzo in, only to throw him out again.

Neville looked like he was having a lot of fun messing with the crowd and beating up the good guys (Good guy. Tozawa. The other is debatable). It ended with Neville beating Tozawa, and tossing the title across the ring before strutting out, shooting death-stares and yelling insults. Neville got in the face of one guy by the entrance who was trying to rile him up. The same guy was quickly kicked back to his seat by security after he apparently called the guard a “wanker”... 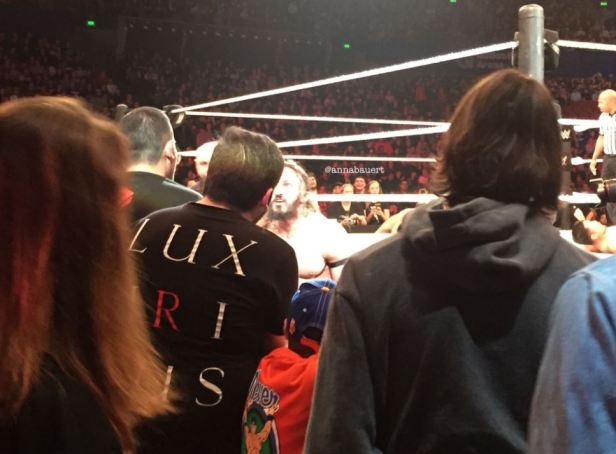 BUT WHILE WE’RE ON THE SUBJECT: This young man in what I’m guessing would be his early 20s was a part of a group sitting at the end of my row. Before and after every match, they would run over to the guard rail for photos, mowing us down in the process. At one point about ¼ way through the 1st half, one of them kicked over a lady soda onto her son’s memorabilia without a second glance. They were told repeatedly not to run down by me, the father next to me, security... yet to no avail. The reason I bring this up is because of the conversation the woman had with the father on my other side. Her son is 12, and she said this was okay for now, but he will not be allowed continue his fandom of wrestling when he grows up so he doesn’t become like one of those boys. The father of the 10-year-old agreed. It made me really sad.

TAG MATCH: Sheasaro vs The Hardyz 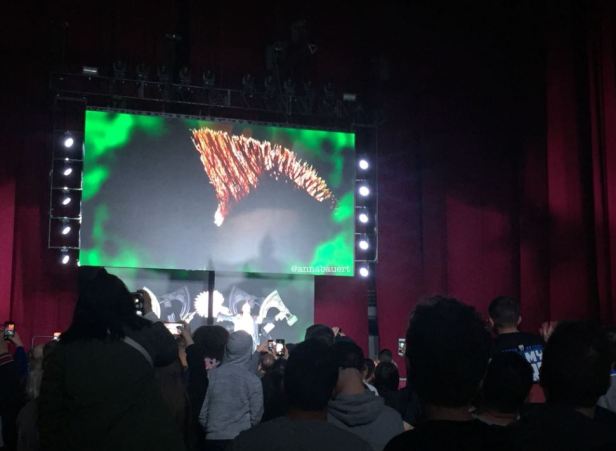 The Crimson Dream. That's not my camera, he's just that white.

So... Sheamus is white. Really white. Like, impressively so.

Impressive pop for the Hardyz – there were a lot of ‘Jeffs' dressed up in the crowd tonight.

I was a little surprised by how many “delete”, “Brother Nero”, and “obsolete” chants there were. Having said that, I also witnessed one of the sweetest father/son bonding sessions over the Hardyz tonight, so maybe I shouldn’t be so surprised.

Sheasaro (no I will not call them The Bar) are really damn good together. Remember how this all came about? The seemingly never-ending best of seven before randomly being thrown together by Mick Foley?? Good call, Santa. Good call.

Sheamus was met with a lot of “You look stupid chants” which, from his tired look of desire to brogue kick every single person in that stadium, tells me he gets this a lot. There was also a chant of “Where’s your sunscreen?” to the Irish Cream, which I found a little silly. I mean, obviously, he’s used it all.

A very entertaining match with Jeff taking the brunt of the hits, but fortunately no teeth were lost in the making of this match. Matt won with the pin on the Ginger Ninja.

The Hardy Boyz: bringing people together since '93

BATTLE OF THE MYSTICS: Bray Wyatt vs Finn Balor
(a.k.a. The battle of the awesome entrances.)

I’ve heard a lot about what it’s like to experience Bray’s entrance live. It 100% lives up to the hype.

Wyatt attacked Balor pre-bell and pre-jacket take off, and a few people in the crowd seemed pretty upset by that. Fair enough, I guess. It is a really nice jacket.

There was a surprising amount of “Husky Harris” chants. At one point someone attempted a “Wyatt’s a cheater” chant which quickly failed -- I can safely bet they weren’t referring to his in-ring methods.

I hate to say it, but seeing Bray live made a little sad for a couple of reasons:

Balor looked great in-ring, I swear that kid eats air for dinner. I legitimately could’ve washed my shirt on his abs. 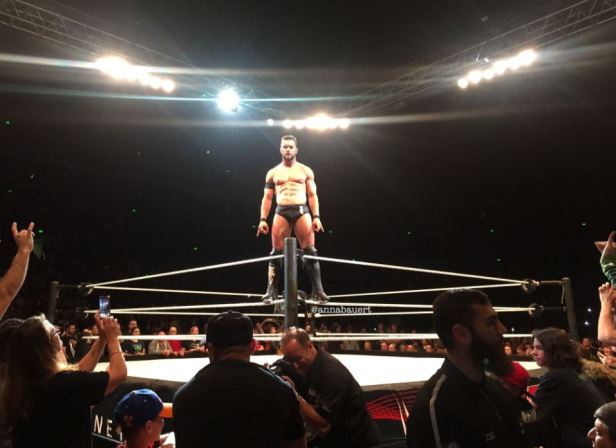 Bray did his signature exorcist bend in the corner, the kid next to me commented his hair looked like spaghetti. And thus enlightenment was achieved.

Balor eventually won with the Coup de Grâce. Balor then jumped on the mic to cut a really cheesy speech which sounded a tad by rote. He mentioned the Australia/Ireland comparison, which I guess is a thing. Both nations are known for drinking, and technically a lot of our ancestors are of his people, so, sure. (Except me. I’m one with the OG convict, Pete Dunne)

Sasha was out first and seemed to have a lot of fun interacting with the crowd during the entrances. Good to see the flappies were out in full force on Mickie James (which reminds me to order the custom-made Ya Boy ones for SRS this Christmas). Emma came out to her new theme – “It’s All About Me”. I guess this is her version of “Burn It Down”, which got me thinking pyromania and narcissism would make a very interesting tag team.

Lots of Emma chants, which was really nice to hear.

It’s impressive to see Jax do those monster moves. At one point, she grabbed Banks by the ankles, dragged her out of the ring and tossed her into the guardrail like a damn ragdoll.

There was a fun continuation of the storyline between Bliss and Jax, with Bliss about to launch herself from the top rope before Jax caught her in the act, which lead to her slowly backing down. They would later get into an argument which ended in Bliss slapping Nia, before instantly regretting every decision she’s ever made up to that point in her life. 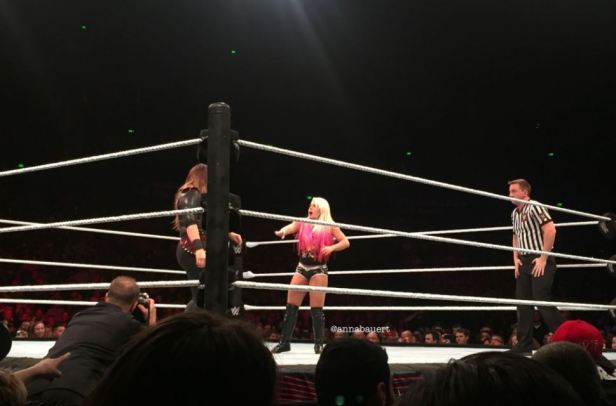 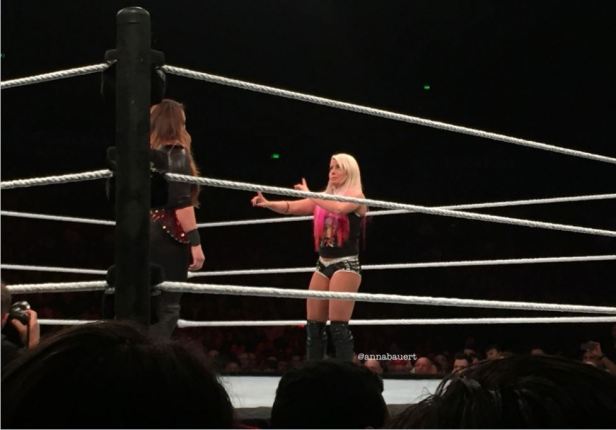 There was a combined effort to get Jax over the top rope. Emma and Alexa teamed up against Sasha, which is a duo I am all for moving forward. Bliss eventually won with the pin on Emma, because of course she did. A very entertaining match, all the women looked strong and had spots to shine.