Baron Corbin is Not Here to Make Friends, Thinks WWE Fans are 'Idiots'

Talking Smack continues to be one of the best shows on the WWE Network.

Last night, Mojo Rawley gave Daniel Bryan a funny hat, AJ Styles demanded a revenge match against Dean Ambrose, and Baron Corbin, fresh off the total destruction of former World Champion Jack Swagger (which you can watch above), talked about his Lone Wolf philosophy and how it makes him a serious threat in the WWE.

On Not Being Liked:

The fact that people don’t like me, doesn’t bother me. I’m not going to shed a tear for not being liked. I’m not here to make friends, I’m not coming here to make a best friend who is going to be at my wedding, or somebody who I can call if I am frustrated. The reason I am here is to make money, it’s that simple. If someone wants to be my friend, too bad. If you want to call me a loner because of it, because I don’t need people, then so be it. If I have a friend, when I have a match, and you have a match with that person, then most people hold back, I’m not. I’m going to get the job done for me, I’m going to collect that check and move up the ladder.

Did He Have This Mentality When he Played Football?:

No, my attitude and the way I carry myself has never changed. If you look up what I did in Arizona, you’ll see that I fought my way through training camp. I didn’t have a problem fighting my teammates. They weren’t my friends, they were my teammates, and I worked with them to accomplish our goals. But, at the end of the day, if I have to punch you in the face, during practice, then I’m going to do that, and I had to do that several times, and that is what helped keep my job, and helped me get paid. My Offensive Line Coach was an original Hog, and Offensive Linemen are naturally nasty and mean people, and that is what we did. If it’s your teammate that is getting in front of you to achieve your goals, then I have no problem putting them down.

FYI, Corbin's Offensive Line Coach with the Arizona Cardinals was NFL Hall of Famer Russ Grimm, a Guard for the Washington Redskins in the 1980s.

The offensive line was affectionately known as The Hogs, and they were the backbone of a team that won three Superbowls in ten seasons. Grimm was considered one of the toughest, strongest and maybe even dirtiest players of his era.

If he taught Corbin even half of the stuff he knew, the WWE roster is in big trouble. 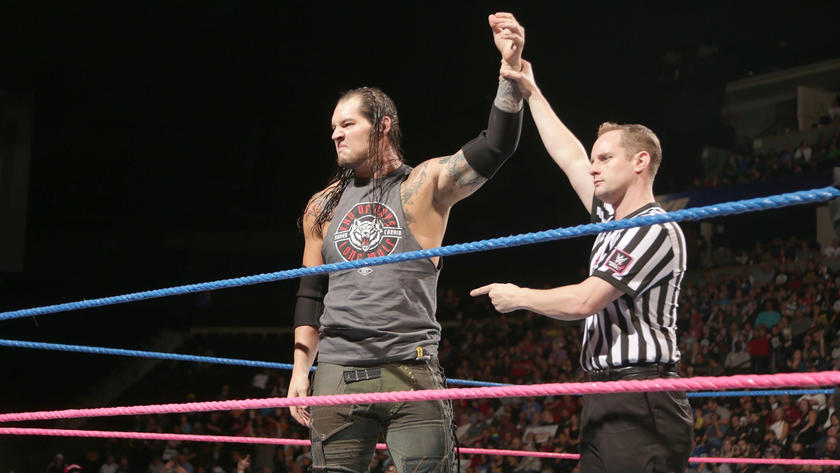 On His Hatred Towards the Fans:

I have a fiancée that 99% of the world dreams about. They dream they can find, but will never find something like that. People like me, people like the 1% get the 1%, so off time for me I live in a big house with a lake and a pool. I have music and video games, I can take my bike out for a ride. I’m looking at a 1964 Lincoln Continental right now, so I’m working on that. I just do my thing. I go to a lot of rock metal shows, and I enjoy my time to myself and my fiance enjoys those things too, and you know, we don’t need people to do that. I have a close group of friends, but they’re not here. I don’t care about the people that work here, I don’t care about the fans who sit in the stands. These fans are a bunch of idiots. They sit there and boo you and tell you they hate you, but then they are the first person in the airport waiting in line at 5am waiting for you to sign an Action Figure. Half of these people print something off of a computer because they don’t want to buy your merchandise, and they want to go and sell it because they want to avoid getting a real job. They are trying to make money off of my back, and I think that is stupid and ignorant. People that try and think they can go and make money off my back buy signing an Action Figure for them and then go put it on EBay. A lot of people need to realize–see, without someone like me, you don’t have a job. You don’t sit here and interview on the table, because you don’t have a superstar like me to sit here and draw people into watching this show. People like you need people like me to draw people in. You know, you bring in these little guys who have wanted to be wrestlers their whole life, telling their tired-sob story about why they are here; something they have dreamed about since they were six years old. They saw someone on TV and that was who they wanted to be like. That’s not a superstar; that’s these guys who sit at home in their Mom’s basement on Twitter and run their mouths, and their favorite wrestlers thinking that they can be like them.

So this whole "I hate the fans" thing may not be a confirmed shoot, but you never know.