Billy Corgan reveals his plans for the National Wrestling Alliance in 2019.

While answering fan questions on his Instagram Story, NWA President Billy Corgan was asked, "What's in store for NWA in 2019?" 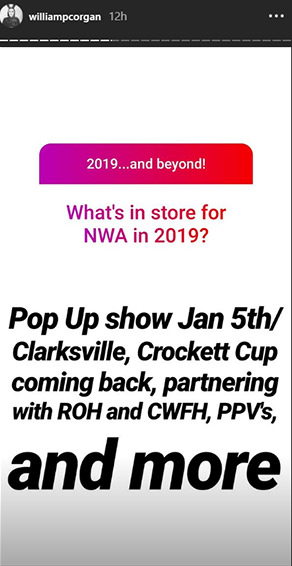 The NWA has already announced their first-ever pop up event for Jan. 5 in Clarksville, Tennessee. The event will be headlined by Nick Aldis defending the NWA World Heavyweight Title against James Storm. Also on the card will be Willie Mack defending the NWA National Title and Jazz defending the NWA Women's Title. The first qualifier bout of the Crockett Cup is also scheduled for the Jan. 5 event.

Corgan and company ran their first NWA pay-per-view this past October when they celebrated 70 years of NWA wrestling. NWA 70 was an in-ring success, but the show was knocked for production issues, which Corgan addressed following the show. Corgan said in a statement that the organization "has much work to do." A return to pay-per-view has yet to be announced.

NWA already has a loose partnership with Ring of Honor and Championship Wrestling from Hollywood. Cody Rhodes defended the NWA World Title at an ROH event in September. Meanwhile, Willie Mack just defended the NWA National Title against Samuel Shaw at CWHF Milestone on Dec. 9.