So there have been rumors about Dwayne "The Rock" Johnson perhaps, maybe, possibly running for President.

Of the United States.

As a matter of fact, there have been so many rumors about this possible run, that, as you can see in the above video, Johnson has had to answer questions about this rumored foray into politics during appearances on national talk shows.

Well, maybe there's something to all these rumors. Because a filing was made with the Federal Election Commission to register a campaign called "Run the Rock 2020."

And no, I am not kidding.

Yes, we now have an official draft @TheRock political committee registered with the @FEC. pic.twitter.com/ylQxuZkOev 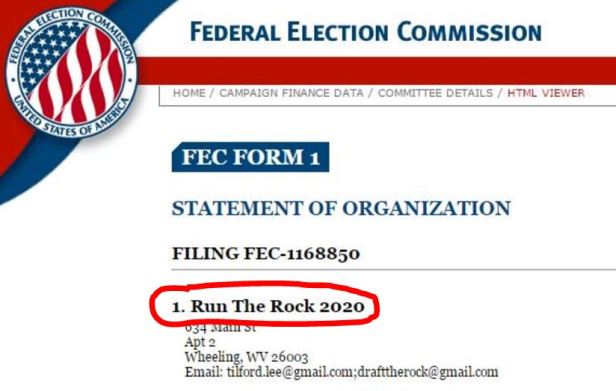 Now, this doesn't mean anything really. The Rock hasn't declared that he's running for president. This organization isn't even officially tied to Dwayne Johnson.

This is just a filing saying that if "Run The Rock 2020" wants him to, and they're going to gauge public interest, and if there's enough, they'll going to try to recruit him to be our next People's Champion ... er, Commander In Chief.