A casting call obtained by Fightful.com indicates that a "lucha libre" inspired program could be filming through next year. Apparently, it's not who you would think.

Fightful.com received a call for non-union actors for a pilot of a pro wrestling show described as "similar to WWE Raw and Smackdown, but will have an element of Lucha Libre to it." The Santino Bros. Wrestling Academy will host the audition on October 21. It's noted that Spanish isn't required, but is a plus.

Also mentioned was that the production company have produced multiple episodes and pay-per-views in wrestling. You can see the casting notice below. 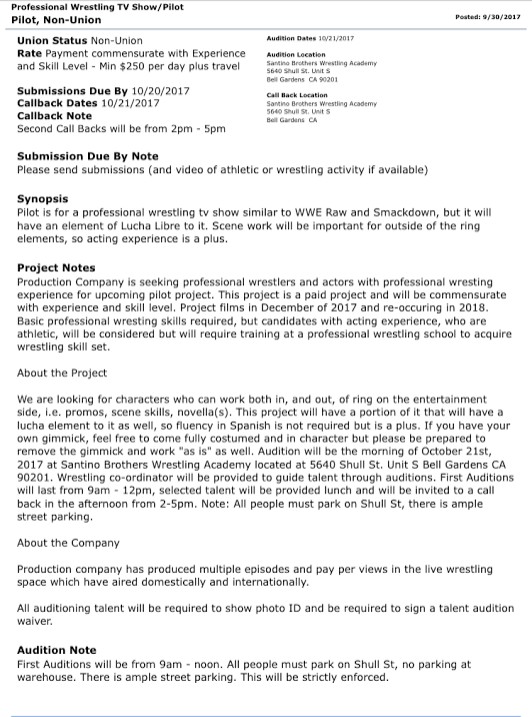 This fueled rumors that El Rey's Lucha Underground could be casting, and talent said that the timeline was in line with that they've been told would be the case if filming occured. However, Lucha Underground Executive Producer Eric Van Wagenen took to Twitter to say the posting wasn't associated with LU.

Nope. Where'd you see it?

Lucha Underground's Ultimae Lucha Tres, Part 2 airs this Wednesday on the El Rey Network. The show hasn't filmed in well over a year, and the status is uncertain moving forward.