Cody Rhodes On TNA, The Bullet Club, And If There's Anything Left On That List For Him To Do

Cody Rhodes recently spoke with the Morgan Richards Interviews podcast. The interview touched on a myriad of subjects, including his busy schedule since leaving WWE, his impressions of the Bullet Club, and his time with TNA.

Rhodes has been a busy guy since leaving WWE, with indy promotions all over the world lining up to hire him, Rhodes is keeping it all in perspective though.

Cody Rhodes On Facing Roman Reigns: I Don't Want To End Up Like TCU In The National Title Game

"It’s flattering and I keep waiting for (the bottom) to fall out, but it hasn’t. You know you’re doing something good when you develop a whole culture of people who A) are into you, or B) a whole culture of people who are not into you. It’s one of those, like the more cool stuff that we did, like TNA Bound for Glory, ROH Final Battle, the Bullet Club announcement, Wrestle Kingdom 11. It’s just like when I was a fan; you have people that you love and you have people that you hate in wrestling, and the people you hate, you just tell them why you hate them, the people you love, you tell them why you love them, the people you’re not sure about, you forget about; and that’s the thing, I just try to make sure that no one is different. You draw the line, like when people say, oh Cody owns a title and he gets everything because of his family, or Cody did his own thing and he bet on himself and so far it’s working, so whichever one is right is very flattering. I say that I keep waiting for the bottom to fall out, but we make sure to do enough work that the bottom doesn’t fall out." 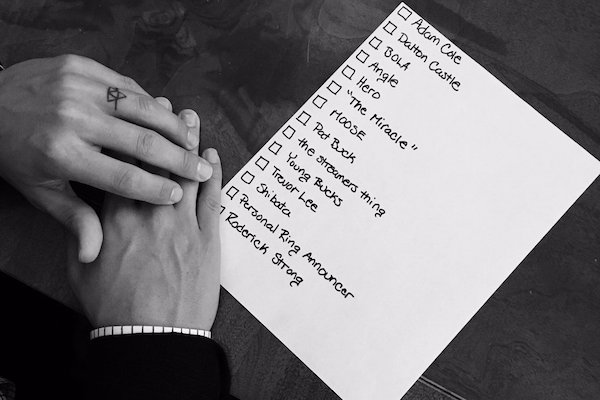 He was aked how he felt about his progress so far in completing the items on the list.

I think when it comes to the list itself, everything I can possibly do on that list will happen. The only deterrence on that list is if somebody signs with WWE because I’ll go anywhere but there, which isn’t a deterrent for them, it’s more of an opportunity of a lifetime. So I don’t get mad if someone like Roderick Strong, who is killing it in NXT, so anyone who is not currently signed by WWE I do fully intend to finish that list."

Rhodes turned heel and joined the Bullet Club back in December, and it's been a pretty successful business decision.

"(The Bullet Club) a huge opportunity. Someone earlier was telling me that they were comparing the Bullet Club to the nWo, and what I would say to that is that is my era, I loved it, there was nothing like it, but the Bullet Club has run longer and more consistently in a way if that makes sense. They consistently stayed hot thanks to Kenny Omega, thanks to the Young Bucks--to be in their unit and to be in that club, it’s like, well damn, they’re going to go out there and the Young Bucks are going to have the most amazing, difficult match of the night; Kenny Omega the same thing. It’s a nice competitive element to that, so maybe it’s not so much this on one night or this on another night, but what can I do for people to walk away and say that it was a Bullet Club night where each member of the Bullet Club performed at a high level that night. I’m looking forward to that challenge."

Rhodes had a brief stint last fall in TNA Impact Wrestling. His wife still works there. He hasn't ruled out going back.

"You want to have respect for each company as far as ROH had made a significant investment in me, New Japan made a significant investment in me so you want to have respect for them. As far as TNA is concerned, I’m open to going back. I had a really great experience, and in the middle of my great experience was during that storm with what was going on with them. Everyone from Dixie [Carter], John Gaburick, everything was just gleaming, so I definitely am going to do everything I can in this process to do what I can to go back. I think it would be a really cool thing to see a Bullet Club shirt in Impact Wrestling; it definitely appears to be headed in that direction."