The semi-regular column
that dares to ask the tough questions
and absolutely, positively REFUSES to accept the easy answers

Last Monday Night on RAW, there was a Six-Woman Tag Match that was apparently somehow not booked by Road Dogg. It featured the team of Ember Moon, Sasha Banks & Natalya taking on the Riott Squad.

During the match, Michael Cole mentioned that Riott Squad member Sarah Logan used to work on "her Uncle's Taters Farm" in Kentucky.

Immediately, I was suspicious.

For one thing, no one over the age of six has ever used the phrase "Taters Farm" to describe anything, not even a Farm That Grows Potatoes.

So Cole's statement was obviously a lie. But who was lying? Was it possible that Michael Cole was told a lie by Sarah Logan and asked no follow-ups and did absolutely no research?

So, much like Corey Graves throughout most of 2017, I decided to do Michael Cole's job for him.

I decided to find out for myself.

I started by Googling "Kentucky Potato Farm" and I came across a website called Agrilicious. They listed all the farms in The Bluegrass State that grow "Taters."

From McGlasson Farms in Hebron, to Hemmer Hill Farm in Crestwood to Hickory Grove in Pleasureville, all potato farms are listed, with links to their contact information.

I began making calls, asking for any information on Sarah Logan’s Uncle. No one seemed to have heard of him. The woman who answered the phone at Fallen Maple Farm asked me if I was from “the Gub’mint,” but before I could answer, she hung up.

Clearly, this was going to be harder than I thought.

So I decided to do what any real journalism would do. I went to find the story in person.

I booked a flight from Milwaukee to Louisville, rented a car and began driving from farm to farm.

Kentucky is lovely this time of year. I highly recommend it. But I had no time for sight seeing. I was going to find Sarah Logan's Uncle's Taters Farm, or I was going to die trying.

Little did I know how close I would come.

Nothing in my almost two year career of writing comedy articles about professional wrestling could have prepared me for where this story would take me.

During my travels, I kept overhearing that the best taters came from a farm called Possum Acres. Something in the soil, they said. It wasn't on the Agrilicious list. And the town in which it was located, a little burg known colloquially as Coal Fart Holler, wasn't on any map.

I was given a crude, hand-drawn series of directions by an old man at a gas station. He had one eye and called me "Yankee" even after I told him my name.

"Everyone knows, Yankee," he said. "If you want the best taters, you go to Possum Acres."

"That almost rhymes," I offered.

He drew me a map and I followed it as best I could. I found a sign, carved into a plank of wood, which read "Cole Fart Holer," and assumed the misspelling was unintentional, along with being almost perfectly ironic.

But there was no sign of any farm. No Possum Acres. Just a few ramshackle houses and a general store of sorts. The man behind the counter gave his name as "Dale." I got the sense he was lying, but I didn't press him further.

We talked about the weather; he was pleasant. I mentioned moonshine; he volunteered his favorite recipes. I asked him about Possum Acres, and he immediately clammed up. When I said I was looking for Sarah Logan's Uncle's Taters Farm, he went white as a sheet.

He said when he was a teenager, he and his brother were hunting raccoons in the forest one night when they came out into a clearing. There were many rows of plants growing. Underground plants.

There was an eerie light emanating from the barn, and Dale's brother "Jesse" wanted to investigate. They walked up to a window and peered inside.

It had been nearly ten years since that night, and he still couldn't bring himself to speak about what he saw in that window. But, he said, he would never get the image out of his head.

I asked him if he could draw what he saw. He told me he would try.

This is what he drew: 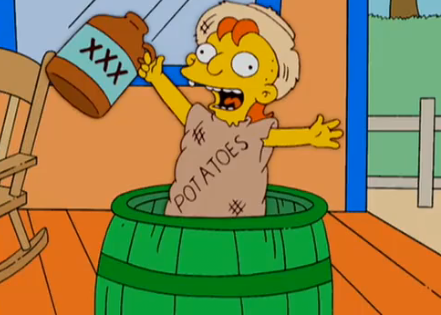 This man "Dale" told me that he believed that the potatoes from Possum Ridge weren't really potatoes at all, but BABIES.

IT'S A BABY FARM.

It should be noted that I never really got a confirmation that it is Sarah Logan's Uncle who owns Possum Ridge, but I was able to determine that, among all the other Potato Farms in Kentucky, none of the owners has a niece named Sarah.

So the only other alternative is that Michael Cole was spouting utter bullshit on Monday Night RAW.

And we know that's not the case, right?

WE JUST HAVE TO CONNECT THEM.