As reported exclusively on Fightful.com earlier this week, former Ring of Honor World Champion Michael Elgin is pursuing legal action against a woman he says defamed him after she released screenshots of conversations they had.

Elgin's attorney Steven Kratky issued Fightful a press release at our request on the issue:

Michael Elgin has filed suit against an individual who has defamed him and wrongfully invaded his privacy, according to the petition filed in the Warren County, Missouri, Circuit Court on February 9th. Elgin, whose legal name is Aaron Frobel, has sued a wrestling fan who uses the name “Moses Malone” on Twitter, claiming that she has lied about the nature of their relationship, falsely stated that he is “abusive” and a “predator,” and falsely stated that he engaged in a “cover-up” of a sexual assault. The lawsuit also alleges that Malone, whose real name is (NAME REDACTED), has placed him in a false light by wrongly associating his name with men who sexually assault women and in opposition to the “Me Too” movement, and publicly disclosed private facts. “It is really unfortunate it has come to this,” said Elgin’s lawyer, Steven Kratky. “Some claims Ms. (REDACTED) is making about my client are flat-out lies and misleading falsehoods. Mike really struggled with this decision, but ultimately realized that he had no other choice to conclusively establish the truth and clear his name,” he continued. Kratky went on to say that all other attempts to set the record straight had failed, and that his client is not motivated by money. “Look, Mike is only suing to establish the truth: that he is not an abuser, did not abuse Ms. (REDACTED), and did not cover-up a sexual assault,” Kratky said. “The only way to properly do that is through the judicial process, and Mike looks forward to that and putting this whole sad business behind him.”

The defendant accused Elgin of supporting an alleged sexual assailant by continuing to book him on wrestling shows after the accusations were brought to Elgin's attention. The situation has also resulted in a major fracture in the Powerbomb TV service, and Elgin being removed from several shows, which is the basis of his lawsuit.

Fightful.com was able to obtain several exhibits filed in the lawsuit, including one that actually features a Fightful article. 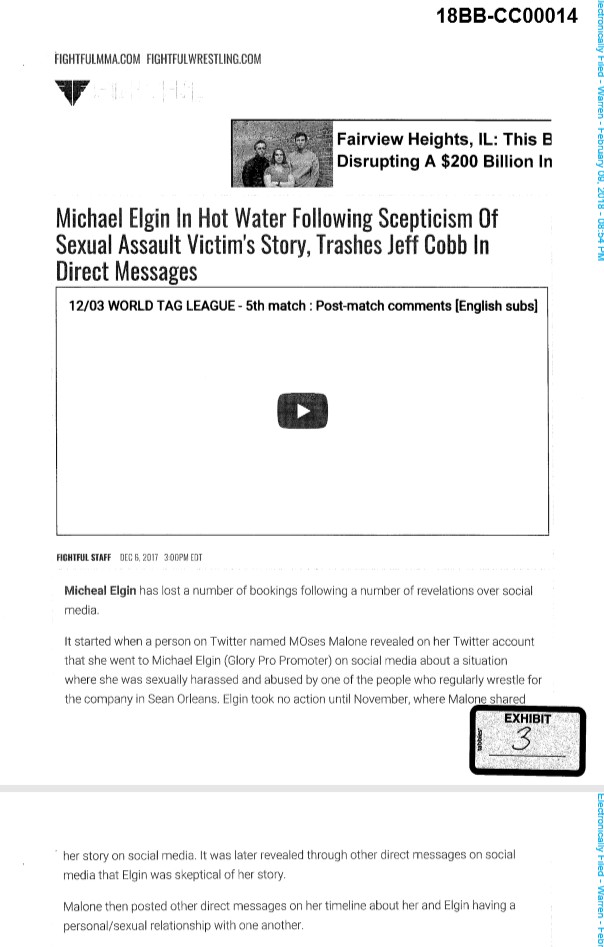 You can see documents from the suit, uploaded by Ryan Satin, at this link.