EDIT: It's come to our attention president of New Japan's parent company, Bushiroad, Takaaki Kidani stated the company began reporting its real paid attendance numbers on its website beginning April 29, 2015. Readers should bear in mind the likely differences in the nature of attendance metrics before and after that date.

New Japan Pro Wrestling just wrapped up its annual G1 Climax tournament, in which Kenny Omega was elevated as one of the company’s top stars.

Arguably three of New Japan’s top five stars left the company earlier this year. Shinsuke Nakamura and A.J. Styles memorably fist bumped after a classic match at the Tokyo Dome on January 4, both by then knowing they were WWE-bound. Kota Ibushi hasn’t appeared for New Japan since October 18, 2015, since he went out with a neck injury, and no one knows for sure whether the Cruiserweight Classic favorite will really end up with WWE permanently, whether he’ll reappear in New Japan, or what the long-time DDT mainstay will do.

While competing aces Hiroshi Tanahashi and Kazuchika Okada remained in the company, it was fair to expect business to take a hit. 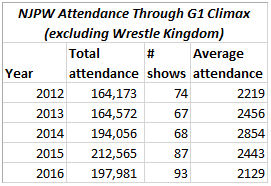 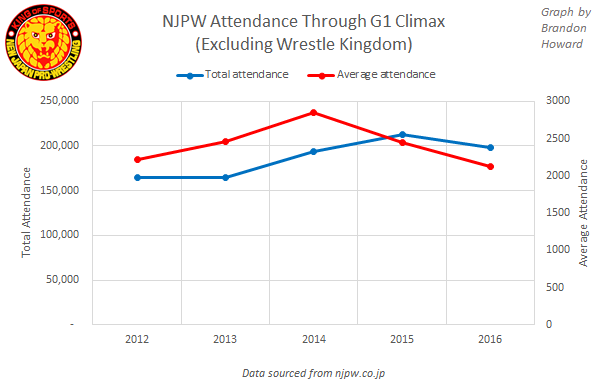 When comparing this year to last year, tour-by-tour, 2015’s tours edge out most of this year’s tours so far. One of the exceptions is the FantasticaMania tour, which was the last full tour Nakamura worked for the company. Fans’ knowledge that Nakamura was on his way out likely helped attendance.

This year’s Best of the Super Junior tour did almost an identical average attendance as last year’s. The most important tour of the year, however, the G1 Climax, actually did better in 2016 than in 2015. 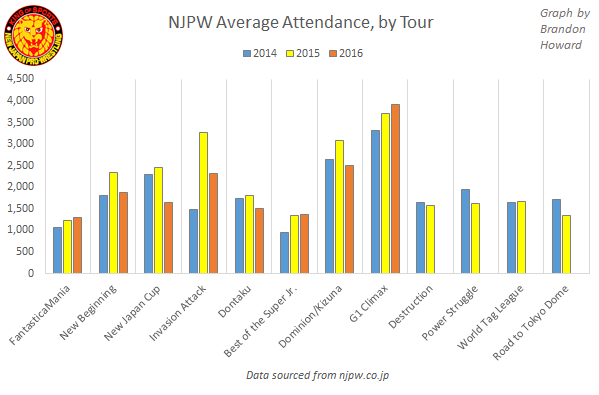 It’ll be interesting to see how 2016 continues to stack up to 2015 and 2014 as the year goes on. Was the G1 at all a turning point? Did the recently-finished tournament really elevate Omega to the point where he means more for New Japan’s business?

While Ibushi was an important star and a draw for the company, his dual contract with DDT and New Japan in recent years only had him working TV tapings for New Japan, and never the untelevised house shows that made up the bulk of most tours.

With the exits of Nakamura, Ibushi and Styles, and the aging of 39-year-old superstar Tanahashi, New Japan needs to be in a rebuilding phase -- and it is. The repackaging of Tetsuya Naito (34) and his trading of the IWGP Heavyweight Title with Okada (28) established the leader of Los Ingobernables de Japon as a new bona fide main eventer. Omega (32) immediately took the older Styles’ (39) place as the leader of the Bullet Club, and went on to win the G1 Climax with star-making performances on the last two nights at the Sumo Hall.

The company also brought in SANADA (28), a promising young wrestler who’d been floating around in promotions like Big Japan, WRESTLE-1 and TNA. Michael Elgin’s (29) career was reborn in his New Japan debut at last year’s G1, and has since been permanently added as a regular. Will Ospreay (23) showed arguably the most untapped potential of any wrestler in the world in 2015, so New Japan signed him; he was quickly established as a star by winning the Best of the Super Juniors tournament.

Still in the background are two of the best wrestlers in the world: Katsuyori Shibata (36) and Tomohiro Ishii (40).

Adding to that is perhaps the most fundamentally sound crop of young lions the company has ever had in David Finlay (23) and the three currently on excursion: Yohei Komatsu (28), Sho Tanaka (26) and Jay White (23).

The loss of three big stars could’ve been devastating to the company. Attendance has suffered somewhat, but New Japan has proactively put itself in a position to turn that around. Rather than relying on nostalgia, or looking to older stars like Tanahashi to carry an even heavier load, the promotion responded by adding new wrestlers with superstar potential, and elevated talented performers it already had who were ready to step up.

The big question is whether New Japan can hang on to these wrestlers going forward, and withstand future competition from WWE for its talent.

Thanks to Evan Speciner of /r/NJPW for compiling New Japan attendance figures 2012-2015.