WWE’s third quarter continued a somewhat startling trend this year when it comes to the financials.

Despite WWE’s SmackDown show moving to FOX with a five-year broadcast deal worth more than a billion dollars, the company’s financial report showed at least some signs of trouble on multiple levels. Merchandise sales are down, live events have not shown an improvement in attendance and WWE Network subscriptions fell below the company’s expectations.

Yet, the company’s focus, at least based on what was said in the earnings report and ensuing conference call, is continuing its brand expansion throughout the globe. With no Vince McMahon present due to being in Riyadh, Saudi Arabia for WWE Crown Jewel, George Barrios and Michelle Wilson handled the Q&A portion of the call. McMahon did leave a comment based on WWE’s mission to continue its global reach thanks to its revamped U.S. television deals.

"During the quarter, we remained focused on expanding the reach of WWE’s brand with the successful debut of Friday Night SmackDown on Fox Broadcast and NXT on USA Network. With our flagship programming now spanning both broadcast and cable throughout the week in the U.S. and our expanding roster of international distribution partners, we remain excited about our ability to deepen the engagement with our fans around the world," McMahon said.

While social media numbers and some metrics showcasing fan and consumer engagement with the product has shown a slight increase, it's obvious the company is looking towards 2020 and beyond with multiple media deals starting to kick in and even more deals being worked on at this time.

On the earnings call, Barrios commented on the lack of a television deal in the MENA (Middle East and North Africa) region being completed in a timely manner playing a significant role in WWE's financials being down for this quarter. Even today, during the earnings call, Barrios admitted that he's not entirely sure when a deal would be completed. The same could be said in regards to negotiations regarding a television deal with India.

The uncertainty of when a deal can be reached was attributed by WWE as the reason it adjusted its previous adjusted OIBDA projections for 2019 from $200 million to somewhere in the $180-$190 million. Despite this, an adjusted OIBDA in that range would still be an all-time company record.

As for what these international media deals can do for WWE, Barrios likened the potential to that of the NBA's lucrative deal with China. Although the relationship between both sides is rocky at best at this present time, the NBA has benefited greatly from doing business with China for years.

"We think beyond 2025, especially in some of these international markets, some of these opportunities will take time to develop. But I’d like to say they’re not public, so it’s hard to track. When you look at the NBA’s success in China, that happened over 25 years of investment. And my guess is some of those early years, there were losses. But I guess they’re happy with the relative performance of that business over time. So I think for us, we’re trying to think across those time frames, But clearly, we’re also focused on the ’19 and 20 as well. It’s not just the long term. We’re trying to make the right tradeoffs,” Barrios said.

One interesting note that Barrios revealed during the call was that WWE essentially dipped into the money it had for 2020 and accelerated investments, potentially in their talent, but Barrios did not go into those specifics. WWE's Crown Jewel did see the participation of undefeated heavyweight boxer and former WBA, WBO and IBF champion Tyson Fury and former UFC heavyweight champion Cain Velasquez. The exact details of how much they are getting paid aren't known, but with Fury, it had been previously reported that he could be making as much as $15 million for his match against Braun Strowman. That number is highly unlikely. When asked about Fury's WWE pay, WWE Executive Vice President of Talent, Live Events and Creative Paul "Triple H" Levesque neither confirmed nor denied that figure.

When it comes to the fourth quarter, WWE said it expects to have a huge last three months of 2019 due to the U.S. television deals coming into effect at the start of the year. Overall revenue was $186.3 million as compared to $188.4 million from the prior year. The slight dip in revenue came from decreased live event ticket and merchandise sales.

Operating Income decreased to $6.4 million from $18.1 million in the prior year quarter, reflecting the decline in revenue and increases in fixed costs, including the impact of certain strategic investments, which were partially offset by a year-over-year reduction in accrued management incentive compensation. Expect better revenue figures starting next quarter with the FOX deal kicking in and the potential for international media deals being completed in the coming months.

WWE had projected a notable drop in Network subscriptions for the third quarter, but even the company didn't realize how big the subscription drop was going to be. WWE announced that the streaming platform has 1.511 paid subscribers, down nine percent from the second quarter at 1.688 paid subscribers.

Originally, WWE projected an 8 percent decline for this quarter, with average paid subscribers at 1.53 million (down from 1.664 million in Q3 2018).

WWE focused on the revamped WWE Network interface, referencing past reviews once the new-look Network was unveiled. Barrios was also asked about any potential changes to the pricing of a subscription and more so talked about the value a subscription has.

As far as the long-rumored premium and free tiers being introduced, Barrios didn’t comment on a specific timeframe, but did say he’s excited for the future of the Network.

“We anticipate increasing [hours of live in-ring content] in 2020 so we think that there’s an added benefit [to having a WWE Network subscription]... We still feel great about the value. As we move forward, our ability to create tiers, premium tiers that we think will bring in additional value will make our content more available to more people. Eventually, for the first time ever, you’ll be able to see WWE on the big screen without having to rely on a paying because that free tier will be available on the connected devices. We think he localization of our content will be, over time, a big deal,” Barrios said. For next quarter, WWE predicts Network subscriptions to continue dropping to 1.43 million, down more than 10 percent from the 1.585 million subscriptions last year's fourth quarter had.

As far as ticket sales are concerned, North American ticket sales declined $4.1 million during the quarter, primarily due to lower attendance and the staging of 19 fewer events. Were it not for the average ticket price being increased 6 percent to $56.64, the company stood to lose even more money in North American live events.

International live event revenue of $2.3 million was essentially unchanged from the prior year quarter as the staging of three additional events was offset by reductions in the average ticket price and average attendance. Merchandising sales has also gone down to go along with the reduced number of live events this quarter. When it comes to merchandise being sold at events, the company only generated $3.5 million in sales, down 19 percent from the $4.3 million from this time last year. The same can be said about its online sales (labeled under "eCommerce") as online orders did $5.7 million in revenue, down 16 percent from last year at $6.8 million.

WWE 2K20, the company's licensed video game, has been under a lot of fire due to the severe backlash on social media. This resulted in video game sales being down and thus, licensing revenues have gone down eight percent this quarter ($7.8 million) compared to 2018's third quarter ($8.5 million). 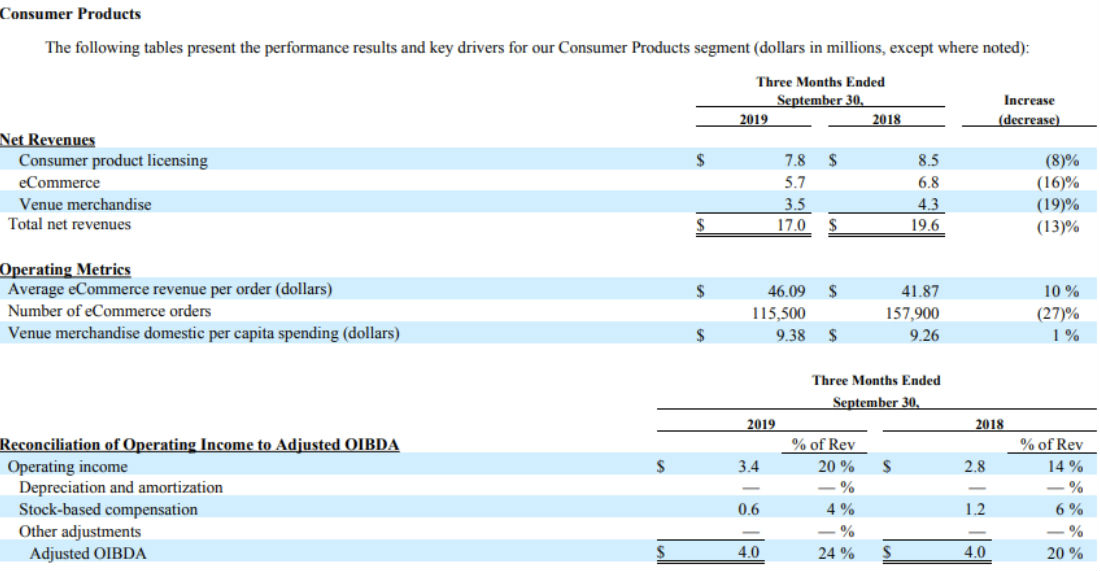 Something that has been a hot topic in professional wrestling as of late is the television viewership and ratings for various wrestling shows. Though the big focus on that is the viewership ratings war between AEW and NXT every Wednesday, SmackDown's viewership, especially since its move to FOX in early October.

WWE's two flagships, Raw and SmackDown continued its run of declining viewership year-to-year. Based on numbers from Showbuzz Daily, over on the Raw side, the show averaged 2.476 million viewers in the third quarter per broadcast, down 11 percent from last year's third quarter. It should be noted that the viewership for Raw did see a slight increase from the second quarter.

SmackDown had a similar story with its viewership this quarter. It performed better this quarter (2.06 million) than the second quarter (2 million) but it suffered a 10 percent drop from last year's third quarter (2.319 million) viewers.

It should be noted that, even though WWE noted the SmackDown premiere episode on FOX averaged nearly four million viewers, the show's episodes on FOX and FS1 were not included in the third quarter. What will be interesting is not just how the next couple of months will look viewership-wise for SmackDown and whether or not decides to throw away the 888,000 viewers the October 25 episode did since it aired on FOX and not FS1.

A common topic in WWE's earnings reports are the increase in social media consumption and this quarter was no different. In regards to AVOD (ad-supported video on demand), the company saw an increase in hours viewed with 333 millions hours consumed, which is an increase from last quarter, which had 324 million hours viewed, but remained the same when compared to last year's third quarter. Aside from any subtle references WWE has done towards AEW in recent months on WWE programming, the company has largely stayed away from giving its competing promotion any attention whatsoever. That didn't change in the call as Barrios pretty much danced around the question of whether or not AEW has affected WWE's way of thinking when it came to approaching talent, instead touting the company's massive global reach.

"I don't really want to get into the external perspective that may influence it. Historically, as the company has done better, our talent has done better and we think that's part of the win-win virtuous cycle. As far as individual talents making choices, everyone has a decision to make. I will say that we have the most sizable wrestling platform by order in magnitude," Barrios said.