Here's your Fight Size wrestling Update for the evening of April 1st, 2018.

- Current SmackDown Live talent Mojo Rawley was said to have lied to a few people about giving them complementary tickets to a future WWE show. Mojo was reportedly given free access to a gym and promised the staff members tickets to a WWE event for letting him use their facility for free. The staff showed up the event and discovered that there were no tickets waiting for them at will call. Said user then took to Facebook to share his disappointment in Mojo Rawley. 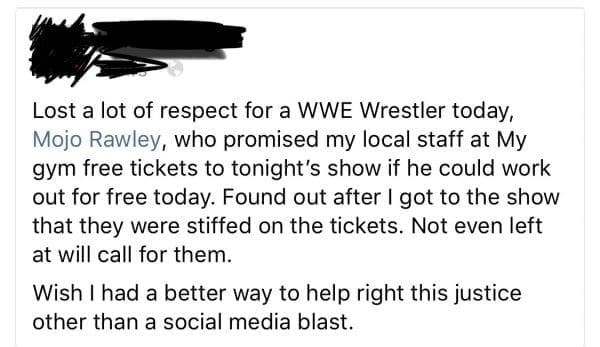 - A Twitter user asked former 8-time WWE Champion Dwayne "The Rock" Johnson why he would wear wrestling boots with the calves open. Johnson would then share the story behind his signature wrestling boots.

The open calf wrestling boot was an idea for OG wrestler named George Wells. He gave my pops an old pair of his boots in the 80’s. They were in storage and my pops never wore em. I found em and thought it was a dope idea. Plus luckily I have big calves to fill them out ------

- Ahead of his WWE Cruiserweight Championship match at WrestleMania 34, Mustafa Ali continues to release some great self-produced promo videos. To the view the latest one, head over to WWE's YouTube channel.

- The 'Bullet Club' continues to up the ante when it comes to their brand. Matt Jackson of the Young Bucks recently revealed a new t-shirt design that will be available at Hot Topic soon.

Like we’re already not busy enough, we decided to start a new band! Check out our new merch! https://t.co/fPt0jMdIJr #SweetForYou pic.twitter.com/PZkO3XcFWK

- Tommaso Ciampa continues to antagonize the man who he will go one-on-one with at NXT TakeOver: New Orleans next Saturday. This morning, Ciampa wished Johnny Gargano's wife Candice LeRae a not-so-nice "Happy Easter".

Woke up and phone alerted that I had a #WrestleMania answer from The Phenom! My phone’s been doing this for 3 hours now. #AprilFoolsDay Undertaker 1 Cena 0 pic.twitter.com/41yagr1pFm

- Ric Flair continues to live on the level of a pop culture icon as he was hanging with Offset on this Easter Sunday.

Reconnected With My Brother @OffsetYRN At Huncho Day In Lilburn, GA! WOOOOO! pic.twitter.com/kUnmMYSdGp

See Also
Report: Bray Wyatt Has Been Spending The Money He Owes In Child Support On JoJo
Local Canadian Referee Jon Peterson Discusses Why NXT Coming To Barrie, Ontario Means A Lot To Their Wrestling Scene
The Young Bucks Step Up To The Golden Lovers
Becky Lynch: I Would Love To Be Facing Bayley, Kairi, Asuka Or Ember Moon At Money In The Bank
Lance Archer Says He'd Be Very Happy To End His Wrestling Career In Japan