Here's your Fight Size wrestling Update for the morning of September 17th, 2018.

- The 'SAP Center' in San Jose, California will play host to WWE's 'TLC' PPV on December 16th. On the venues website they are advertising a six-man tag team match featuring The Shield taking on Braun Strowman and the current RAW Tag Team Champions Drew McIntyre and Dolph Ziggler.

Tony Khan: It's Us Against Them And I Am The Captain Now

- WWE uploaded a throwback video onto their YouTube channel of when the then-World Heavyweight Champion Triple H came to "comfort" the WWE Hall Of Famer Ric Flair in 2002.

- WWE's Director of Talent Development and Head of Global Recruiting William Regal was present for night one and night two of PWG's Battle Of Los Angeles tournament and Regal recently sent out a tweet thanking the staff and wrestlers of Pro Wrestling Guerilla for welcoming him during his time there.

I’d like to thank every one of the staff and competitors at PWG for their hospitality the last two nights.

- Here's what'll be on tap on the WWE Network this week:

- Monday following Raw, it will be a new episode of “WWE Story Time”.

- “205 Live” is moving to 7 PM Eastern on Wednesday due to Tuesday’s return of ” Mixed Match Challenge”.

“WWE NXT” will be at 8 PM Eastern Wednesday.

Wednesday at 9 PM Eastern, it will be episode three of the 2018 “Mae Young Classic” which will feature the following matches:

- Thursday at 9:50 PM Eastern, it will be the WWE Network debut of the second season of “Mixed Match Challenge” which will feature the following first-round action:

*AJ Styles and Charlotte Flair versus Naomi and Jimmy Uso

*Kevin Owens and Natalya versus Braun Strowman and Alexa Bliss

- Sasha Banks, Kalisto, Kalisto's wife and Oney Lorcan were present at the Wild 'n Out live show over the weekend. 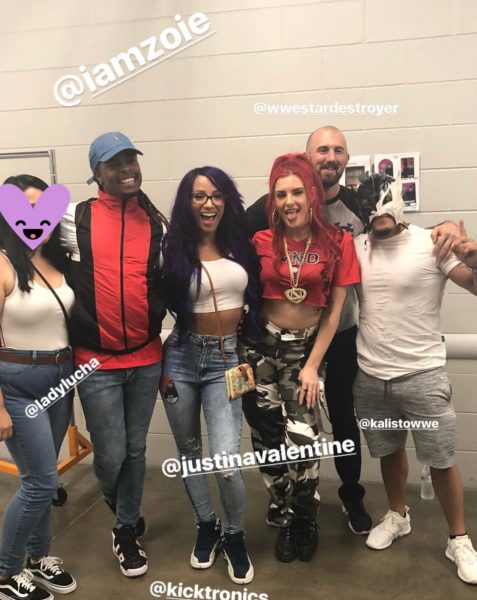 - On October 27th which is the day that Hulk Hogan, Scott Hall and Kevin Nash kick-start their '2 Sweet' tour, the opening for the n.W.o. Q&A session will be a live recording of the '83 Weeks' podcast with Eric Bischoff and host Conrad Thompson.

- 'Prices Chef Inc' were honored to have the RAW Women's Champion Ronda Rousey eat at their restaurant prior to a WWE Live Event in Corpus, Christi over the weekend.