Here's your Fight Size wrestling Update for the morning of October 27th, 2018.

- SmackDown Live star Tye Dillinger sent out a series of tweets two days ago about not being in the ring and then he quoted the tweet of Matt Jackson of The Young Bucks and agreed with Matt that money isn't everything but Tye soon deleted the tweet.

The Rock Is Proud Of Bobby Lashley For Representing, MVP Educates Fans On Representation

#TBT To that time I used to wrestle. pic.twitter.com/XTVpHI1nWm 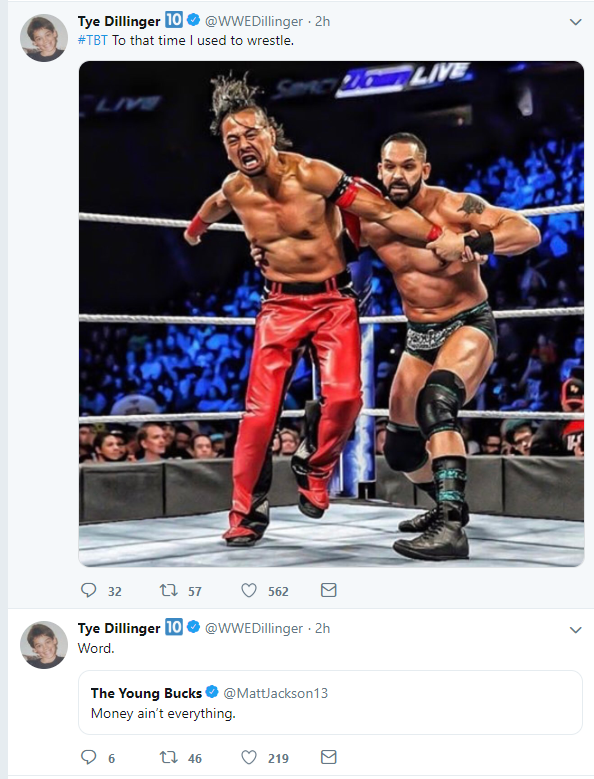 - Despite all of the political news surrounding WWE and Saudi Arabia at the moment, Knoxville Mayor Glenn "Kane'" Jacobs is still performing at WWE 'Crown Jewel' on November 2nd and that was backed up by Jacobs' spokesperson Rob Link.

"Mayor Jacobs is still going to the Crown Jewel event because he made a commitment to not only the WWE, but the Knoxville Public Safety Foundation and the first responders of Knoxville and Knox County," said the mayor's spokesperson Rob Link to 'Knox News'.

- WWE has uplaoded the full NXT Women's Championship match to their YouTube channel between Bayley and Nia Jax from NXT TakeOver: London.

So this explains all this insta-Thot Photos -------- CONGRATULATIONS BRO!! I’m super Proud of you my friend. Keep doing Great Things. @KalistoWWE https://t.co/mvMBvGEBUM

- Maria Kanellis showed off her transformation off as she is set to compete in the WWE 'Evolution' Battle Royal. You can view Maria's trasnformation by heading over to her Instagram page.

- A video was put together on WWE 2K19 that featured Brock Lesnar and Paul Heyman doing the IIconics' entrance.

- Here's some of the content on the 'Shawn Michaels: Showstopper' DVD:

'House Hardy' is premiering on the WWE Network this Sunday following 'Evolution'. Below is a preview video for the show: