Fight Size Update: The Young Bucks & Cody Continue To Tease The Location Of 'All In' 2, Velveteen Dream-Ricochet, Kenny Omega-Okada, More

Here's your Fight Size wrestling Update for the evening of June 3rd, 2018.

- During last night's ROH 'NYC Excellence' show, prior to his match with 'Titan' "The American Nightmare" Cody teased the New York City crowd that was inside of the Hammerstein Ballroom telling them that New York City was going to be the host of 'All In' 2. The crowd went ballistic once they heard the announcement but Cody soon lowered the volume in the building once he told them that he was just joking. Following the show The Young Bucks and Adam "Hangman" Page made their way to the ring and Matt Jackson seriously hinted at a location in New York City that could possibly host 'All In' 2.

- While John Cena was the focus of a Q&A session for fans at 'MegaCon' in Orlando, he was asked about some of the current stars in NXT and he name-dropped one in particular who he gave some praises to and mentioned that he would like to wrestle this star and the individual he named was "The Vainglorious One" the Velveteen Dream. The Dream caught wind of John Cena's comments and made it clear that they can make it happen at any time. Velveteen Dream has since deleted his response for an unknown reason.

- In honor of AJ Styles' birthday WWE posted a 50-picture-photo gallery of unseen photos of "The Phenomenal One". The thumbnail of that gallery saw a photo of AJ Styles alongside Samoa Joe, Christopher Daniels, and Frankie Kazarian. 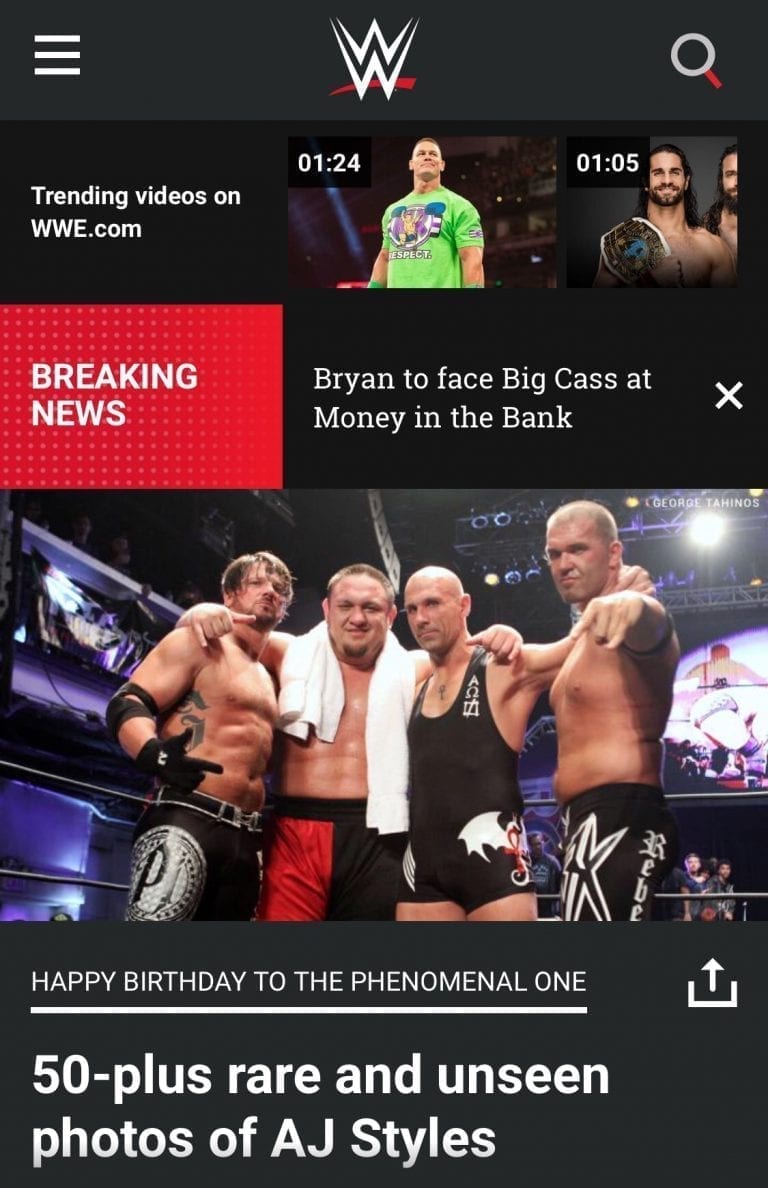 - WWE Hall Of Famer Beth Phoenix shared on social media that she was pranked by her husband, "The Rated-R Superstar" Edge.

Just found this at the base of our toilet seconds before @EdgeRatedR threw it at me. (It’s dead but STILL.) Now I must concoct something vile to give him nightmares for all of eternity. pic.twitter.com/87CjIiwhDT

- John Hennigan and Taya Valkyrie officially got married yesterday and they shared photos of their beautiful ceremony, and themselves along with their friends on their personal social media accounts.

Okada is fishing meanwhile @KennyOmegamanX is working out.. There is know way Okada is retaining.

You’d think the most frustrating part would be that I have to work this hard just to even approach his level. But actually, I don’t mind. Natural ability stopped working for me once I left Winnipeg. I’m used to this. https://t.co/QzayVI547E

#WWENXT Superstar @DakotaKai_WWE talks @QoSBaszler, the influence of @TheRock, and how she came to realize her dreams of sports-entertainment. https://t.co/slZsMJfLYA

Very cool and flattering @DakotaKai_WWE. Thank you! Look forward to following your career. Work extremely hard, have FUN in the ring performing for the fans and always stay above bullshit backstage politics ---------- https://t.co/OI4PTiW20I

- The Velveteen Dream continued to taunt his opponent at NXT TakeOver: Chicago II, Ricochet. Dream recently took to Twitter to remind Ricochet of the "pay" he used to receive prior to emerging into the WWE world.

But The DREAM
will make sure U get that
Hot Dog and Handshake
UR used 2 after the match.....#IndyPay pic.twitter.com/opfH82Z6IR

Ricochet had his own sly comeback for the Velveteen Dream that had to do with Dream being cut from his 'Tough Enough' season.

The result will be the same at Takeover Chicago. #ELIMINATED pic.twitter.com/WXUQEVUYW9