Get Up for SmackDown 11/15: Get Ready to Get Frisked

Get Up for SmackDown

In this column, I'll touch on the most important stuff from last week
and preview what's on tap for tonight.

The ref in the Becky Lynch vs Alexa Bliss championship match was borderline incompetent, not seeing Bliss's foot on the ropes as she was tapping out.

Why was Bliss tapping, instead of just waiting for the ref to grow a pair of eyes? Well, this might have been a reason:

Pretty sure your arm's not supposed to bend that way.

Now, Alexa is pissed, and she has every right to be.

This feud will continue after Survivor Series, all the way to TLC, and I hope we get to see the first ever Women's Ladder Match. Twisted Bliss from the top of a ladder? Count me in.

Also, James Ellsworth is Team SmackDown's Survivor Series Mascot, and Shane-O Mac is the new 5th Member of Team Smackdown, replacing the "injured" Baron Corbin, taken out by a returning and vengeful Kalisto, who is fighting (The) Brian Kendrick for the Cruiserweight belt at Survivor Series and if he wins, the title and the entire CW division come to Tuesdays. Oh, and Miz and Dolph are going to have an Intercontinental Championship match tonight to see who faces Sami Zayn at Survivor Series, but we'll talk more about that later.

So a lot of stuff happened last week, most of it quite important, but it pales in comparison to the really big development:

BREEZANGO DID THEIR NEW FASHION POLICE GIMMICK FOR THE FIRST TIME ON SMACKDOWN.

Are you confused? Don't be. Click over to the next page for a complete backstory on this brilliance.

They told this story in little episodic backstage videos, like one of those old serials you'd watch before the picture show at the cinema back in the 30s.

It's some of the best long form story-telling that the WWE has done in a while.

It all began back on October 11. Breeze is walking through the halls of the arena, thinking he's talking to Fandango, when he realizes he's actually all alone:

So Tyler Breeze believes that Fandango has been kidnapped or something, ropes off a section of the hallway with Crime Scene Do Not Cross tape, which was just lying around the backstage area, mind you, and vows to get to the bottom of this.

When we next see Breeze, he's wearing a Police uniform, investigating the disappearance, having taped himself into a web of Caution.

The unbridled joy with which Breeze greets his non-kidnapped friend is just wonderful. But npw Fandango, having walked into the scene munching on an apple for no reason whatsoever, gets an idea, sparked by Tyler's costume. We'll have to see where this goes.

And where it goes is to AWESOME TOWN.

THEY ARE THE FASHION POLICE.

They can't figure out how to do "Good Cop/Bad Cop" but that's fine because it doesn't matter, and also because it's HILARIOUS.

Breeze and Dango are fantastic together, with great chemistry between them, and they can really go in the ring.

And now, they're babyfaces. They beat the heel Vaudevillains to get on the Survivor Series team, and the Smackdown writers perfectly utilized an old heel announcer trope.

Watch this next video: JBL puts them (and their gimmick) over as they walk down to the ring. He laughs at the idea of Breezango passing out tickets to fashion offenders, until they give him one, then he flips immediately to heel on them. Which makes them babyfaces.

It's great, and God Bless JBL for knocking it out of the park.
(Wow. Honestly can't believe I just praised JBL for something.
It really is a brave new world.)

They appeared that night on Talking Smack, where they handed out tickets to both Daniel Bryan and Renee Young, and they did it in full cop uniform:

Renee Young asked them how they felt about beating The V'Villains to earn a spot on Smackdown Live's Survivor Series team, and Breeze answered "Duh. Ever heard of it? ... Have you heard of Duh?"

They even have Tumblr fan-fic art dedicated to them:

I mean, I might have drawn that myself, if I had any talent.

These two have made me question my own sexuality,
and I'm married with a child on the way.

WHAT ARE THESE FEELINGS?

Anyway, I'm sure it's only a phase I'm going through.

These two are national treasures is what I'm saying, and they should be treated as such.

Neither one of those things is going to happen, but a guy can dream, can't he?

And now for a preview of Tonight's Episode of Smackdown Live:

*What will happen when The Deadman comes home?

He's going to Chokeslam Viktor and Tombstone Konnor of course.

They might add him to Survivor Series somehow, or tease a match at the Rumble or Mania, but he's definitely going to wreck The Ascension.

One of the two.

I mean, what would the fun be in that?

Also, can we talk about how sad Edge looks? 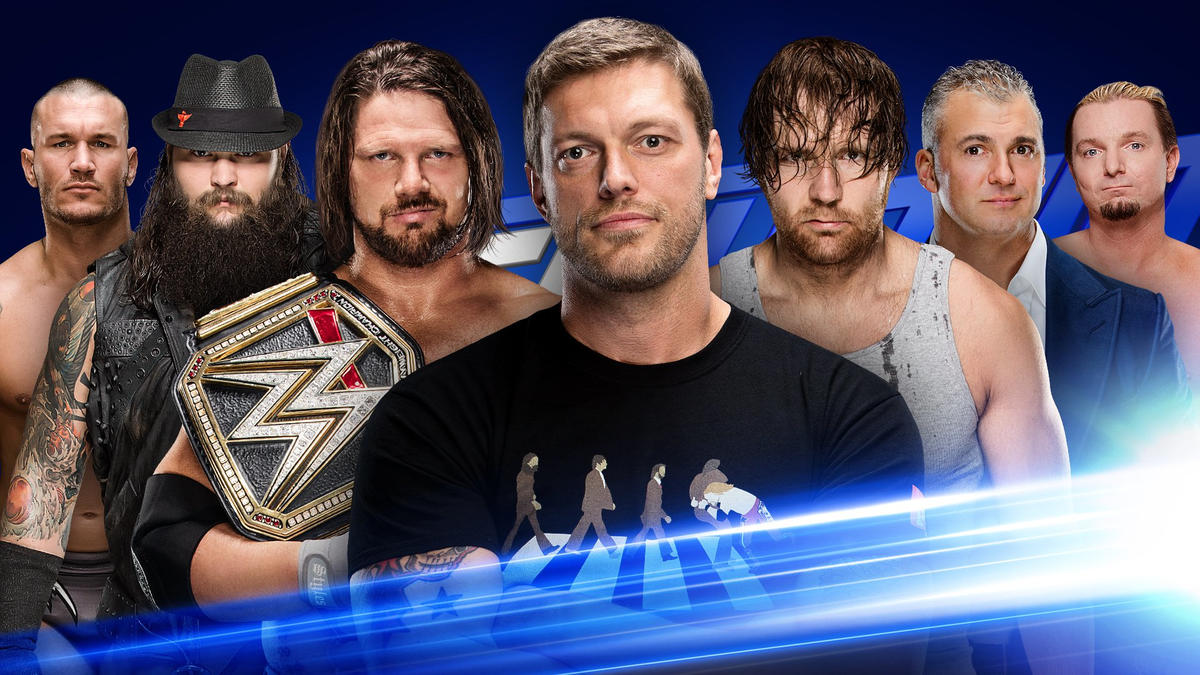 *Will The A-Lister take back the Intercontinental Title?

Here's the thing. I think he does. But he cheats to do it, because he's the Miz. Maryse gets involved, distracts the ref or whatever, Miz wins with a low blow and The Skull Crushing Finale.

So then Daniel Bryan makes the match for Survivor Series into a triple threat: Miz vs Dolph vs Sami Zayn.

Miz has been doing such high quality work these past few months, you can't leave him off the Survivor Series card. You just can't.

And how is that different from the Raw Women's Team, exactly?

"Bitches be catfightin', am I right, fellas?" This is the WWE approach to women, always has been, and will continue to be, until Vince dies.

But sure, show me Carmella attacking Nikki Bella again. Maybe it'll be interesting this time, who knows?

Anything is possible, I suppose.

Now this seems like a stupid, meaningless question, until you see what they're teasing:

"Considering how intense the competition currently is among Team Blue’s tandems, will they be able to survive long enough to compete on the one night of the year when Raw and SmackDown LIVE are pitted against one another for brand supremacy?"

So they're going to make all of the Tag Teams fight each other tonight, I guess.

Dammit, Smackdown, I thought you were supposed to be the smart one.

Including our Live Viewing Party

Until Next Time, I've Been Alex Pawlowski
and this was me when Breezango became Stripper Cops.