Hulk is teasing a major announcement.

On July 15th WWE announced that Hulk Hogan was going to be reinstated into their Hall Of Fame after being blacklisted from the company for the racially charge comments and remarks that he made which were recorded and released to the public. WWE decided not to make any mention of Hogan on WWE programming or in any of their promotional work for three years. Hogan is now back as a member of the company and it has been discussed by wrestlers currently within WWE that Hogan spoke to the roster backstage at the 'Extreme Rules' PPV which was on the day he was reinstated.

Since the announcement of Hogan's reinstatement, fans of the sport have wondered if Hulk Hogan will make a return to WWE TV. Also, Hogan's former running-mates in the nWo--Scott Hall and Kevin Nash were present at Hogan's beach shop in Orlando recently and Hogan was sporting his black beard from his early 2000's run in the WWE with Nash and Hall. 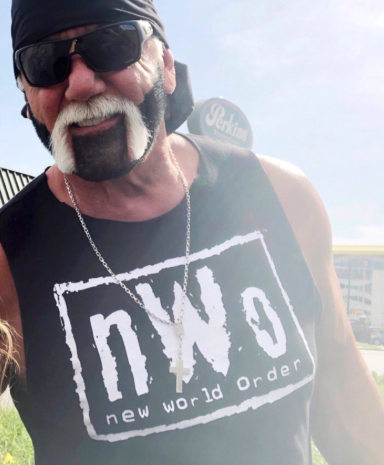 Yesterday, Hogan added more fuel to the rumor flames when he spoke to his fans at the National Sports Collectors Convention in Cleveland and shared that he will be making a huge announcement on October 27th.

October 27th is one day before WWE's first-ever all-women's PPV 'Evolution'. To read the official press release about that PPV, click here.