The Hurricane On The Crowd Reaction He Received In The Mens 'Royal Rumble' Match: "That Reaction Kind Of Caught Me Off Guard

The last-true superhero in professional wrestling was overwhelmed by the reaction he received upon entering the mens 'Royal Rumble' match.

Former two-time WWE Cruiserweight Champion, Gregory Helms, or better known as 'The Hurricane' returned at the 2018 'Royal Rumble' PPV, where he made an appearance in the Royal Rumble match. Helms spoke with Sporting News recently and discussed the tremendous welcome he received from the WWE Universe that shocked him. Helms also stated that if he was going to be eliminated quickly, there wouldn't have been another choice other than the man who did so, John Cena.

“That reaction kind of caught me off guard. I had never worn that cape in WWE, that cape is kind of inspired by Randy Savage. I have it hooked to my wrist so that I have a full wing span. I planned to spin around in a full circle and let everybody see the whole cape and everything, but I couldn’t hear my music anymore. I heard ‘Stand back' and the crowd was so loud that I couldn’t hear my music, I thought they cut it off. In my mind, if they cut it off, that means I have to get my a** in the ring, so that’s why I cut my entrance short.”

As soon as Helms entered the Rumble, he immediately came face-to-face with former 16-time WWE World Champion, John Cena. Helms stated that the spot with Cena was his idea and it was a callback to a similar moment from the 2002 'Royal Rumble' match, when The Hurricane drew a great number at a horrible time; as he had to step into the ring with Stone Cold Steve Austin and Triple H.

“If I was going to duplicate that spot, it wouldn’t have worked with anybody else, it had to be him" Helms said. “He had some reservations about throwing me out. John Cena is still a babyface regardless of how people react to him, so he had some reservations about throwing out the superhero. But talking to him, I said my character thinks he’s King Kong, so he’s going after Godzilla.Then he shook his head and grinned. He was so gracious and went along with it. If he says no, there’s nothing I can do, so I give a lot of credit and respect to John.”

The former World Tag-Team Champion stated the when he was seen backstage, he was immediately rushed to and shown tons of love.

“Once we were inside the building, the whole roster just ran up to me with open arms. So many people were glad to see me. So many old friends, so many new talents that I’d never met but who were Hurricane fans. It was really cool to get that respect from the newer guys. Sometimes it seems like there’s a rift between the old school and the new and I’ve always been a bridge between the old school and the new. It means a lot to me that I still get that respect from both sides.”

One of the more memorable moments of Hurricane's night did not come in the Rumble match, but came in the form of having the chance to speak with Roman Reigns. Reigns is the younger brother of Matthew Anoa'i, who went under the name "Rosey" in the WWE. Sadly, Anoa'i passed away in April of 2017 due to heart failure. Helms and Rosey were former Tag-Team Champions together in the WWE and to be able to have that moment captured with Reigns meant a lot to Helms, more than we as fans could ever understand.

"He does favor Rosey a lot. Anytime I see him I’m always going to think of Rosey. He was a person I cared about a lot and was really saddened by his passing. I didn’t even see the photographer there, they captured that really good moment and I just have to thank them for that.” 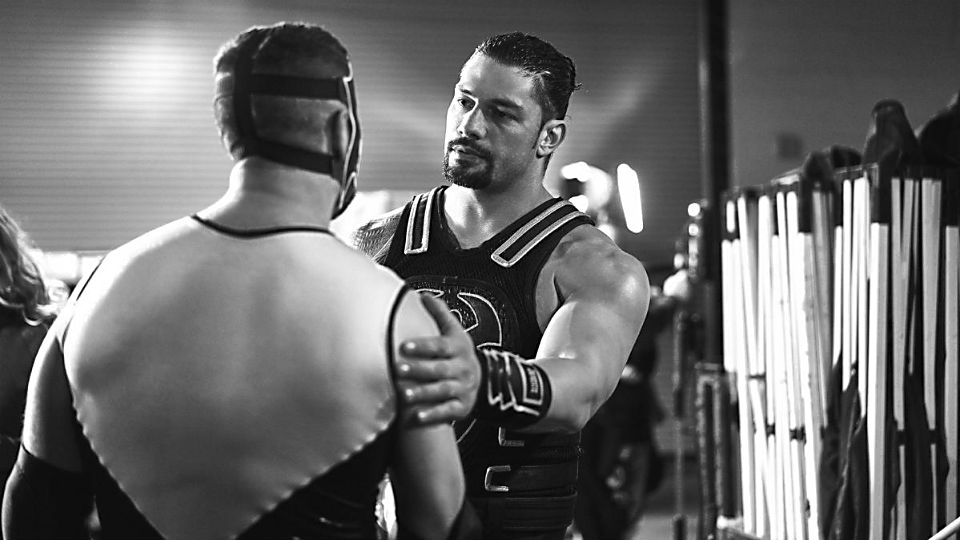