Jerry Lawler Defends His Praise Of Donald Trump's CNN Tweet: "Everyone Just Needs To Lighten Up"

In case you were too busy eating hot dogs and shooting off small explosives over the weekend to notice, Donald Trump sent out a Tweet where he beat up a guy with the CNN logo Photoshopped over his face. The guy in real life was Vince McMahon and the footage was from WrestleMania 23.

And here is a Tweet from Jerry "The King" Lawler talking about how awesome Trump's Tweet was. 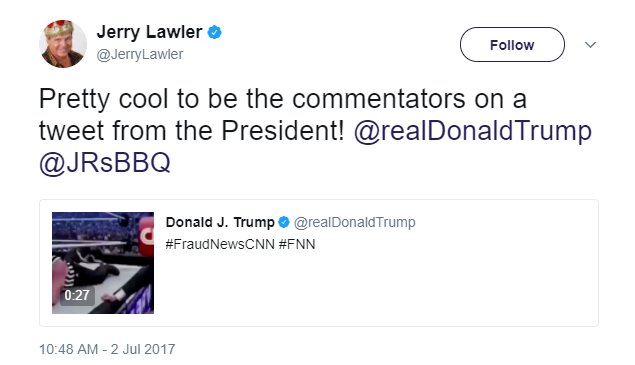 Considering how divided our nation is politically right now, Lawler might have expected a pretty big backlash from half the county. But as he said yesterday on his podcast, "Dinner With The King", it wasn't that bad.

“Not as much negative reaction as I thought I was going to get. To me, it was pretty cool, no matter who the President is. It’s the President of the United States and they put out a Tweet and you’re in it. I mean, c’mon! There’s not many people that can say that happened to them, so I just thought it was cool.

Everyone just needs to lighten up. That was a funny Tweet. You gotta admit, whether you like Donald Trump or whatever, it was the President of the United States putting out a funny Tweet. Lighten up. What is wrong with that?”

You can listen to the entire podcast at this link or in the video at the top of the page.