BECAUSE HE GOT WEIRDLY SPECIFIC LAST NIGHT ON TWITTER

As we discussed earlier, Daniel Bryan Live-Tweeted the Total Bellas episode last night, which focused on John Cena and Nikki Bella teaming up for their feud against Miz & Maryse. So when Bryan Tweeted the following, it was especially poignant.

But of course, that's not possible, since Daniel Bryan was forced to retire from WWE when the company's doctors refused to clear him. He now serves as SmackDown's General Manager.

And the WWE won't even let him take a bump in his wife's training video without censoring it.

But if there's one thing that we learned when he was co-hosting the now-defunct post-SmackDown shoot-fest "Talking Smack," it was that he doesn't give a flying FUUUUUUUUUUUUUUUUDGE what he says. What are they going to do, fire him?

"Great," he would say in that case, "I'm just going to go to Japan and start my career back up over there."

Because Daniel Bryan has said he has doctor's notes that prove he should be cleared to wrestle, and he believes he would be cleared in New Japan Pro Wrestling, and he even gave a vague contract expiration date during an episode of Talking Smack back on March 7.

A year and a half.

That comment caused rampant speculation (I wrote about it here) and even caused me to create a countdown clock which now sits at approximately 351 days.

So when you look at Daniel Bryan's Tweets from last night, starting with this one: 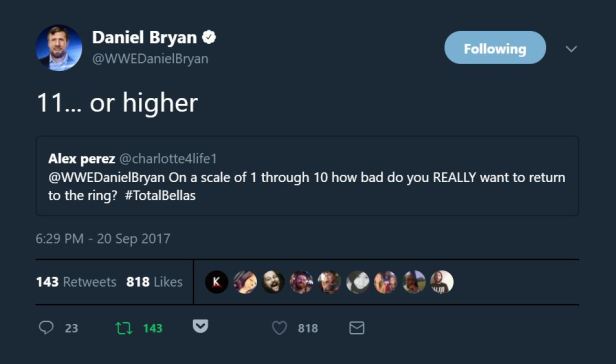 ... you can see that he's really serious about coming back to wrestle, regardless of whether it's for WWE or not.

So let's assume he is leaving WWE in 351 days, and let's use his Tweets from last night to book his career after he leaves. 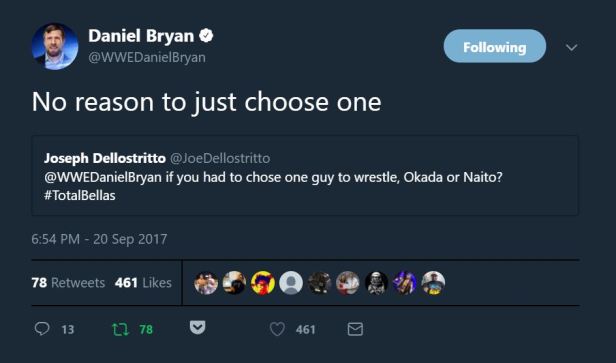 2. He also wants "tap out" the ENTIRE Bullet Club. 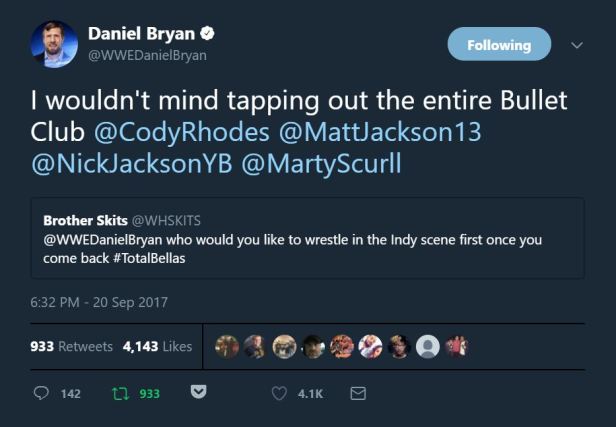 And at least one of them noticed.

So THAT would be fun.

The Young Bucks responded with a picture of Dave Meltzer, so I think that means they accept Bryan's challenge?

But also, there was at least one Bullet Club member that Bryan DIDN'T tag who wants a piece of the American Dragon.

@WWEDanielBryan the entire Bullet Club --, you sure you want that?

3. We already know that Daniel Bryan wants to face Cody Rhodes for the ROH Championship.

The Prince just became a King

...and we march on everybody pic.twitter.com/p0XpRBH8oM

Congratulations! Being @ringofhonor champ for 462 days transformed me as a wrestler and was one of the best times in my career. Enjoy it! https://t.co/alSLGCeNcX

Side note, if you hold the @ringofhonor title 462 days I may have to come after you, which would be 9/28/18. Be forewarned! #FinalCountdown https://t.co/alSLGCeNcX

So we know what Bryan will be doing late next September.

4. He wants a shot at Kenny Omega, preferably somewhere like the Tokyo Dome. 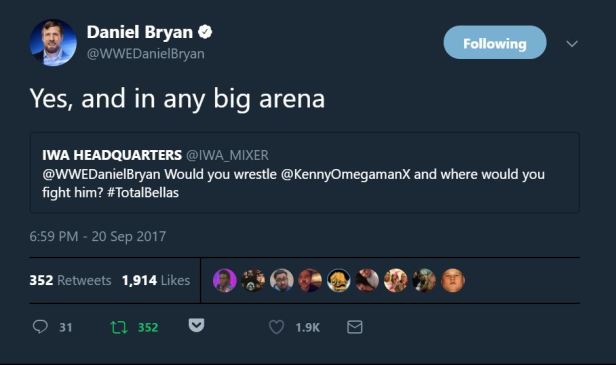 We've got unfinished business, you and I... -- Even in Japan, the people still shout. I can never go out... pic.twitter.com/nKETpTiR8V

Now, there's always a chance that he could wrestle in Mexico, but without his formerly-trademarked long tresses, it wouldn't be as fun. 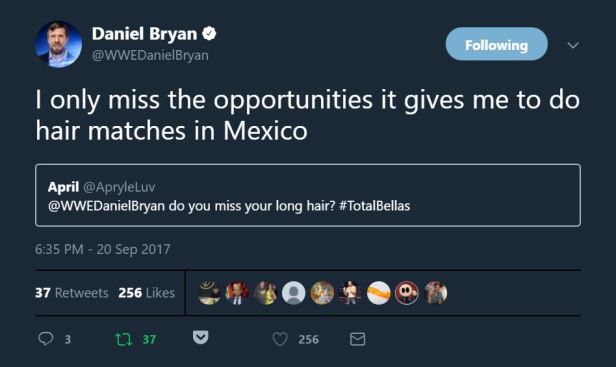 So it's definitely New Japan for Daniel Bryan, starting in 351 days.

Unless he gets the news--from a doctor not in the employ of WWE--that returning to wrestling would be too dangerous.

In which case, he'd quit and never go back. Because now there's something more important to care about. 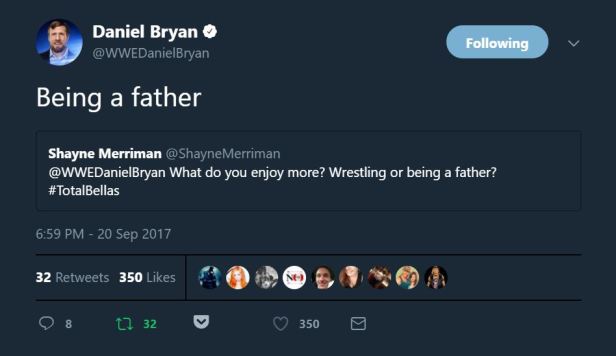