Scott Dawson and Dash Wilder like to use the "no flips, just fists" motto to describe their NXT tag team, The Revival. "No tweets" might need to be added to the motto, after Dawson criticized the Tag Team Turmoil match that aired on Smackdown this past Tuesday.

Dawson posted a tweet that took a shot at the teams competing in the gauntlet match to crown new No. 1 contenders to the Smackdown Tag Titles. 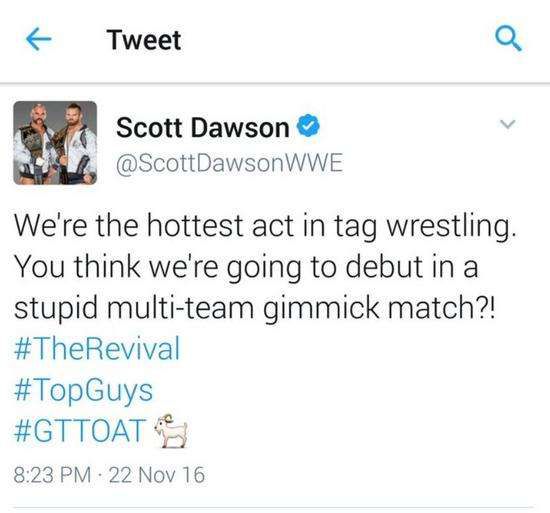 The tweet drew some swift and harsh responses from two former greats in the WWE tag division: Bubba Dudley and Road Dogg.

Bubba tweeted, "Great job. You managed to insult the entire creative team and your FELLOW workers in one tweet. Complete disrespect..."

Road Dogg, who works for WWE as a producer now, posted, "Keep talking like that and you won't debut at all! #OUDK"

Those responses led Dawson to delete that tweet and then apologize, tweeting, "Admittedly my last tweet was stupid. I've worked w/ all those teams & have the utmost respect for them. Stupid tweet to try to rile fans."

Dear @ScottDawsonWWE this is an official apology for ribbing you on social media. I've upset the balance of the "universe" I beg forgiveness

You puppets are SO easy...

That apology tweet also had vanished from Dawson's feed as of Wednesday afternoon, but Dawson appeared to take the whole exchange in stride, issuing this "challenge" to Road Dogg on Wednesday morning:

There is only one way to settle this. Me vs you; Coal miners glove, barb wire rope, hell in a cell, ladder match while the ring is on fire! https://t.co/615h43gcbP

The Tag Team Turmoil match included The Usos, The Hype Bros, The Vaudevillains, Breezango, The Ascension and winners American Alpha. American Alpha won the match, and will face Randy Orton and Bray Wyatt next week on Smackdown to determine which team will challenge Heath Slater and Rhyno for the Smackdown Tag Titles on Dec. 11 at TLC.

Dawson and Wilder have held the NXT Tag Titles on two occasions, making them the only two-time tag champs in NXT history. Their second reign ended Saturday at the NXT Takeover event in Toronto.

Dawson has been under contract to WWE since 2012. He and Wilder teamed together briefly in 2014, then returned to action as a team on a permanent basis in the summer of 2015.