- Above, you can watch Hideo Itami and Oney Lorcan try to slap each other to death.

Chelsea Green Aims To Keep Buzz Up During 90-Day Wait, Wants To Connect With Barstool And Playboy

The match was declared a no-contest when Hideo WOULDN'T STOP MAKING ONEY GO TO SLEEP.

So Kassius Ohno came out to stop it, and a rift widened.

But it's okay, though, because Roddy then OWNED Bobby on Twitter. 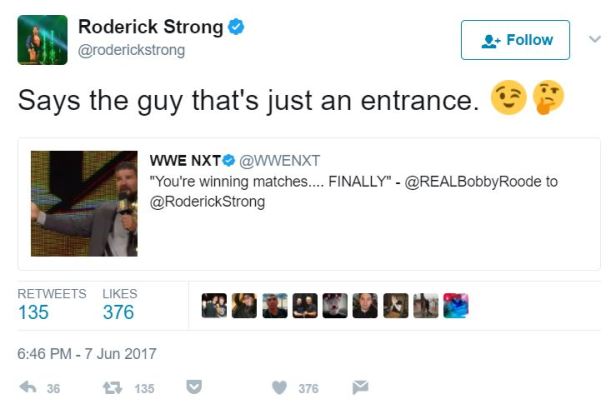 - Killian Dain took care of business against No Way Jose.

While doing so, Dain did his best Finn Balor impression.

- Earlier in the night, Peyton Royce did a perfect Perfect-Plex.

and Andrade Almas seems to have a lady problem.

- Also, Heavy Machinery took on Lars Sullivan and some guy.

Then Heavy Machinery called out Authors of Pain.