Drop down in the comments and join our

On tap for tonight's episode 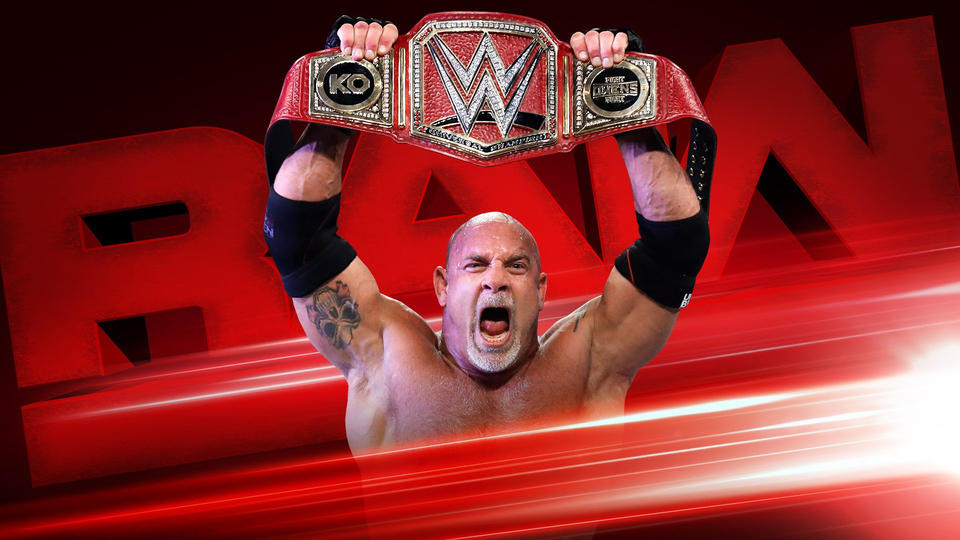 Goldberg Gets To Gloat

Hooray! Won't that be fun! 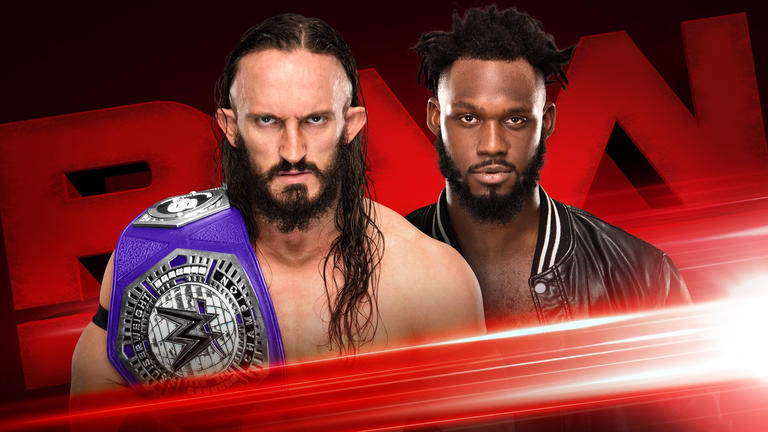 Neville vs Rich Swann
for the Cruiserweight Title

So that should be fun.

No, seriously.
Sorry if that sounded sarcastic.
I'm legit excited for this match.

We start with Chris Jericho coming to the ring.

He says he screwed over Owens, but Owens had it coming, after the Festival of Friendship.

He just wants to know why KO did it.

He demands that Owens come out and tell him why.

KO said that on the night he became champ, Triple H told him he needed to find somebody to have his back.

KO chose Jericho, because he was uniquely qualified and also, totally gullible.

Jericho outlived his usefulness the night he accepted the match against Goldberg on KO's behalf.

So he put Jericho down.

And he knew that he was going to beat Goldberg last night, that he had him outsmarted, except he's man enough to admit that Jericho outsmarted him.

KO says put the US Title on the line.

Then he says how about we fight right now?

He runs to the ring starts fighting with Jericho, AND SAMOA JOE RUNS IN TO HELP KO.

The Fat Guy Faction is an actual thing.

Sami Zayn runs in with a chair to make the save for Jericho, he and Y2J clean house.

Zayn is in control to start, Owens briefly gains the advantage, but Sami Zayn counters a Pop-Up Powerbomb with a dropkick.

Owens rolls to the outside, then Zayn hits a running Tope Con Hiro.

Back to the inside, POP-UP POWERBOMB!

But Owens doesn't make the cover.

He hit a somersault guillotine leg drop, then a package driver to the back of his knee, which looks SICK

then a SECOND Pop-Up Powerbomb.

Then he makes the cover.

If losing to Goldberg brings back murderous Kevin Owens, I'm all for it.

Hey, we are in Chicago, after all.

Swann hits a pretty dropkick, Neville rolls out, then Swann tosses him into the barricade.

And it looks BAD.

The aggressive side of @WWENeville has been QUICK to come out in this #Cruiserweight Championship match! #RAW #205Live pic.twitter.com/SraYJYlzEi

Back from the break and Neville's in control.

Until Swann hits an enzuigiri, and does this to the outside.

On the inside, Swann hits a great Michinoku driver for a two count.

But Neville then meets him on top of the turnbuckles and hits a HUGE superplex.

But Swann smartly rolls all the way out of the ring.

Neville follows him, tosses him into the barricade.

Back from the break and they're trading forearms.

Then Swann pulls this out of his bag of tricks:

He follows that up with a couple HUGE kicks.

Tries for a Phoenix splash, misses, Neville makes the cover.

But then Neville locks in the Butterfly Crossface.

And nobody, but nobody escapes the Butterface.

Neville says there's no one on his level.

Neville says that there's no way Aries is on his level, and if Aries doesn't get back to his commentator's desk, he'll break Aries orbital socket again.

He's got a question for Neville:

Just watch this, and make room in your schedule, because if you're not already, you're about to start watching 205 Live every week.

Apparently, Enzo & Cass have another shot at the titles tonight, for some reason.

Cesaro and Sheamus say they'll be watching to see if they choke again.

GOLDBERG GETS TO GLOAT

He comes down to the ring, wearing the belt over his street clothes.

He says the title belongs to the fans, then he says he has some information that he's never made public.

The crowd starts chanting CM Punk, and Goldberg responds "Yeah, I hear that!"

Paul Heyman comes out, says that he won't come down to the ring to offer congratulations.

He says he's here to introduce the challenger for the title.

And Lesnar comes down to the ring.

He gets in the ring, stands nose to nose with Goldberg.

'' The only person more happier than you for being Universal Champion is my client @BrockLesnar '' -@HeymanHustle #RAW pic.twitter.com/RofLuBt4LZ

He says Brock might be even happier than Goldberg is that he won.

So that Brock can win the title at Mania.

Heyman says it's a spoiler that Lesnar will walk out the reigning defending, undisputed champion, and Goldberg will just be Brock's bitch.

Brock then surprises Goldberg with an F-5, and just walks away.

First bump taken by the current champ in 13 years.

Still don't understand why this match is happening.

In the grand scheme of things, they really weren't screwed out of anything last night.

Enzo starts out, gets beat up a bit, makes the tag to Cass who beats up the other guys a bit.

Sheamus and Cesaro come down the ramp, watching the match.

Back from the break and Enzo is getty mollywhopped all over the ring.

He eventually makes the hot tag, Cass does his stuff.

He hits the Empire Elbow on Anderson, Gallows makes the save.

Everything breaks down, Enzo winds up hitting Cesaro and making him spill his coffee.

Then it's every man for himself.

It ends with Enzo on Cesaro's back, and Sheamus Brogue Kicking him in the face.

Building to a three corners match at Mania, no doubt.

We coiuld have had a four corners match, but the New Day aren't allowed to wrestle.

Enzo & Cass and Sheamus & Cesaro are jawing back and forth.

Foley makes a match for next week, these two teams will face off for the right to fight Gallows & Anderson at WrestleMania.

So maybe we're getting a two corners match.

After the two teams leave, Steph McMahon shows up, tells Foley to come to her office.

After the match, Tozawa calls out Kendrick, he wants a fight right now.

Kendrick comes out, says he'll have an answer for him on 205Live tomorrow night.

Keep telling me that they have a creative direction for these guys.

Former tag champs Primo & Epico are just made to look like fools for about two minutes, and then they lose.

Mick congratulates Bayley on her win.

Bayley says that after further contemplation, she says she wishes she hadn't won the way she did last night.

Her conscience is getting the better of her.

But Mick tells her, it doens't matter how you win, it just matters that you win.

Mick asks her who her opponent should be at Mania.

Sasha comes out, says she should get the match, and Bayley is about to agree.

The crowd wants it, too.

Then Charlotte comes out with her mute friend, Dana Brooke.

She says she was robbed last night, that Sasha interfered to make sure that Bayley was champ, because she knew that she'd never get another match for the title if Charlotte was the champ.

Stephanie McMahon comes out, and she's on the side of Charlotte.

She makes the match Charlotte vs Bayley at mania.

But Foley says that Sasha deserves to be in that match, too.

He proposes a match next week, Sasha vs Charlotte, winner gets the title shot.

Steph says, okay, but if Sasha wins, it's a triple threat.

Bayley vs Charlotte vs Sasha.

If Sasha wins, it's a triple threat at Mania.

These two don't want to fight each other.

Which is interesting, but doesn't make for a compelling match.

Back and forth @SashaBanksWWE and @itsBayleyWWE go early on! #RAW pic.twitter.com/qQtuSZJUgq

At one point, though, Sasha hits a big chop, then hits a headscissors and the action briefly spills to the outside.

More back and forth action.

It's good, but, and I can't stress this enough, IT SHOULDN'T BE HAPPENING.

Not for the first time on a Raw with absolutely ZERO build.

This could have been so important, and yet, it feels so not that.

Sasha is starting to be more ruthless as Charlotte and Dana come down to ringside.

She's able to lock in the Banks Statement, Bayley is crawling toward the ropes.

Dana gets up on the apron, while the ref is dealing with her, Charlotte tries to get involved on the other side of the ring, Sasha kicks her away, uses the momentum to roll Bayley into the center of the ring.

BAYLEY TAPS OUT!!! @SashaBanksWWE IS GOING TO WRESTLEMANIA!! #RAW pic.twitter.com/yK2tYVxKZS

After the match, Charlotte hits a big boot on both women, then poses with the title.

This was just weird.

Then Triple H joins the announce team live via satellite.

He puts over the WWE for providing top notch health care to their talents.

He says that Rollins thinks he's the man.

'' I didn't called myself THE MAN. Everyone else called me THE MAN '' -@TripleH #RAW pic.twitter.com/3KNP7sEa37

.@TripleH says a NIGHTMARE is waiting for @WWERollins if he dares show up at @WrestleMania against his doctor's orders. #RAW pic.twitter.com/e4o445bY1F

Jericho comes out on fire, but Joe tamps that down pretty quick.

Just one of the many DEVASTATING combinations in the arsenal of #TheDestroyer @SamoaJoe! #RAW pic.twitter.com/gqcFjtYBNd

Jericho fights back, hits a crossbody of the top.

Joe regains control, then Jericho tries for the Walls, but Joe fights out of it.

Jericho hits the the springboard dropkick, knocking him off the apron.

He tries a baseball slide kick under the ropes, but Joe sidesteps it, locks him in the Coquina Clutch.

Jericho is out on the outside, Joe gets back in the ring to beat the count.

After the match, Joe rolls Y2J back inside, follows and gets hit with a surprise Codebreaker.

Braun comes down, he's pissed, asks for a microphone.

He says that Roman got lucky last night, but his luck runs out tonight.

He doesn't want a match.

He just wants to beat the piss out of Roman.

Roman's music starts for a second, and then:

His music plays and he comes out.

Did The Undertaker kill Roman Reigns?

He takes his sweet time getting to the ring, that's for sure

The crowd is giving this a "HOLY SHIT HOLY SHIT" chant, and for good reason.

Strowman slowly backs out of the ring, ceding the ring to Taker.

He leaves through the crowd.

Why do you do this to us?

He comes out on the stage, stands there, staring down Taker.

Starts toward the ring, stops at the bottom of the ramp, gets in the ring.

He says that Braun callled him out, not you, Dead Man, so with all due respect, this is my yard now.

WHERE IS BRAUN STROWMAN? WHY DID HE JUST LEAVE?

Ugh, Raw. You never fail to disappoint me.