Welcome to the fightful.com's live coverage and discussion for 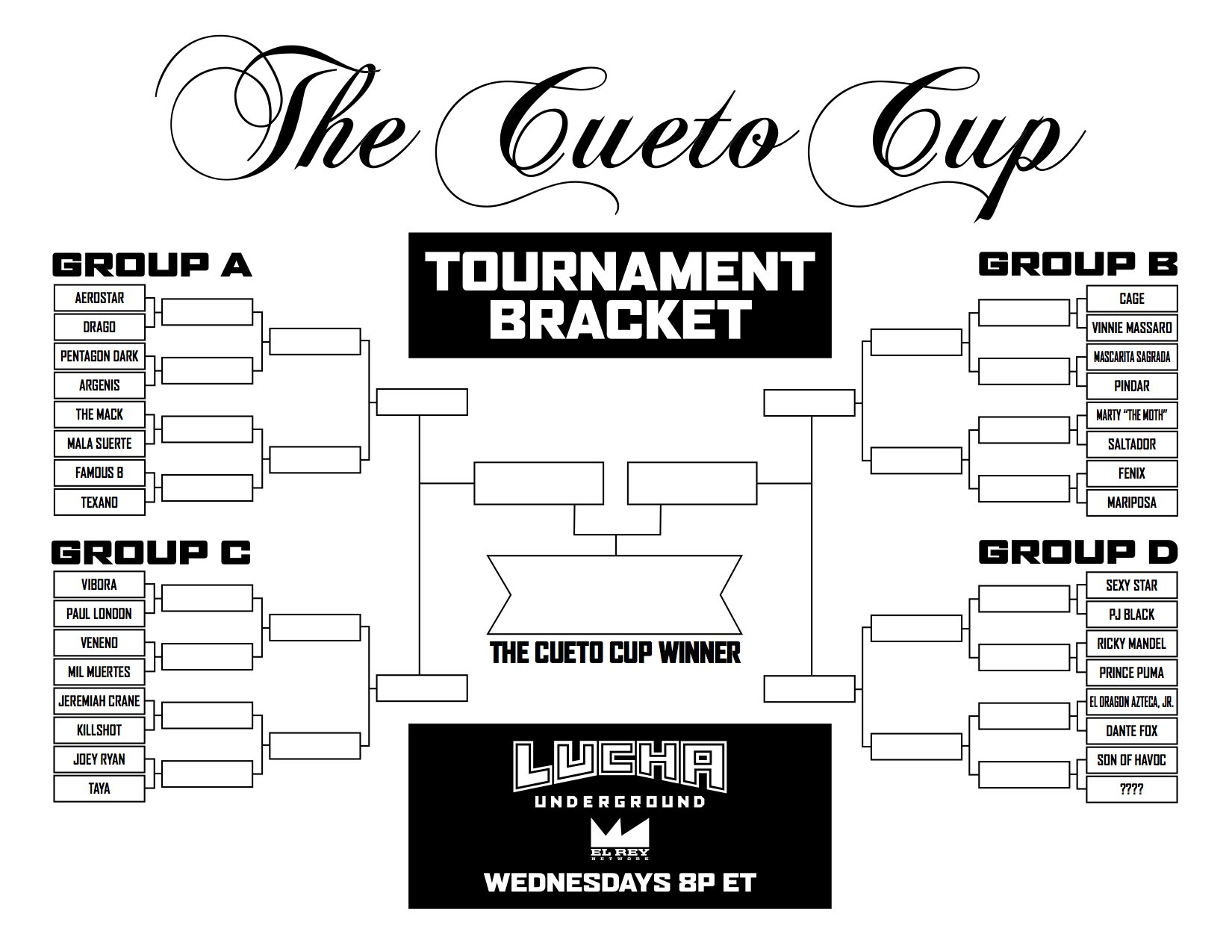 As you can see, there's a lot of matches to get through! (Also notice that Son of Havoc's challenger is to be determined.)Tonight, we will see Drago, now under the influence of Kobra Moon, go against his old team member Aerostar.  Follow us to see who will be getting eliminated, and who is one step closer to Lucha Underground gold! The action starts tonight on the El Rey Network at 8 EST.

We start in Dario's office with Pentagon Dark back! Pentagon grabs Cueto's finger forcefully after he pointed at him. Cueto says he will put Pentagon Dark in the Cueto Cup, Dark says if he does leave Ultima Lucha Tres with Lucha gold, he will break Dario's bones.

We are ready for the first round of the Cueto Cup!

Mala Suerte vs. The Mack

Lock up and Suerte takes control of Mack's left arm,reverses control and now has Suerte's left arm. Suerte is loses, rolls and gets thrown down by Mack. Suerte with leg sweeps and aversions. Suerte puts his hands outand gives slaps to Mack's ears, knee by Mack, cover and kick out. Suerte is in the corner and receives chops from Mack, now Mack receives a chop of his own. Mack with a Samoan Drop, back flip onto Suerte, cover and kick out. Suerte takes a minute to get up, goes to the turnbuckle, elbow to Mack's jaw, takes down the Mack, cover and kick out. Mack slow to get up now, Mack with a crossbody and it appears that the Mack's wrist is hurt. Mack back up and delivers huge boot to the face, suplex, cover and kick out by Suerte again. Mack looking for a stunner but gets caught, German suplex by Suerte to Mack, positions Mack in the corner, Suerte to the opposite side of the ring, jumps off the turnbuckle, runs to Mack for a senton, Mack back up and brings Suerte down with a slam, cover and kick out, Suerte back up and then Crucifix Bomb! Cover and Mack kicks out again. DDT by Suerte, goes to top rope again, Mack rolls out of the way, Mack delivers Stunner, cover and win! The Mack moves on in the Cueto Cup!

Cero Miedo chants ensue, Dark starts by catching Argenis with a drop kick while he is upside down in motion. Dark throws Argenis in the corner and then takes his legs out from under him. Argenis goes back to the corner and Dark does it again, bringing Argenis to the ground. Argenis finally gets up and Dark gives him a slingblade clothesline. Then a kick to the face. Argenis needs something big to get back in this match up. He comes back with a slap and then a kick. Dark with a chop with Argenis on the apron, Dark goes to the outside and Argenis with a moonsault on to Dark. Argenis throws Dark back in teh ring and Dark has control again with a series of chops. Argenis gets Dark down and goes for a cover, kick out by Dark. Dark tosses Argenis in the turnbuckle on his head, cover and kick out by Argenis.  Argenis slow to get up, Dark helps him up and then takes him back down with a kick to the face. Argenis with a cutter, cover and kick out. Pentagon with a Cero Miedo Driver, cover and kick out. Argenis gets a kick to the leg, goes upside down in the turnbuckle and Dark kicks him in the face, Dark delivers Package Piledriver, cover and takes the win. Pentagon is done there, he takes the arm of Argenis and pulls it back with tremendous force possibly breaking his arm.

Texano vs. Famous B

Famous B says he does not want to fight Texano, he wants to represent him. Famous B says he wants Texano to pin him, Texano acts like he is going to but wants to inflict damage first! Powerbomb! Texano with the cover and win. Texano gains a spank from Beautiful Brenda and he looks pretty happy about it.

Winner: Texano via pinfall with powerbomb

Video package on Rey Meysterio who will be facing Johnny Mundo for the Lucha Underground Championship at the end of the Cueto Cup.

Drago comes to the ring on a literal leash held by Kobra Moon. She takes off his chain and instructs him inside the ring. Here we go. Aerostar tries to tell him to "wake up" and then kicks and punches from Drago. Drago gets him with a series of more kicks, throws ihim in the corner then huge kick to the chin. Drago tries to send Aerostar to the corner again and Aersostar reverses, gets in some damage but then Drago reverses and gets Aerostar down in the middle of the ring. Aerostargains momentum, running rana, gets on the apron, kick, sends Drago outside, Aerostar tries to run out at him but Kobra catches his feet and brings him down allowing Drago back in the ring. Drago with a cutter, cover and kick out by Aerostar. Drago with a series of chops and kicks while Aerostar is in the corner. Drago ends up outside again and Aerostar with a suicide dive and both men go into the chairs. Aerostar gets back up and on the apron, Kobra gets in some cheap shots while the ref is occupied with checking on Drago. Aerostar gets up on the apron, jumps in on Drago, Drago takes his legs out, brings Aerostardown, Barrel roll by Drago! Aerostar backup and has Drago in modified clover leaf death lock. Drago manages to make it to the ropes for a break. Both men are up, AErostar looking for submission but couldn't lock it. Drago with flipping blockbuster. The two roll trying to get the pin, it's Drago that lands the Whip of the Dragon's Lair. Cover and Drago takes the win.

Winner: Drago via pinfall with Whip of the Dragon's Lair

Kobra instructs Drago to "kill" Aerostar, Drago continues the beatdown on Aerostar until he is no longer moving in the ring. Kobra puts Drago's collar back on.

Cage makes it to City Hall to meet with Delgado. He says that the metal glove is working. Cage says he does not work for him. Delgado says he will, Cage's life will have a purpose. Cage grabs Delgado with his hand and apologizes. Delgado says it's ok, he is still thinking like a man. Then Cage punches his brains in! Literally! He just killed the guy! Cage says "I'm not a man, I'm a machine." He just killed that guy and stepped on his eyeball!

The Cueto Cup returns next week on Lucha Underground!