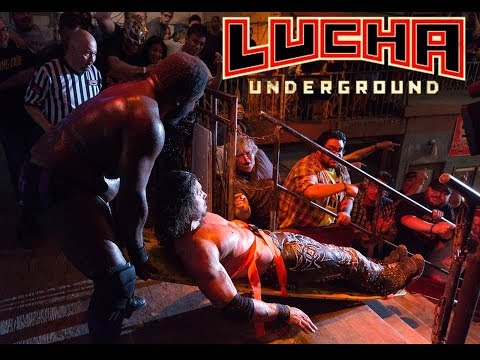 Meysterio is concerned about Prince Puma being swayed by a master. Meysterio then gets a warning from a ghotstly Vampiro about him going straight to hell.

Here we go! "Return of the Mack" chants are being yelled. Let's see who takes the Lucha Underground Championship in Sudden Death! Dario Cueto says no ties in Lucha Underground and makes it falls count anywhere!!!

We start with a series of kicks my Mundo, Mack with a slam and backflip, cover and kick out by Mundo.Running clothesline by Mack into the cover. Mundo turns it around, goes for a quick cover, no luck, slams his elbows into Mack and gets him up and in the corner, Mack catches him off guard and they go outside the ring. Mack goes for a cover ring side and kick out by Mundo again. The crowd starts to move away from their seats as Mack and Mundo move towards them. Mack places Mundo on the chairs and a running cannonball onto Mundo. These guys are moving fast, looking to finish each other quick. Mack goes under the ring and pulls out a ton of chairs and piles them on top of each other. He throws a chair into Mundo and hits him the chair in Mundo's torso then tosses him onto the pile of chairs. Cover and kick out by Mundo again. Mundo tries to get away but Mack still wields the chair, swings and misses twice as Mundo runs from Mack.  Mack tries to get up to him and Ricky Mandel comes to Mundo's aid again. Mundo flips off the balcony onto Mack and goes for a cover and Mack kicks out again! Mundo akd Mandel for help but Sexy Star comes out to help! She beats up on Mandel as he runs backstage. Mundo has hold of a trash can and slams it into Mack, Mack comes back with a few huge slaps and throws him onto the trash can. Cover and count out. Mack is bringing out the tables and P.J. Black is hiding under the ring! He gets Mack down with cheap shots with a kendo stick and Black sets up the table. Black has Mack but Mack gives him a stunner on the apron and Black falls into the table he just set up. Mack in the ring and Mundo jumps in takes control of the match with jumps off the rope, running knees, then Endo of the World but  Mack got his knees up, Mack turns it around and powerbombs Mundo, cover and kick out again by Mundo! Mack gets on the apron and pulls Mundo towards him, looking to use the chair pile to his advantage. Mundo reverses, then they exchange back and forth, Mundo gets kicked  in the stomach, Taya comes out and helps Mundo before Mack can throw him into the chairs. Johnny reverses and Mack gets powerbombed into the pile of steel chairs, Mundo with the cover and win. With the help of Taya, Johnny Mundo retains his Lucha Underground Championship.

Winner: Johnny Mundo with powerbomb onto pile of steel chairs

Dario Cueto is in the ring and says that he has a new concept that is the most imaginitive wrestling has ever seen. He calls it "The Cueto Cup" and Melissa Santos brings out a giant cup/trophy. Starting next week there will be a single elimination tournatment featuring 32 contenders who win the Cueto Cup and a championship match at Ultima Lucha Tres. At the night that the Cueto Cup is awarded, Johnny Mundo will be facing Rey Meysterio for the Lucha Underground Championship!!!

We start off with Pindar and Aerostar, Pindar has the size advantage, they go back and forth until Pindar gets down with an arm drag and then gets on the apron, Aerostar rushes in, gets reversed and falls on the ropes. Aerstar gets momentum back only for a second, and Aerostar's fancy footwork earns him the upper hand in the match with Pindar taking a minute outside the ring. Pindar gets back in gets Aerostar down and makes the tag to Vibora, they double team Aerostar and he takes control of Aerostar, wearing him down. Aerostar takes a series of knees and then a suplex and Aerostaris in the corner on top turnbuckle and falls out of the ring. Vibora tags in Pindar and Kobra Moon kicks Aerostar while the ref isn't looking. Aerostar back in the ring and is on the top turnbuckle then is on standing on top of Pindar and gives him a neck breaking frankensteiner, now Fenix is in the ring and he is on fire, he goes outside the ring but Vibora takes control and gives Fenix a tombstone piledriver! Back in the ring Aerostar is legal and goes to tag Drago and Drago blew some kind of blue smoke in his face. Kobra Moon calls Drago over to their side and he follows and is made a legal member of Kobra's team who apparently was never legal! Drago turned on his team. Vibora and Pindar hold Aerostar while Drago does a frog splash on him, cover and we have new Trios Champions! Drago is then put on Kobra's chain. She has control of Drago now.

Mundo talks to Ricky and asks where is champagne is, Taya told him to hold it. Johnny said they should be celebrating all night long. Taya says that she has bad news and breaks it to him that he has to defend his championship against Rey Meysterio. Johnny tells Ricky to warm up the car and he needs to go to his dojo to train harder than ever.

Puma goes in with a huge dropkick and Mil tries to get him in the corner but Puma returns with more kicks, dropkick off the top rope, flies over the top rope onto Mil outside the ring and Puma is grabbing a table!  Puma sets up the table and Mil with a spear through the table! Mil continues to take the broken table and hit Puma with it. Mil sends Puma into the set up chairs, Mil grabs Puma and slamps him then knife edge chops, DDT on the floor. Muertes grabs a stop sign from under the ring, Puma is back up and tosses a road sign on Mil, then Puma with a DDT. Puma with a shoulder to the face then Puma gets height on Mil as he gets into the upper stands, then Muertes with a road sign to Puma's head. They are still in the stands in the crowd. Puma fights back with chops and Puma is on the steps followed by Mil, Mil chokes Puma and Puma give Mil right hands. Pum delivers kicks to the head after almost going off the stair railing.  Puma grabs a crowd members shoe and hits Mil with it. Mil lifts Puma on his shoulder and is carrying Puma back to the ring. Puma tries to get in some elbows but Muertes gives him a modified TKO. Mil grabs Puma by the throat and Puma does a kick off the way and gets Mil down! Puma with a trash can and throws it into the ring after hitting Mil with it. Puma grabs Mil and Mil gets kicked repeatedly in the crowd. Mil throws Puma off the stairs into the wall, they start fighting in Cueto's office. They move back outside with Cueto looking on. Puma grabs a wrench and powerslam by Mil. Mil going over to Vampiro now and stares him down. Mil rolls Puma in the ring and throws him into the turnbuckle and give him right arms. Mil with another slam, goes for the cover and Puma kicks out! Both are back up Puma gives him elbows to the head and neck, Puma hits him over the head with the trash can lid. Puma has the trash can, places it on Mil in the turnbuckle, Puma does a drop kick from the other end of the ring! Cover and kick out by Mil. Puma to the top rope and does several flips before landing on Mil. Catrina comes in and hits Puma in the face and goes to check on Mil. Vampiro goes to the ring and hands Puma a brick.Puma hits Mil in the head with the brick, cover and Puma takes the win!

Winner: Prince Puma after hitting Mil Muertes with a brick