Follow along here for all the results from Night Two of Ultima Lucha Dos.

Get Ready, all you Believers out there.

We're about to enter the Temple.

Tonight; the Gift of the Gods Championship will be decided, and King Cuerno faces Mil Muertes in a Death Match. 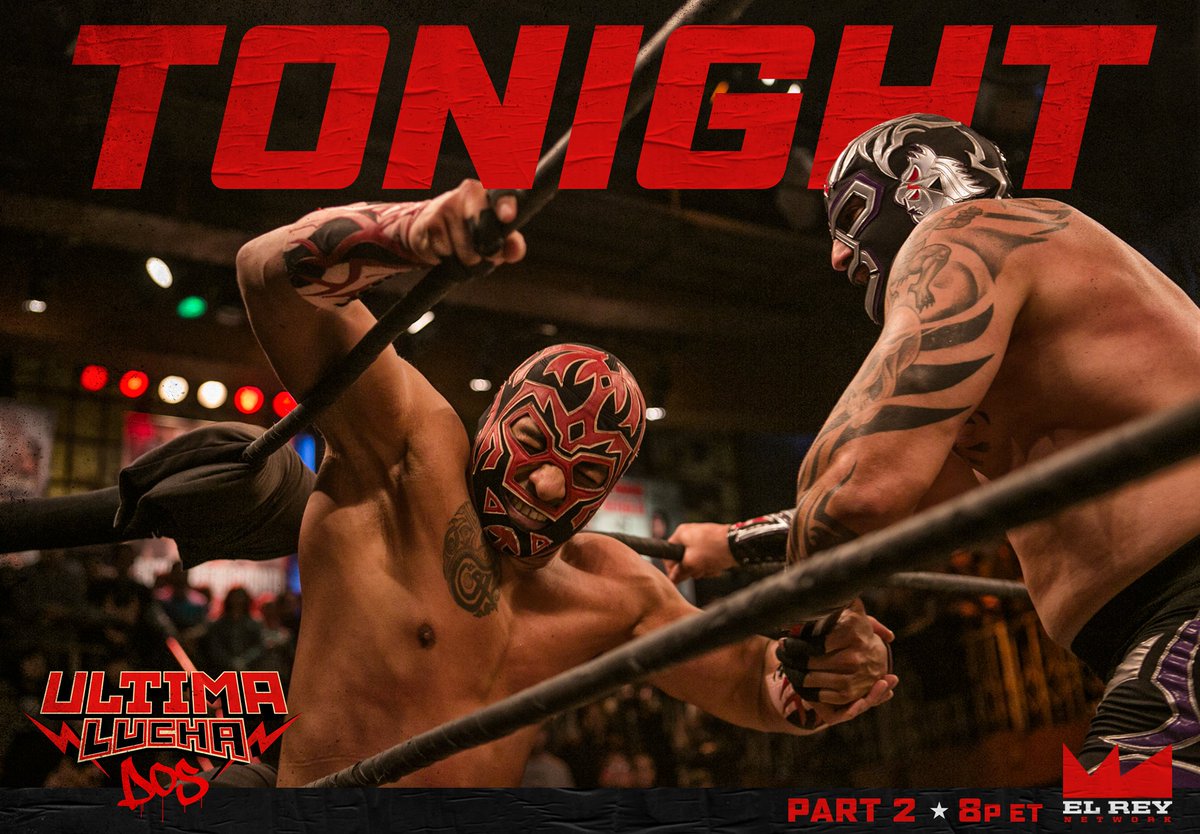 Killshot goes right after Marty the Moth, choking him with his camo vest.

Sexy Star and Mariposa pair off as well, going at it on the outside.

A LOT OF FAST PACED ACTION. TOO HARD TO KEEP UP.
SHOULD HAVE SENT A STENOGRAPHER.

Siniestro De La Muerte is eliminated by NightClaw with a Spanish Fly off the Irish Whip.

We go to commercial...

Back from the break and we get one of those amazing extended spots that have become LU's signature:
Everyone taking turns doing planchas to the outside. It's awesome.

Daga is about to choke out Marty The Moth with a Guillotine, but NightClaw breaks it up with a leg drop off the top rope.

NightClaw eliminates Daga after a Frankensteiner from the top rope, followed by a Phoenix Splash.

NightClaw hits an amazing Moonsault from the top of Cueto's office.

Killshot wrecks shop on everybody for a while, including giving Mariposa amateur spinal surgery,

Killshot and Sexy Star team up to work against the lepidopterist siblings for a while, but Sexy is taken out of the action, and they gang up on Killshot.

Marty hits a VICIOUS Curb Stomp on Killshot, and Mariposa hits the Butterfly Effect (a Vertebreaker) for the pinfall.

And then there were three.

Marty and Mariposa work over Sexy Star. Mariposa holds Sexy so Marty can deliver the knockout blow, but ...

Sexy ducks out of the way, Marty's punch KOs his own sister, Sexy knocks him out of the ring, and pins Mariposa.

After a pretty brutal sequence that showed Sexy Star's never give up attitude,

Sexy Star locks in the Cross Armbreaker and Marty taps out!

YOUR NEW GIFT OF THE GODS CHAMPION, SEXY STAR

This thing was brutal. Cuerno hits his Arrow from the Depths of Hell early in the match, and then it's just Mil Muertes chasing the hunter all over the temple, hitting him with everything he's got, knocking him off the bandstand at point, putting him through a table, hitting him with A DAMN CROWBAR, before destroying Cuerno with a Tombstone Piledriver.

Oh, by the way, I should mention that Dario Cueto bludgeoned a man to death in his office with a bull sculpture tonight.

Yeah, so Joey Ryan and Cortez Castro are undercover cops who have infiltrated the temple, looking for dirt on Dario. While snooping around his office, they were stumbled upon by their stablemate Mr. Cisco. He threatened to tell Dario, and they had no choice but to reveal their true identities and arrest Cisco. But he has agreed to work for him in exchange for leniency.

(Note: I'm not entirely sure what the cops have on Cisco. I mean, sure he seems kind of criminal-ish, but I don't think we've seen him commit any crimes. Unless the mere act of competing in this underground fighting tournament is itself illegal. Which would be a total gamechanger.)

Anyway, they convince Cisco to wear a wire, and he goes into Cueto's office and is just the worst actor ever. "Whatever you're doing boss, I want in. I can be, you know, a good soldier." It takes about seven seconds for Cueto to ask, "Are you wearing a wire?"

So Cueto rips the wire off Cisco, and the cops can't hear what happens next. "What do they want me for?" Cueto asks, "Murder?"

"WELL THEY DO NOW!!!!" and with that, Cueto picks up the bull statue on his desk (the same one his half-brother (splatterhouse mechanic hoss) used to beat their own mother to death--relax, she had it coming (it's a long story)) and he beats Cisco to death with it.

He gets on the phone and calls someone, we have no idea who, and just says, "It's time."

So yeah, this is me for the entire next week:

Join me next week, won't you?