Sound off in the comments and join our
LIVE VIEWING PARTY 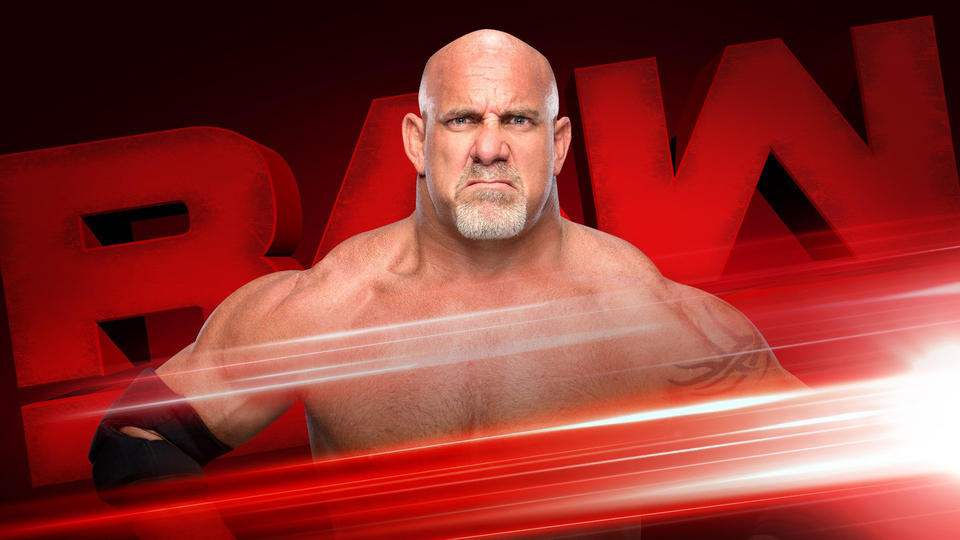 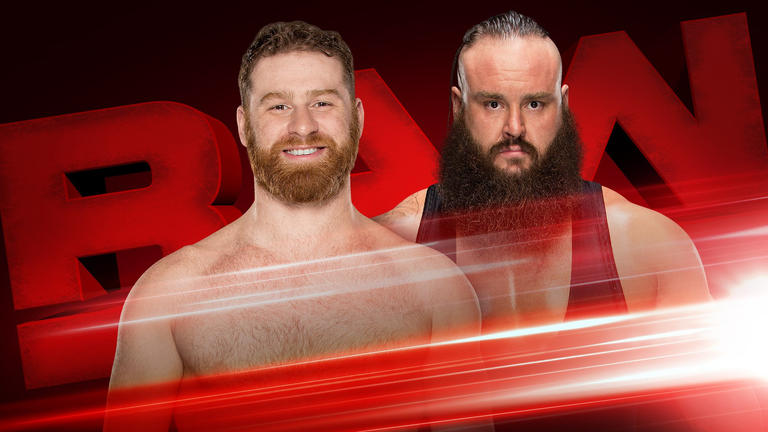 Also a bunch of other stuff.
That stuff will probably suck.

Mick Foley is out to start the show, and he's had a haircut.

It looks like it was cut with a weed whacker, but it's definitely a haircut.

He says his resolution was to make a change this year.

Also, to make sure Kevin Owens has to defend his Universal Title without the help of Chris Jericho, and he gestures to the shark cage at the top of the ramp.

Owens and Jericho come down to the ring and they re-hash everything about this stupid Roman Reigns-rematch-with-Jericho-in-a-shark-cage angle, and Kevin Owens says that Mick Foley has had it out for them for months.

TONIGHT: It's the first-ever edition of the #KevinOwensShow, as @FightOwensFight welcomes special guest @GOLDBERG on #RAW on @USA_Network! pic.twitter.com/gyiTYiOKIO

Owens and Jericho say mean things to Foley. (And with good cause. He's terrible in this segment.)

Stephanie McMahon comes out to defend Foley and she makes a match Chris Jericho vs Roman for the US Title, and if Roman is disqualified or loses vs countout, he loses the title.

Also, Kevin Owens will face Seth Rollins and the loser will be banned from ringside in that US Title match.

Rollins hits a coupe of plancha crossbodies to the outside, then Owens takes control by throwing Rollins into the barricade and stomping him down inside the ring.

Rollins comes back briefly, but Owens shuts that down pretty quick.

Back from the break and Kevin is in the driver's seat. Until he misses an attempted cannonball to the Seth against the barricade.

A popup powerbomb misfires as well, countered by an Enzuigiri.

Slingblade, then a few moves later, Rollins hits a suicide dive to the outside and throws Owens into the timekeeper's area.

Owens hits Rollins in the gut with the ring bell, the ref sees it, disqualifies him.

Now Kevin Owens is banned from ringside for Jericho's match.

This is the worst episode of Raw in the history of ever.

Sheamus is on commentary. Gallows is standing ringside.

I hope Anderson actually gets to show what he can do here.

Starts off slow, a lot of back and forth, so hopefully this gets some decent time.

Cesaro has a good spot where he does a stalling gut wrench suplex, but Anderson back body drops him to the apron then knocks him off with a running rocket kick.

Back from the break, we get a deadlift vertical suplex from Cesaro, then Anderson takes control back.

An awesome stepup springboard crossbody out of the turnbuckle gets a two count for Cesaro.

Sheamus gets up from the commentary desk, goes down to ringside.

Later, Anderson is sitting on the top rope, Cesaro was going for a superplex, Gallows on the apron, Sheamus pulled Gallows down, and in the process, Gallows yanked the top rope.

Cesaro is crotched, then falls into the ring.

Sheamus is chasing Gallows around the ring, Anderson jumps into a neckbreaker from the second rope.

Sami starts by sticking and moving.

Then runs out to the timekeeper's area, grabs a kendo stick. Uses it on Braun for a bit. Braun takes it from him, breaks it over his knee.

Braun throws him all the way across the ring. Sami rolls to the outside, gets another kendo stick smacks Braun with it several times.

Braun takes it from him, throws it away.

Sami attempts a moonsault, gets caught and dropped chin first on the barricade.

Sami attempts his running corner-cut tornado DDT, BRAUN PUNCHES HIM OUT OF THE AIR.

Ref counts, Sami makes it into the ring.

Now it's just Braun beating on Sami, Sami making it to his feet at the count of like Seven.

Finally, Sami just rolls out of the ring, stands up on the outside.

Back from the break and we're around the commentary desk, Strowman throws him into the backstage area.

Sami comes up with a hard plastic bat-looking thing, hits Strowman with it a bunch.

Strowman takes it from him, throws it away, then throws Sami away. Throws stuff at Sami.

Sami gets a chair, hits Strowman with it. Strowman retreats to the stage area.

Sami gets his chair back hits Strowman with it a bunch more, crossbodies Strowman off the stage through a table.

Strowman to his feet at 7ish.

Sami goes to work with the chair again. Braun grabs the chair, yanks it and Sami into the air, Sami rolls down to the ringside area.

Running Powerslam on the floor by Strowman.

Ref count, Sami almost makes it to his feet by 8, Braun interrupts the count.

A whole bunch of kneelifts. Sami struggles to get to his feet, Braun breaks the count, RUNNING POWERSLAM ON THE FLOOR AGAIN.

Mick Foley comes down with EMTs to stretcher Sami out.

As Sami is on the stretcher, Braun bowls it over, picks Sami up and slings him into the barricade.

The announce team sells it like Sami is probably dying.

Backstage this bit of perfection happens...

...and then there's no payoff.

They announce they're all going to be in the Royal Rumble Match.

Then they're interrupted by Titus O'Neil, who says that he wants to be in the New Day.

He's trying to be nice, and he's even respectful. But when he says he wants to be on the front of a Booty-O's box, Xavier Woods takes exception.

"Everyone around the world would rather see your face on the back of a milk carton." #RAW

Titus says those are some big words coming from the weak link in The New Day.

Woods says how bout I show you how much of a weak link I am, "if you're man enough."

Titus clocks Woods in the mouth, says you want a match, you got it.

Titus in control for much of the action, but Xavier is a game opponent.

Woods goes for a flying crossbody off the top rope, but is caught in a that triple back breaker thing that Titus does.

Titus picks him up into that thing again, then Xavier reverses it into a Sunset Flip roll-up for the 1-2-3.

Backstage with Stephanie and Bayley

Stephanie tells her that she never wanted Bayley on Raw, that it was all Mick Foley's idea.

He said Bayley had what it takes to be the face of Raw, but Steph just doesn't see it.

Bayley says that doesn't matter, no one can stop her from achieving her dreams.

Okay, Stephanie says, you're in a Number 1 Contender's Match, and the winner faces Charlotte at the Royal Rumble.

"Your opponent is Nia Jax."

It's a NEW YEAR, but is this a NEW @noamdar? He "attempts" to apologize to @AliciaFoxy and @CedricAlexander... #RAW pic.twitter.com/SfyZgBCs5z

Alicia Fox and Tony Nese at ringside for their respective combatants.

Gulak takes control with his "body slam the other guy's legs into the ring ropes" thingy.

Alexander hits the handspring kick thing, then Nese gets up on the apron, Alicia pulls him off, Cedric is distracted, and Gulak gets the roll-up.

It literally kills a small part of me knowing that Cedric Alexander is being used like this.

Rollins interferes in this match, costing Roman the title, right?

Jericho hits a missile dropkick from the top rope, then a springboard dropkick to a Superman Punching on the apron Roman.

On the outside, Roman punches Jericho, then goes for a totally awkward Drive-By, Jericho dodges it and Roman hits his head on the post.

He barely beats the ten count back into the ring.

Back from the break and Jericho is slapping him, until Roman remembers he's Wolverine, and he slaps back, harder because he is so powerful.

The power of Roman Reigns.

Jericho tries a Lionsault, Roman gets the knees up.

With Roman down in the corner, Jericho pulls off a different the turnbuckle pad, the ref sees him, starts to put it back on, Jericho goes to get the Title Belt, tosses it to Roman, and falls down, trying to pull an Eddie Guerrero.

The ref turns around, sees Roman with the belt, Roman says he didn't do it, and IN THE FIRST INSTANCE OF THIS HAPPENING IN THE HISTORY OF WRESTLING, THE REF BELIEVES HIM.

Jericho gets up, hits a Codebreaker.

Jericho charges Roman in the corner, hits his head on the exposed steel, turns around and staggers right into a Spear.

And the world is shit.

We've seen this match a hundred times since September.

Kendrick goes for Sliced Bread, TJP catches him in position for the Detonation Kick, right into the Kneebar.

Detonation Kick into the KNEEBAR!! @MegaTJP picks up the submission victory on #RAW!! #205Live pic.twitter.com/8AyBs2oLrC

Seriously. It's a handicap match.

I don't even know anymore, man.

Cass runs wild over these two men, both nearly as big as he is, until a distraction from Jinder leads to Rusev landing his big kick to the side of the head.

They PROMOTED this match earlier today.

They WANTED you to look forward to it.

Charlotte is on commentary.

Nia is ragdolling Bayley all over the place, hits a shoulderbreaker.

BAYLEY TO BELLY off the top rope!!!
Thanks to @SashaBanksWWE's distraction, @ItsBayleyWWE defeats @NiaJaxWWE to become #1Contender!! #RAW pic.twitter.com/9qHEAwwMrV

It's ALL SMILES for new #1Contender @ItsBayleyWWE and #TheBoss @SashaBanksWWE! #RAW pic.twitter.com/QhRTmUmTDu

And just like that, they ended Nia Jax's unbeaten streak on the main roster in a match on Raw that nobody watched.

Here is the set for The Kevin Owens Show.

Jericho is out for this, too.

He puts Tampa Bay on the list for chanting for Goldberg.

He says he's going to be in the Royal Rumble match.

Owens doesn't like that, he doesn't want to fight his best friend at Wrestlemania.

Goldberg's music hits and he walks to the ring to crush my dreams forever.

He steps into the ring, picks up a microphone.

If you're in the Royal Rumble, he says to Jericho, it means "you're first!"

He and Owens start jawing at each other, then Paul Heyman shows up.

Then he says to Owens, whether it's you or Roman, we got a date at Mania.

Roman Reigns' music hits, he comes out and he calls Owens delusional, then he gets in Goldberg's face.

He comes down, plucks the mic from a cowering Paul Heyman's hand.

"IF ANYONE'S WINNING THE ROYAL RUMBLE, IT'S ME."

He gets in the ring and Goldberg and Roman double spear him.

That could have been good.