Sound off in the comments below and join our 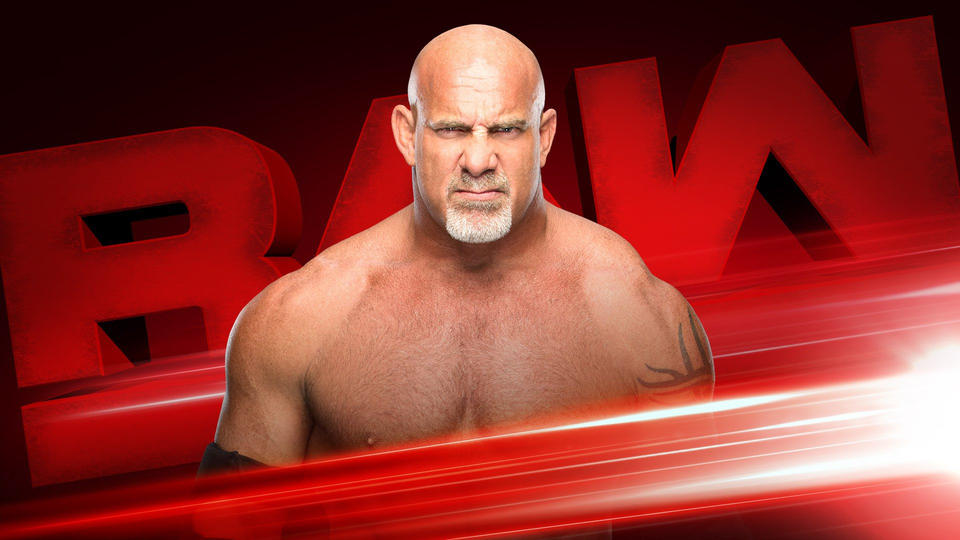 (and hopefully refrains from giving himself a concussion) 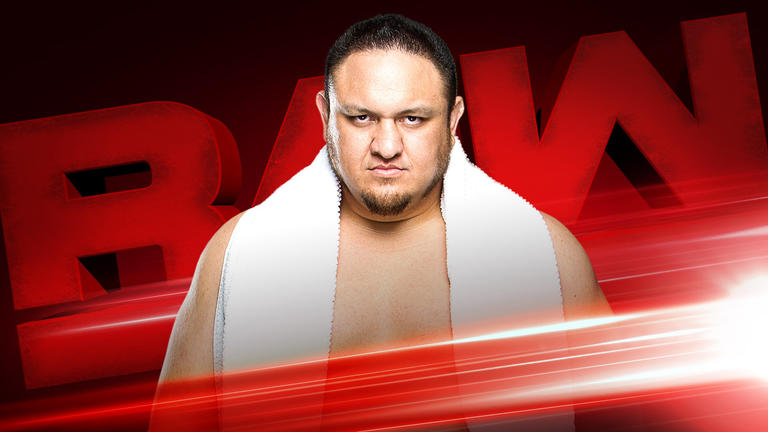 (and we find out what the hell they're going to do with him now that Seth Rollins is injured.)

At last! A fresh new matchup in the Tag Divison! 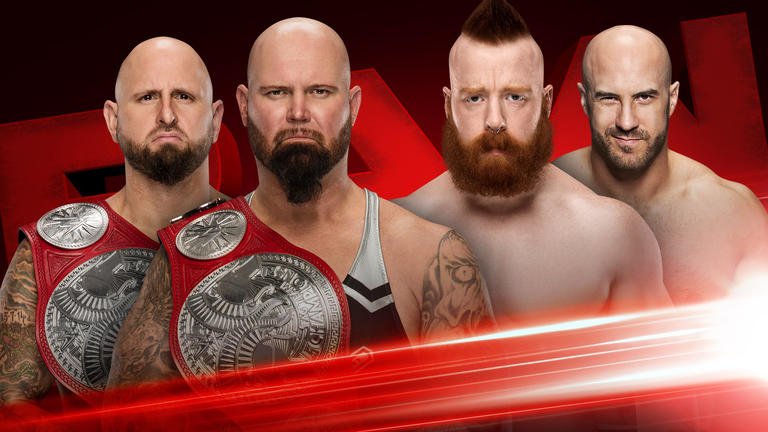 Mick Foley and Stephanie McMahon In The Ring.

Foley is like, can we get on with it?

Steph emasculates him, Foley says he's been a big fan of Joe for years, but he says he didn't like how Joe made his debut last week.

Joe says he's been trying to get to a WWE ring for 18 years, and only one guy helped him make that happen, Triple H, and if all he had to do was put Seth Rollins on the shelf, then that's cool.

He also puts the entire locker room on notice, and Roman Reigns comes out.

He says it's his yard and Joe has two choices, either he can shut his mouth, or Roman will "cave it in."

They have a staredown, Mick Foley is like "I'm important, too!" and he makes a match for tonight, Roman Reigns vs Samoa Joe.

Well that was quick. Pulling that card out of the deck on Joe's first official night in the company is a rash decision, but we'll have to see how that pans out.

They announce Bayley gets a Championship match against Charlotte next week on Raw.
Welp. It's not a PPV, so ...

Nia running through Bayley to start, throwing her all over the ring, kicking her while she's down.

Bayley mounts a comeback for about two and a half seconds, before Nia throws her nose first into the second turnbuckle.

Nia still in control until Bayley dodges her in the cornner, and follows up with a lot of elbows.

Action spills to the outside, Nia runs into the post (twice!) and the Ref begins to count her out.

Charlotte runs down to the ring, attempts to interfere but Bayley cuts her off at the pass.

However, as Bayley is distracted by Charlotte, she turns around and walks right into a Samoan Drop.

Charlotte gets in the ring and stands tall as Nia backs up the ramp to end the segment.

BRAUN STROWMAN vs FOUR JOBBERS AT ONCE

One guy lasts about a minute before he just runs away.

He is the lucky one.

Braun destroys the rest, hits the Running Powerslam on one and stacks the other two on top of him.

He pins all three of them.

After the match, he gets on the mic says "Foley, you call this competition? I warned you and now I'm coming to the back to find you."

Because I just traveled through time and it is 3 months ago.

But actually, once he finds Foley, Foley is like, how about a match with Roman Reigns, one on one, at FastLane?

Braun is pleased by this.

The way the cruiserweights are booked and agented and used and marketed makes me so sad.

Tozawa should be a huge international star. Instead, the crowd literally gives no shits.

He does hit an AMAZING Suicide Dive Headbutt, though, followed by a Shining Wizard followed by a PRISTINE Snap Bridging German Suplex.

I love Akira Tozawa. And I want you to love him too.

After the match, Brian Kendrick comes out for some reason to shake Tozawa's hand.

No sucker punch, no sneak attack. Nothing.

They talk about how great they are. Expected.

Then Jericho says that Tom Brady is being called the greatest of all time, and that's HIS thing.

Then Jericho says that he and Kevin Owens should be in a match together at WrestleMania for the Universal Championship.

Everyone pops, but Owens says he doesn't know if he can fight his best friend.

Because of course it does.

He comes down to the ring. He calls Owens and Jericho "Ladies" and orders them to step aside, that is, unless they'd like to grow a pair.

They step aside, because they are cowards.

Goldberg says he accepts Brock Lesnar's challenge to a match at WrestleMania.

Jericho and Owens give him a polite golf clap, says that Goldberg vs Lesnar would be a good undercard match at Mania.

Goldberg challenges Owens to a title match at FastLane.

Then Jericho flips out about the list-putting and how he's the only one that's allowed to do it, and he says that Owens accepts Goldberg's challenge.

Enzo & Big Cass are watching at ringside because they apparently get to challenge the winners.

Early on, good teamwork from Cesaro and Sheamus, a couple of cool double team moves.

Cesaro winds up on the outside and, with Anderson distracting the ref, Gallows kicks him in the head and the heels take control.

Sheamus eventually gets the hot tag and runs all over both of the good brothers.

They get a nearfall on Anderson after another nifty double team move, but Gallows breaks up the pin.

Gallows winds up on the outside and attacks Enzo. Big Cass gives Gallows a Big Boot, and the ref calls for the bell.

This was so stupid. I hate Raw.

SETH ROLLINS MEDICAL UPDATE IS NEXT

There was literally no medical update.

They showed the video package from the beginning of the show again, then showed us Rollins' tweet from last week.

We still haven't been given a diagnosis or a timeframe for his return. Not even a kayfabe one.

THE NEW DAY vs THE SHINING STARS

This is what they are doing with the longest reigning tag champs and three of the biggest merch movers.

They talk about ice cream in a promo that goes nohwere.

The match is pointless. They basically did this last week on Main Event, except Titus O'Neil was involved for some reason.

Woods is playing face in peril, Primo & Epico are working well together, eventually Big E gets the hot tag and starts Belly to Bellying everything in sight.

Woods gets a tag in, he and Big E hit The Midnight Hour.

Tell me again why The Revival is languishing down in NXT when this is the state of the Tag Division?

He says that Kevin Owen has his back against Sami Zayn tonight, and sometimes friends have minor disagreements.

Owens shows up, he apologizes for doubting Jericho's intentions and they hug it out.

They're handling this just as ham-fistedly as I would have expected.

Owens is at ringside.

Jericho behaves like a coward, taking a powder on the outside, making Zayn chase him around the ring and back inside, where he kicks him as he slides back in.

Eventually Jericho is conferring with Owens on the outside and Zayn hits his running Tope Con Hilo on Jericho as Owens gets out of the way.

Back from the break and Jericho is in control. Somehow.

He hits the Lionsault for a two count.

Zayn hits the exploder into the corner, but Jericho counters the Helluva Kick into the Walls of Jericho which Zayn counters into a small package for a near fall.

Jericho counters a Tornado DDT into another Walls of Jericho.

Zayn gets to the ropes, and stays there, gathering his composure, as the ref pushes Jericho back.

Owens kicks Zayn in the head.

Yeah, it's basically just that.

Austin announces that since Rich Swann's ankle makes him unable to compete, there's going to be a Fatal Five Way Elimination Match tomorrow on 205Live between Cedric Alexander, TJ Perkins, Tony Nese, Noam Dar, and Jack Gallagher and the winner becomes #1 Contender to the Cruiserweight Championship.

One by one all of those guys come down and a brawl starts.

It ends when Neville refuses to do a running tope con hilo the outside and instead just stands tall in the ring.

That Fatal Five Way should be great, tho.

AND NOW THAT THING FROM BEFORE IS AN IMPROMPTU SIX MAN TAG.

Gallagher plays face in peril until he hits his crazy stiff headbutt on Nese's jaw.

He is able to make the tag to Perkins, who cleans house before a springboard crossbody gets him dropkicked out of the sky by Dar.

Dar tries to make a tag to Neville, but Neville just walks away.

Perkins attempts a Small Package, but it's broken up by Nese.

Alexander gets tagged in, hits the Lumbar Check on Dar.

Jericho pitches a big party to celebrate how much he and Owens like each other.

It's going to be called The Festival of Friendship, and it's going to happen next week on Raw, Live from Las Vegas.

Gosh, I wonder if this is gonna backfire at all.

Joe attacks Reigns as he's walking down the ramp, throwing him all around the outside ring area, into the barricade, into the ring post, hitting a running senton. Roman is doing his thing where he sells for a while, then he'll probably hulk up later.

The match hasn't actually started yet.

Back from the break and the match finally starts. Joe beats on Roman in the corner for about thirty seconds before Roman uses his Wolverine powers and heals his broken ribs.

He throws Joe to the outside, then hits a baseball slide kick through the bottom ropes. Back on the inside, Joe reverses an irish whip in the corner, hits a running elbow and an enzuigiri.

Reigns keeps coming back briefly, then Samoa Joe keeps putting him back down.

Joe hits a snap suplex for a one count, then puts Roman in a surfboard stretch. Roman fights out of it, of course.

Then the two trade blows for a bit, Joe hits a knee, Roman hits an elbow, then his stupid jumping clothesline.

Roman tries a samoan drop, but Joe fights out of it, Roman hits a big boot.

Joe hits one of his own, then a running senton.

Roman crawls to the corner, Joe runs in for the kick, then Roman catches him in a Samoan Drop.

Roman signals for the Superman Punch, but Joe rolls out of the ring.

Roman hits a Drive By dropkick, rolls Joe back into the ring.

He hits the Superman punch now, then signals for the spear.

Roman superman punches him off the apron.

Joe kicks Roman in the back of the head, then hits a really cool Rock Bottom off an irish whip.

After the match, Strowman beats the HELL out of Roman Reigns on the outside, hitting him with the stairs, then hitting a running powerslam on him through the barricade.