Welcome to the Live Coverage and Results
for the Post-Summerslam edition
of Monday Night Raw.

Join the Live Viewing Party in the Comments Below.

My name is Alex Pawlowski and I'll be your host for tonight's festivities.
Let's see what's on tap for the evening, according to WWE.com. 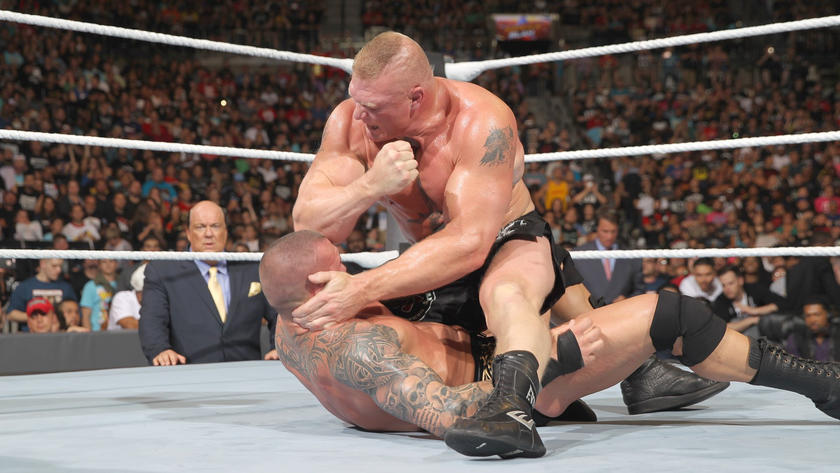 Looks like Brock's finally getting suspended. Not for the PED use.
Nope. For this: 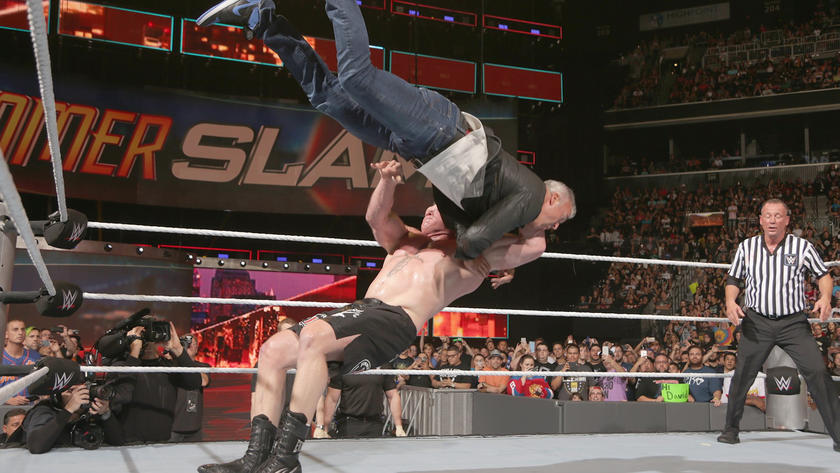 See you in October, Brock.

Is that the cure?
Because I think I'll take my chances with Advil and Vitamin C. 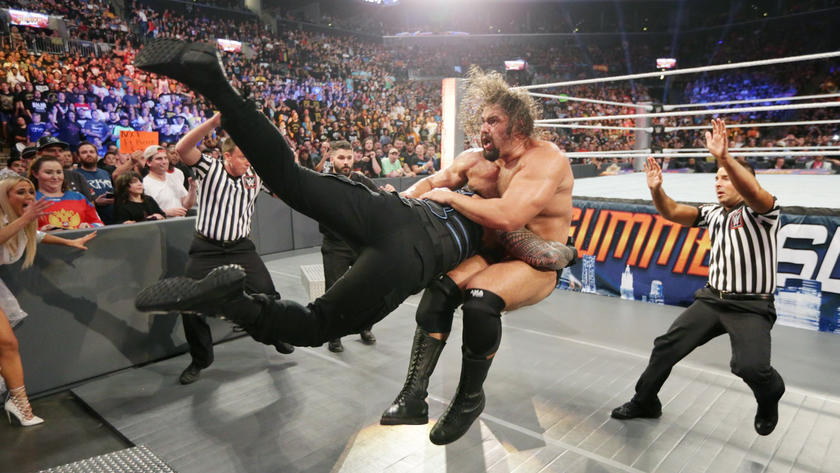 You made your point, Roman.

Come back at 8/7 c for all of the Post-Summerslam action!

On the Raw Pre-show,
the WWE announced that Finn Balor
has a torn labrum and will be out 6 months.
He will be relinquishing the Universal Title tonight.

HERE WE GO LADS AND LASSES.

We start with a recap of the Balor injury situation.

Foley and Stephanie are in the ring, they announce Finn Balor.

He comes out to his entrance music, his arm in a sling, the Twizzler Title on his good shoulder.

Finn cuts a promo about believing in yourself and achieving your dreams.

A promo about sacrifice.

He realized his dreams by winning the Twizzler Title last night, but there was a sacrifice.

He gives thanks to the WWE, all the talent in the back, Seth Rollins for giving him the match of his life, and especially the fans.

He says he’s got to give up the title but as soon as he’s healthy, he’s coming back to reclaim it.

Foley comes over, takes the title, raises his (good) arm.

Balor’s music plays him to the back, and just as he gets to the stage,

Rollins comes out with a shit-eating grin, smiles at Balor as he passes him on the stage.

He gets in the ring and hugs Stephanie.

He says that he's the true winner of the title.

HE PUTS OVER THE "BEAUTIFUL EXQUISITELY DESIGNED" TWIZZLER BELT.

He's the best heel on the planet.

He says he wants to be given the belt.

Foley and Stephanie say that everyone in the ring is deserving of a title match, (really? Enzo and Cass?) so they're going to have a series of matches, culiminating in the crowning of a new Twizzler Champion next week.

First up, after the break.

Back from the break, and they're selling the idea that Seth is now TRYING to injure his opponents. He gets Zayn up in the position for the barricade bomb (which is what took out Balor, in case you're just joining us), but Sami fights out of it. Sami then injures his ankle during a springboard leapfrog. So maybe they're selling that Seth's opponent's are cursed?

Back from the break, and Sami is fighting back valiantly. Strong style elbow exchanges. Rollins keeps gaining the upper hand, though. He puts Sami on the top rope, going for the superplex, but Sami counters with a sunset flip sitout powerbomb.

Sami counters a Pedigree attempt. He nails the exploder suplex, but can’t get up enough steam for the Helluva Kick, and gets caught with a running high knee. Rollins goes for the ankle, with stomps and submission attempts. Zayn gets a rope break and takes the advantage, but when he tries for a Michinoku driver, he can’t put any weight on his right leg. Rollins counters into a Pedigree.

Was there ever any doubt? I really wish they had paired Sami with someone else in the first round of this “Series of Matches,” so he might have made it to the finals.

Neville wasn't even in the opening segment.

And he's going through his greatest hits. He nails the apron 450 splash and his running corkscrew flip tope con hilo. But Jericho comes down the ramp, saying something like "How dare you! That's my partner!" This provides a distraction, and Kevin OBLITERATES Neville with a clothesline as we head to the break.

Owens trying to maintain control after the commercial, but Neville gets out of the way of the cannonball and hits a German Suplex(!).

He goes up for the Red Arrow, but Owens moves.

Owens hits a superkick, then tries for the Pop-Up Powerbomb, but Neville counters with a roll-up. Two Count.

Neville gets distracted by Jericho, kicks him in the face, but Owens catches him in his new TKO secondary finisher.

They announce that there will be a Fatal 4-Way next Monday to determine the new Universal Champion.

So far, Rollins and Owens are in it.

The New Day are celebrating their Tag Team Reign Birthday. It's been 365 days.

They have a Unicorn Pinata, which they say is full of Booty-O's Cereal.

Gallows & Anderson come out. They call this whole thing "Stupid."

I mean, they're not wrong. But it's still fun.

After the break, it's going to be Anderson vs Big E.

Big E in control after the break, does his Abdominal Stretch thing where he spanks the other guy to the tune of New Day Rocks.

Karl Anderson is upset by this, and takes over for a while, working Big E's legs.

Gallows takes out Woods and Kingston on the outside, while Big E goes for his spear off the apron spot and runs forehead first into Anderson's knee.

Kofi hits Trouble in Paradise and Woods hits a wicked DDT on Gallows. Anderson gets caught in the Big Ending.

He cuts a promo on Darren Young. I mean, if you could call it a promo and not a word salad with Poop Vinaigrette dressing.

He calls Backlund out, Backlund comes out, gets Titus in the Chickenwing, Titus gets out of it, bodyslams Backlund.

Darren Young comes out to make the save, gets Clash of the Titus'd for his troubles.

Finally, it ends. Our long national nightmare is over.

There's a backstage interview that lasts six seconds. Stephanie promises that there will be repercussions for Brock Lesnar's attack on her brother Shane last night.

Rusev comes out wearing black tape around his bruised ribs.

How did he get those bruised ribs?

HE WAS ASSAULTED BY A PSYCHOPATH.

And then Big Cass has the nerve to come out and say he's going to finish the job that Roman Reigns started and that Rusev is SAWFT?

Inexcusable. I hope Rusev eats Enzo for dinner in front of Big Cass.

Cass goes straight for the ribs, of course, as we go to the break.

Rusev is in control after commercial, but that's short lived when he misses a splash.

He kicks Enzo in the head on the outside, which makes Cass angry. Cass throws him chest first into the steps.

Back in the ring, a kick from Rusev, a Big Boot from Cass. Rusev rolls to the outside.

AND GETS COUNTED OUT?

This is stupid and I hate this.

They're still calling Tom Phillips "Phil," which I love, but they're teasing the break-up already, which makes me sad.

Dana tries to start a "You Deserve It" chant by herself, which is kind of great, to be honest.

Charlotte says she exposed Sasha as "all flash and no cash." Charlotte is the money of the Women's Division, she says.

The Queen has reclaimed her throne, says Charlotte.

Mick Foley comes out, congratulates Charlotte on a great match, but says that Sasha will be granted a rematch when she's healthy.

Charlotte says that until then, there's no one worthy of a title shot.

MICK FOLEY SAYS THEY SIGNED THE HOTTEST FREE AGENT OF THE NEW ERA.

The crowd goes out of their GOURDS.

Bayley says that she's been waiting for this her entire life and I literally started crying.

She teams up for the cheap pop with Foley, hugs him, it's adorable.

Charlotte says there's a reason she got left behind in NXT when the Divas Revolution happened.

Bayley challenges her for the Women's Title, but Charlotte says she's not dressed for it. But Dana is.

Bayley's debut on Raw happens NEXT.

Bayley shines for a while until Dana kicks her to the outside and throws her into the barricade.

Bayley kicks out of a pinfall, hits the back elbow from the second rope and nails the Bayley to Belly.

All of the feels, guys. ALL OF THEM.

Roman Reigns walking through a hallway for no reason when he gets pulled aside by Phil Phillips.

He says he's going to shut Jericho's mouth, "either with the scarf, or with this." When he says "This" he holds up his fist, like a moron.

I HATE HIM SO MUCH.

He says he likes big sweaty men. That seemed unscripted.

Strowman picks the dude up, does another huge move to him, then threatens the ref if he won't count the three again.

That was a new wrinkle, but this has to be the last jobber match. The crowd is starting to turn.

Have him do this to Bo Dallas or something.

Bubba Ray Dudley is one of the must underrated talkers in the business. He's also does some of the best in-ring heel work I've ever seen.

If this is it, I'm going to miss him.

Bubba and D-Von say that they're lucky to get to go out on their own terms after 20 years in this business.

The Shining Stars come out.

They say that they're giving the Dudleys a retirement gift: Economy Class tickets to Puerto Rico.

So these guys are going to get the final 3-D in WWE history. What a fun Trivia Question and Answer for the history books.

But after a huge Get the Tables cheer, Gallows & Anderson interrupt, beat them down and give the Magic Killer to Bubba Ray on the floor.

And a Magic Killer through the table to D-Von.

Honestly, if Rusev doesn't come out and break Roman's kneecaps with a tire-iron, there is no justice in the universe.

There's some back and forth tie-up stuff until Jericho slaps Reigns across the face. Reigns hits a few clotheslines until Jericho lands a thumb to the eyes.

AFTER THESE MESSAGES WE'LL BE RIGHT BACK.

Back from the break and Jericho is taunting and answering headbutts with big dropkicks and putting Reigns in headlocks.

Reigns fights out of it and hits some clotheslines. Clotheslines in the corner, followed by a missed Superman Punch followed by a failed attempt to lock in the Walls of Jericho.

Jericho lands an Enzuigiri for a two count.

Jericho goes top rope for an axehandle, I guess, jumps off into an uppercut from Reigns, Reigns lands the Driveby kick.

Jericho's Lionsault is foiled by Reigns getting the knees up. Superman punch.

Jericho goes for a Codebreaker, but Roman gets him up into a sitout powerbomb.

Owens runs in and gets punched.

Spear countered by a rollup into a Walls of Jericho.

Reigns gets to the ropes. Gets Superkicked by Owens.

I HATE THIS MORE THAN I HATE LIMA BEANS.