SRS: What's Going On With AEW And Time Buys?

AEW is a polarizing topic before they've even held their first show, and that's to be expected. It's also expected that they'll land on TNT, if recent rumors prove true.

TNT -- the brand that was integral in the famed Monday Night Wars, home of WCW Nitro, is expected to announce All Elite Wrestling for their fall lineup at their Upfronts in May, just ahead of AEW's debut show Double or Nothing.

However, a quote from The Wrap's Tony Maglio put a damper on a lot of the optimism during an interview with 411 Mania. Accoridng to Maglio, AEW would be on the network as time buy, a far cry from the lucrative TV-money deal Dave Meltzer of Wrestling Observer had been speculating months ago.

“My understanding based on the people I’ve spoken to is that it would be more AEW paying for its time on TNT than Turner paying AEW for its show. Another very good wrestling reporter and I had been talking about whether that would be the case or whether it would be a revenue share, and we’d both heard rumblings and talked to people. Maybe a couple of months ago it might have been a little bit of a different story. But the truth is, when you’re talking to Turner, [they’re] a very well-established, very well-off company inside of gigantic parent company…it’s not the UFC. It’s not WWE, it’s not MLB. They have MLB, they have NBA. They know what they have to pay for. And I think currently, AEW has way more to prove than Turner has in terms of trying to get them to come to their networks. I think AEW needs this deal more than Turner does.”

I should probably note that I was told by a source that has provided me multiple WWE stories that Maglio was a name I should be following as it relates to the situation a couple of weeks ago.

Why does this matter? I'm not sure it really does to anyone outside of AEW. They're not a publicly traded company, and whatever method they utilize to get on television is really on them. It can, however, affect the level of advertising TNT is willing to put in. A company looking for a return on their investment is likely more motivated to promote a show they're paying out of their asses for than one paying for their own exposure.

Les More of Talking Sheet exposed what many had been discussing behind closed doors in a twitter thread Thursday night. I'm posting photos because it's a lot simpler than posting the thread itself, but go give it some love at this link. 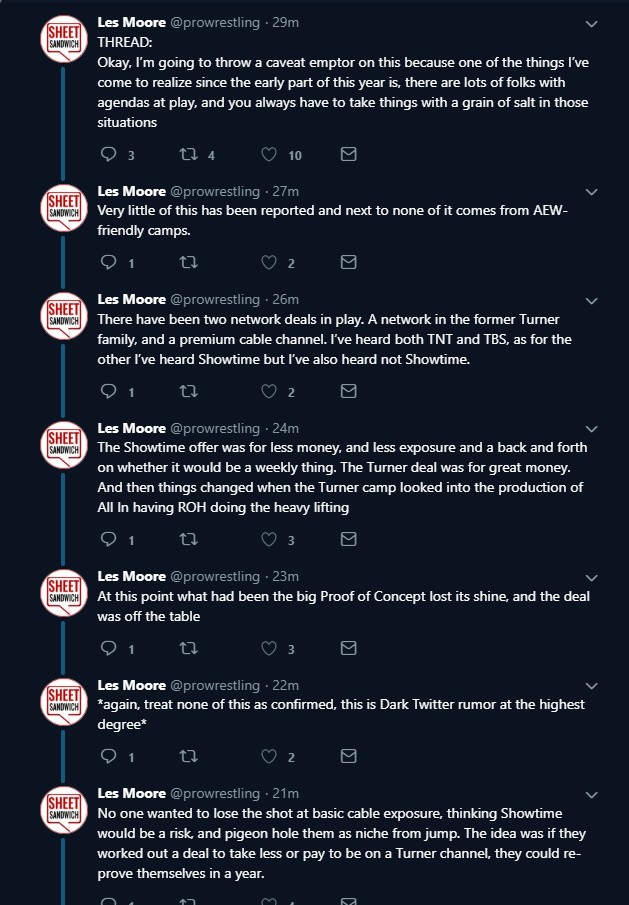 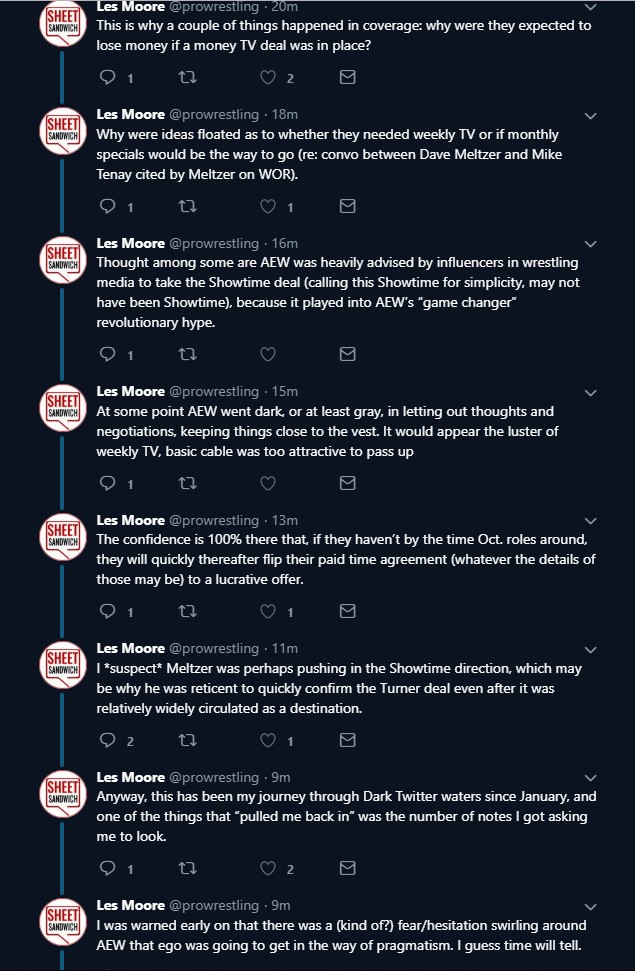 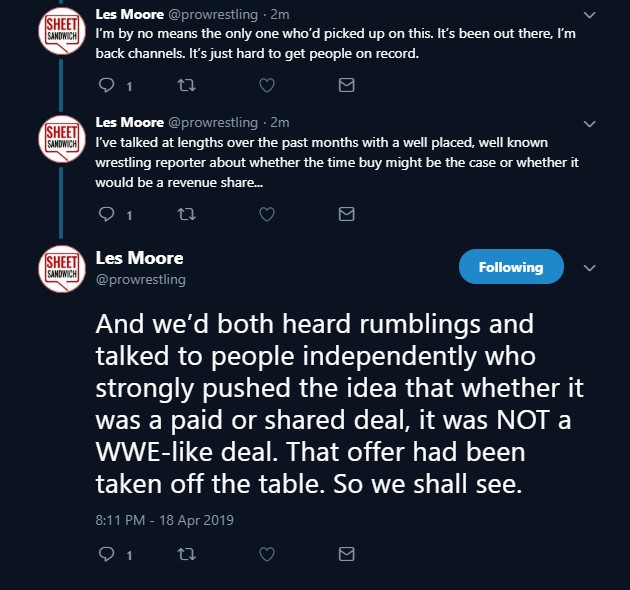 Quite frankly, the news shouldn't be that important to wrestling fans that don't have an interest in "the business behind the business." You'll either watch the show or you won't, you'll enjoy the show or you won't. However, on the social side of things, those seem few and far between. AEW is a hot topic. Their success and failures will be a hot topic and will be applauded and ridiculed as a result. We didn't have social media in the era of a perceived solid number two company with a dedicated backer. No, I'm not counting Panda Energy's TNA, or Sinclair's ROH at this stage.

The perception of being desired goes a long way to some fans and pundits. Personally, I wouldn't see the issue in an unproven television entity being required to prove their worth. However, that's very much seemed like the case -- only in reverse -- for Impact Wrestling's television property. They've went from PPV, to a time buy, to a television deal, to a barter deal, to a largely streaming deal. Accessibility is important, regardless of perception. This is something Impact is well aware of by now. That's why I personally always saw the Showtime rumors as an uphill battle. How much can you grow if nobody can see it?

I should note -- almost all of this is speculation. I haven't verified it, though I've reached out to numerous contacts at All Elite Wrestling for comment. It's not likely they'll respond, and about as likely that they even could given the nature of upcoming announcements and deals.

Dave Meltzer followed up all of this Thursday night with a post on his F4W Board stating "One hour is false. Time buy is false. It's the exact opposite. Look at sports rights, Bellator, Matchroom, UFC on ESPN, people are offering tons of money both for weekly live programming and also to get their streaming services starting. That's the reason this thing is starting this year. One of the reasons the deal hasn't been signed yet is because of multiple bidders."

He's not wrong. UFC, Bellator, WWE, Matchroom -- even individual athletes like GGG and Canelo are signing huge deals with distributors. However, AEW isn't proven as a television entity. They have some great names, a degree of star power, a fantastic digital reach and the ability to draw for at least a major event. PBC comes to mind as a new entity that was able to broker deals with various networks before landing deals with Showtime, Fox, and others.

After all that, I should probably note that multiple All Elite Wrestling sources denied the time buy rumors in rather colorful fashion in the wee hours of Friday morning.

Thorughout the last few weeks, I've gained insight is from the Ring of Honor side. At least two people that I spoke to within Ring of Honor didn't really expect All In to succeed to the level that it did on the back of the now-All Elite Wrestling talent. Some within the company suggested ROH's willingness to help with that show was under the suspicion that it wouldn't work out so well, those involved would see the grass wasn't so green, and realize they'd need the company's help. There were also that suggested ROH extend those talents' deals through the MSG show as a trade-off for the company helping out -- something that didn't happen. But hey, at least ROH has the rights to the All In footage.

That's where the proof of concept comes into play.

By all indications, All Elite Wrestling will be on television this fall. We'll find out if they sink or swim, and as much fun as it is to talk about the lead up, the proof will be in the content of the show and whether or not fans take to it.

Note: This content of this story is opinion unless otherwise noted.