Welcome to A-Train's
Preview & Predictions for

AKA BRAND PRIDE IS A FANTASY

And what the hell, there's also a little
Uncooked Raw Reaction
& a smattering of
SmackDown React-Down in here, too.

Let's get right to it.

First, why is this damn thing so long?

I don't mean this column, though I admit it's not exactly brief.

No, I'm referring to the PPV.

The actual event is Four Hours Long, but there are only Six Matches.

Rounding it off, that's THREE HOURS for THREE MATCHES.

And there's a Two Hour Pre-Show, but no matches scheduled for it.

That's a lot of video packages and Shucky Ducky Quack Quack Moments of the Night if they've got to fill two hours with no matches. How many times is Renee Young going to throw it over to Tom Phillips in the Social Media Lounge? Is Dasha Fuentes going to do an in-depth interview with James Ellis?

Second, and most importantly:

Brand Pride, Brand Loyalty, whatever you want to call it, is a damned, dirty, disgusting lie.

It is a pile of fetid bullshit sitting on a upon a throne of lies.

1.) "Fantasy Warfare" and the process of it "just getting real."

2.) That the idea of Brand Pride reigns supreme.

My god, this is stupid.

The authority figures put a bunch of guys (and gals) together who pretty much hate each other on their respective teams. In some cases, the teams contain various combinations of people who have been feuding for months (AJ & Dean and KO & Seth and Becky & Alexa and Nikki & Carmella and Sasha & Charlotte and Bayley & Charlotte). Each men's team also includes combinations of people who have hated each other for years (Seth & Roman and Bray & Dean). Great job choosing teams, people in charge. Team Raw also includes a Grizzly Bear that someone shaved from the neck down and taught how to hate. So that dude's reliable. No wild card there. Team Smackdown includes a crazy swamp-preacher who believes he's a God and may or may not have brainwashed the most dangerous, most unpredictable dude on the entire roster, a guy who HEARS LITERAL VOICES IN HIS HEAD (WE KNOW THIS BECAUSE THE ENTRANCE THEME TELLS US SO), the swamp-preacher has brainwashed this dangerously insane man into doing whatever the swamp-preacher says. Also he may have brainwashed him into having glowing eyes, like Lion-O.

Oh yeah, and that guy with the dangerousness and the unpredictability and the glowing Thundercat eyes, that guy's also on your team. And he and the swamp-preacher, they just want to watch the world burn.

THIS IS ALL HIGHLY COMBUSTIBLE.

Now, the past several weeks have shown us just how combustible this all is. Highly. I just said that.

But how highly? As high as it gets. The top 5 Raw guys have been at each other's throats since the minute they were named to the freaking team. And on Smackdown, the only truly consistent story since the second week of September is that AJ Styles and Dean Ambrose wouldn't piss on the other guy if he was on fire.

So then Daniel Bryan, I guess through telepathy, called the rest of Team Smackdown into the ring.

They traded barbs back and forth, Owens and AJ arguing over who's the better champ and over who is sucking on Jericho's SUGAR TIT which is a phrase I never thought I'd hear on WWE PG, and Bray says Braun deserted him, turned his back on him when really he was just drafted to a different show and isn't at fault at all, and I guess Orton is jealous of Bray's former protege and I guess Seth and Roman are buddies now because VINCE MCMAHON SHOULD NOT BE ALLOWED TO MAKE CREATIVE DECISIONS UNTIL WE CAN CHECK HIM FOR DEMENTIA and Shane-O Mac is a crazy person who believes he belongs in this match because I don't think he's going to be truly happy until he literally dies in front of his children.

They do all this standing in lines, shoulder to shoulder with their teammates looking at the opposition like they're Jets and the Sharks, and they're waiting for the orchestra to strike up the band so they can start dance fighting.

Also James Ellsworth is there for some reason.

This doesn't make a lick of sense.

There's no reason for these men who have been inflicting bodily harm on one another to put aside those differences and fight together.

There's no incentive for them to do so. They've been selected by their superiors to fight each other, pitted against one another like Roman Gladiators, servants fighting for no other reason than to please their masters, a brother and a sister who just want to prove to daddy that they can pick the very best fighting men, right daddy? Right? Tell me how good I am at picking the fighting men, daddy. I''m so ever much better at choosing an army than my brother is, aren't I daddy? Please love me daddy. LOVE ME!

Okay, maybe that's taking it a bit too far, but this whole thing just feels wrong.

Dean Ambrose and AJ Styles HATE EACH OTHER. It's been established for months. They shouldn't be willing to breathe the same air as one another unless they are allowed to try to murder each other. 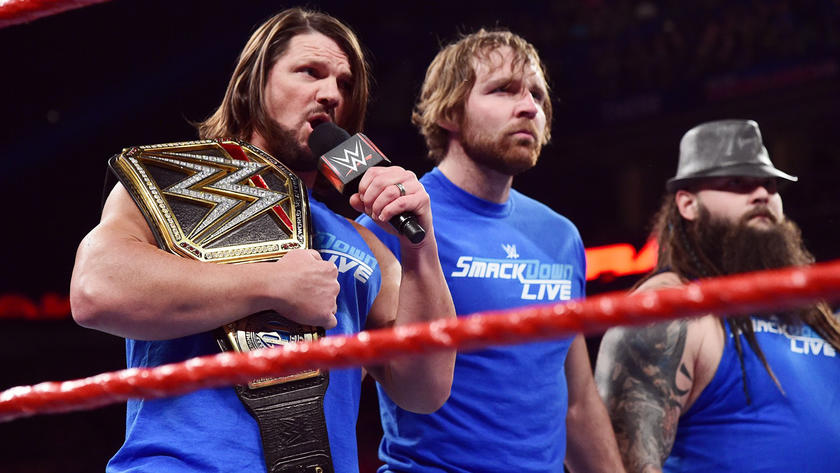 And yet, here they are, on the same side, wearing matching blue t-shirts like they're in a GODDAMN SLOW PITCH SOFTBALL LEAGUE.

Why should Bray Wyatt care if Smackdown beats Raw? What does he get out of it? Why should Roman Reigns put aside his differences with Jericho and Owens and fight alongside them? To what end?

I know there was a veiled threat by Stephanie that if they don't win, she'll fire the whole team, but that's just a bunch of spoiled rich girl bluster, and her team should know that.

What's missing from this whole thing is STAKES. Each man should get something if he survives the match. A title shot. Choose your entry number in the Royal Rumble. A hefty increase in his Christmas Bonus Check so he can finally put in that swimming pool.

INSTEAD EVERYONE GETS A MEMBERSHIP IN THE JELLY OF THE MONTH CLUB.

And yes, before you say it, I know it's the gift that keeps on giving the whole year. Everyone knows that.

But still, where is the incentive? Utterly absent.

The only guy who had the right idea about this whole thing from the start was Baron Corbin; what's in it for me, he said, but then he slipped on a banana peel and got kicked off the team.

I wonder if we can come up with something for him to do after he gets back from injury ...

Exclusives
We Asked Kenny Omega To Say Nice Things About AEW Wrestlers, Here's What He Said
Kenny Omega Talks Retirement, Thought He Was Going To Have To In 2015
Update On Arturo Ruas, Original Plans In WWE
Backstage Notes From IMPACT Wrestling's Most Recent Tapings
More On Zelina Being Denied Meeting With Vince McMahon Following Firing