OFF-TRACK: Enzo Amore Really Is A Dick, And His Driver's License Proves It Longtime readers of my work here at Fightul, as well as listeners to the podcast, will recall that I believe Enzo Amore to be a dick. Just a ridiculous butthole of a human being.

You might remember that he was taking a shower at RAW last year, then had his towel and clothes stolen and was locked out of the locker room, thus forcing him to wander around the backstage area totally nude (and heavily pixelated). And because this is the WWE and Enzo Amore was a babyface at the time, he felt free to sidle up to married woman Lana and proposition her with a sly head nod and a "How you doin?" If you don't remember, take a trip down memory lane with me:

This, of course, led to Enzo being beaten to death by Rusev in a hotel room (the happiest of all Rusev Days).

Then, more recently, Enzo forced his lackey Drew "Gabba" Gulak to beat up his other lackey Tony "Tony" Nese--who just so happens to be Gulak's in canon best friend.

Total dick moves, a year apart, without regard for whether or not he is a good guy or a bad guy. The one constant is his dickishness.

This is his character, mind you, not the guy himself, of course. But he certainly does have some stuff in his past (getting kicked off tour buses, banned from locker rooms, etc.) that would lead one to assume that the dickishness of fake dude "Enzo Amore" is based heavily on the dickishness of real dude Eric Anthony Arndt.

Enzo Amore is a dick.

As he says, the signature really does say "E.A." The penis is the "A" and the testicles comprise the "E."

So technically, this might be considered an actual signature.

However, it's a dick and balls.

Like, this dude, Eric Arndt, not Enzo Amore, this real person, a grown man in his thirties, drew a dick and balls on his official Delaware State Driver's License in place of his signature. And he somehow thought a State Government entity would have a sense of humor about such things.

In the video, he says so himself, he's really busy. He tours all over America several days a week, just got back from a trip to Abu Dhabi, he doesn't have a lot of time to go into the DMV and argue with some Government Employee about whether THIS is or is not a drawing of an erect shaft and nutsack: 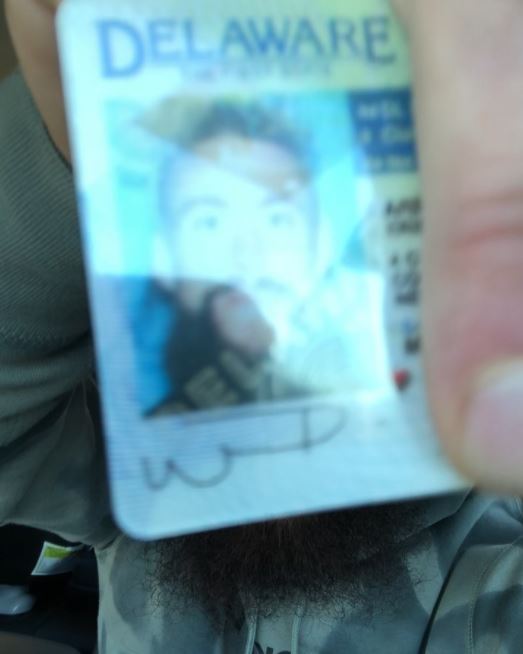 (For the record, it most certainly IS.)

So Enzo is not only a dick, he's a stupid dick.

But this is what makes Enzo "Enzo" and that's kind of why we love him.

And so now we wait patiently for Nia Jax to hit him with the swerve and beat him down like the dog he is.

Like the stupid dickish dog that he so clearly is.

I mean, it says so right on his Driver's License.