Yesterday, famous old horndog wrestler Ric Flair, who once told a story about how he had sexual relations with all of the stewardesses on a flight in midair, then got the WWE to turn that story into a cartoon ... 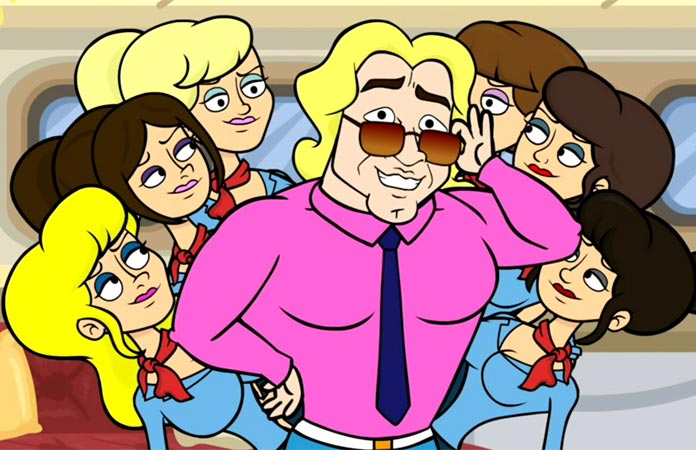 ... it came out yesterday that the real-life version of that cartoon guy had said in his upcoming documentary "Nature Boy", on the record, that he had slept with 10,000 women.

The documentary has yet to air, but Naitch still feels bad about what he said, not because it isn't true, but because he's worried what his grandkids will think when they realize that not all of those 10,000 women are their grandma.

Now, in case you were wondering how the math works out on 10,000 women, if we give Flair the benefit of the doubt and say that he lost his virginity at age 15, he'd have to have bedded an average of 3.6 women a week between now and then.

"Big deal," you say. "The cartoon told me he had sex with SIX during a single afternoon flight."

Well, there's another doubter out there, and he seems like he would know what he's talking about.

He brings up a good point: "You still have to go to school, eat, sleep..." And then Ron Jeremy does an impression of a guy humping someone while asking someone else to pass the potatoes or something. It's really quite droll. You should watch the video.

What Jeremy seems to be intimating is that, much like how Hulk Hogan has a 10-inch penis but Terry Bollea does not, Ric Flair might have had sex with 10,000 women, but for Richard Fliehr, the number is almost certainly much lower.