Lucha Underground is an acquired taste. I understand this. But personally, I think it tastes GOOD.

I love it, and so do a lot of other people. And some people hate it. And even more people have never seen it. The network it’s on, El Rey, is From Dusk Till Dawn director Robert Rodriguez’s personal video playlist of subtitled 70s WuShu films and schlocky grindhouse horror flicks, seasoned liberally with mini-marathons of KnightRider and Miami Vice. El Rey is only available in about 38 million homes. To put that in perspective, USA (and by extension, RAW and Smackdown) is in 81 million homes. Hell, even TNA on PopTV is available in 50 million. A lot of the people who might want to watch it, can’t.

It’s also available on some streaming services, most notably Sling TV, and you can buy individual episodes on iTunes, so there’s a potentially bigger audience out there at this point, but still, only around 300,000 sets of eyes are tuned into Ultima Lucha each week.

If you haven’t seen it, allow me to briefly explain.

It’s a wrestling show. But it’s also a (mostly) English Language sci-fi telenovela. It’s literally batshit. There’s a guy who’s a literal time-traveling Aztec god with rocket boots and he’s best buds with a dude who is the literal reincarnation of a literal dragon. And that’s nothing.

Ricochet (half of the match that ruined wrestling for Vader) plays Prince Puma. He is possessed by the spirit of the God of the Jungle Cats. Literally. Sometimes he growls and it sounds AWESOME. He was the first LU Champion. He has a face vs face rivalry going on with Rey Mysterio. Yes, THAT Rey Mysterio.

There are three monster hosses on the roster. One of them, They Call Him Cage, may or may not be a cyborg of some sort, like a T-800 model that someone has programmed to occasionally do moonsaults. Another of them, Mil Muertes, is the literal embodiment of death—he was killed as a boy in a terrible earthquake in Mexico city, then brought back from the dead by a witch (? Female necromancer?) at least like 5 times. The third hoss, Matanza, is like a splatterhouse villain, wearing a sleeveless mechanic’s jumpsuit and some kind of Bane Mask. Back in season one he ate a guy. And I am not kidding.

Matanza, the cannibalistic carburetor repairman, he is the half God kid brother of the Vince McMahon of this show, Dario Cueto. Dario Cueto loves violence. That is why he has turned this warehouse in Boyle Heights, East LA, into his own personal Kumite, which he calls “The Temple”. Dario Cueto is the greatest thing on television.

Or, he sucks balls, depending on who you talk to on the internet.

If you’re one of those people, I might never convert you into loving this utterly unique beast. But if you’ve got an open mind, an open heart, and you think you might enjoy seeing crazy talented wrestlers do crazy amazing things in the ring at the behest of a crazy crazy Spanish millionaire with a Rob Zombie fever-dream for a brother, then follow me down the rabbit hole. 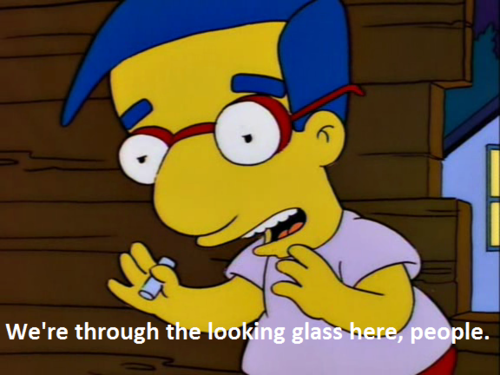 You’ve come at a great time. Tonight is the second of three episodes that comprise the season-ending Wrestlemania of Lucha Underground, Ultima Lucha Dos. They tape everything way in advance (they just taped Ultima Lucha 3 like a week and a half ago, and they may not air that thing until this time next year), so they are able to cobble together stories that make a lot more sense than those in WWE. I mean, as much sense as a nunchuk battle in a men’s room can “make sense.” I just mean that everybody has a reason for why they fight each other, and those reasons are brought to light in backstage vignettes that are shot like a low-budget arthouse Mexican thriller. Anything that happens in these backstage vignettes is unknown to the crowd at the time of the tapings, and it is (kayfabe?) unknown to the announcers. Seriously, like six weeks ago, one of the Zombie Hoss’s three minions literally pulled the hearts out of the other two henchmen, but it happened backstage, so the announcers are like “Wonder what happened to Sinestro De La Muerte’s Trios Partners? ¯\_(ツ)_/¯ Guess they must have just gone home.”

(Yes, his name really is “Sinestro De La Muerte” and if you’re like “Yeah. Totally. That checks out,” then you are the target audience for this product.)

Oh by the way, since Lucha Underground is taped, Spoilers abound all over the internet, so tread carefully. Here at Fightful, we don't truck in any of that nonsense.

First of all, click here to see the best match in its entirety.

Second of all, nothing that happened last week has any bearing on what's happening this week.

So here we go: First up is The Gift of the Gods Championship.

This time, it's these people:

That silhoutte there on the right, is a dude named NightClaw. He dresses like a big black kitty cat. We know this because we saw one of those backstage vignettes in Dario Cueto's office. The announcer team never saw that vignette, so they think it's a "MYSTERY OPPONENT."

From right, we have Killshot, a former special ops soldier,

Mariposa, a dark-butterfly-themed luchadora with a Hannibal Lecter Mask, her brother--Marty "The Moth Martinez--who is legit the creepiest creep that ever creeped,

Sinestro De La Muerte, who's got a bit of a Mola Ram in the Temple of Doom fetish,

Daga, a generically athletic luchador who is being stalked by a snake lady, and Sexy Star, the Queen of Lucha Underground.

Killshot hates Marty, because Marty stole Killshot's dog tags (the ones that once belonged to his fallen brothers-in-arms). Sex Star hates Marty and Mariposa because at the end of last season, Marty kidnapped her, and he and Mariposa psychologically tormented her until she managed to make her daring escape. Sexy Star beat Mariposa in an I Quit "No Mas" match to end the feud, but there's still some bad blood there.

Yeah, there's something else you should know about Lucha Underground. They have Death Matches.

Somebody might actually die tonight. I mean, in kayfabe, but still.

Here's what you need to know: Mil Muertes (the zombie hoss) started season 2 as the LU Champion, sitting on a Throne of Skulls. That isn't a joke. 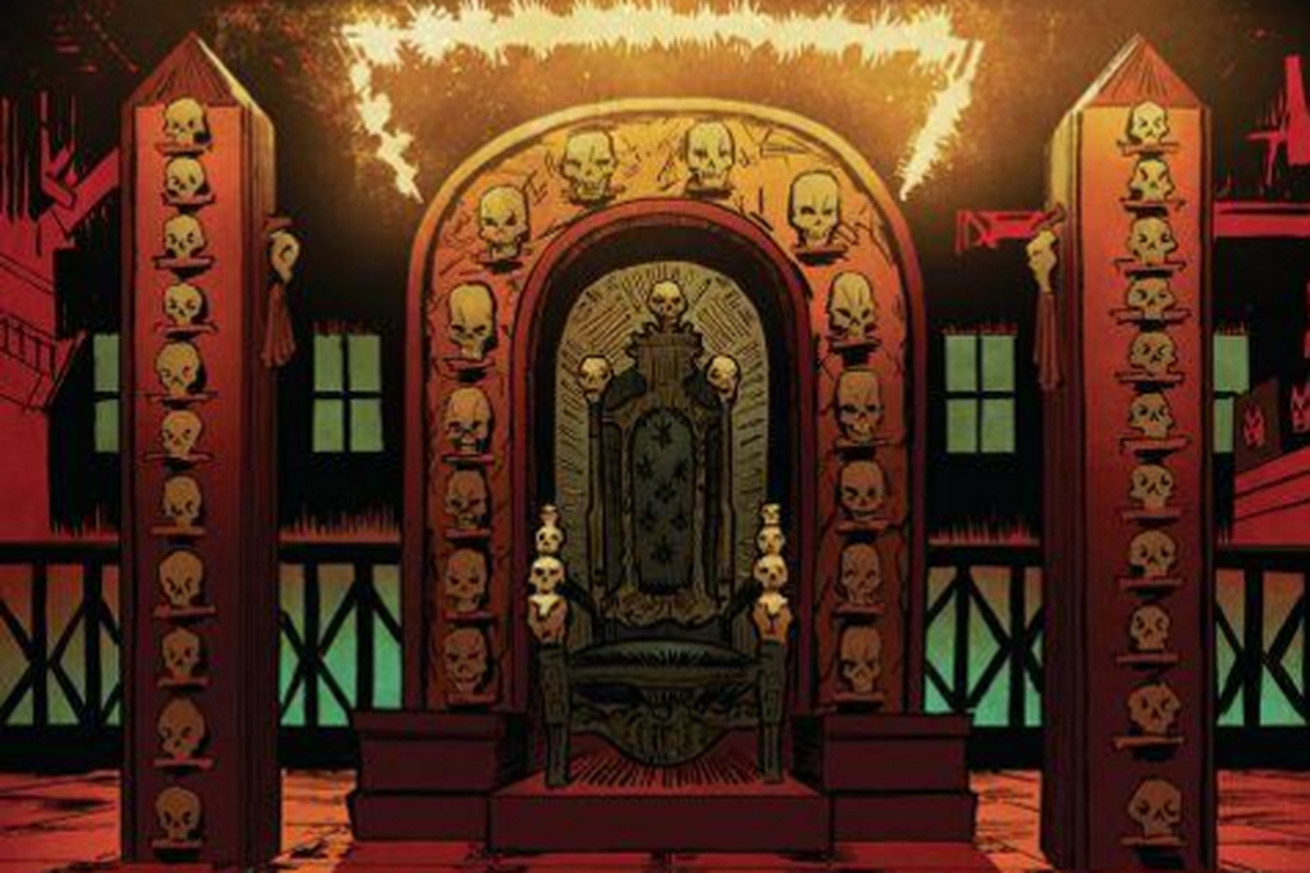 Okay, those are just artist's renderings, but it looks even cooler in reality. 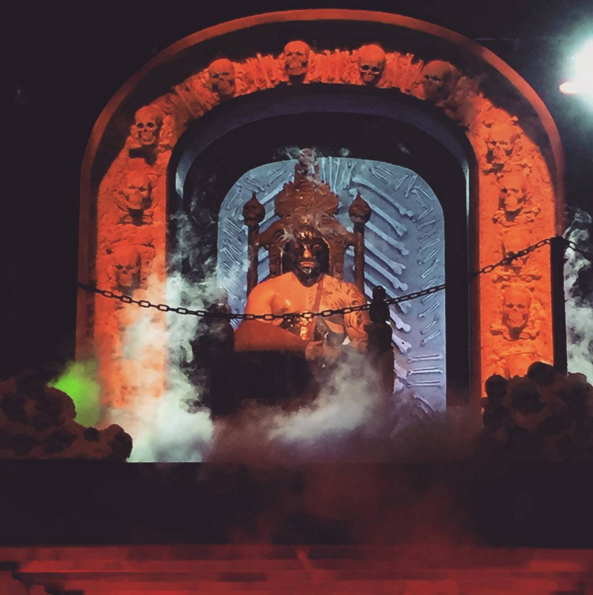 Mil Muertes lost the Championship at Aztec Warfare, which is LU's version of The Royal Rumble, except you have to pin a guy to eliminate him (or her). He feuded with the new champ, Matanza (splatterhouse mechanic hoss) and finally lost in a Grave Consequences match. That's you generic, run of the mill coffin match, except if you get put in the coffin, you actually die.

Mil Muertes lost, and died (again) and he corpse wound up in the custody of King Cuerno, who stuffed and mounted him in his trophy room. "Cuerno" means "Hunter" in Spanish, and good thing, too, otherwise it would look out of place when this guy wears an entire deer carcass to the ring.

Anyway, Mil Muertes came back to life (again) attacked King Cuerno and got him eliminated from the Six To Survive match for the #1 Contendership. King Cuerno won the grudge match the next week with a lucky roll-up. Now it's personal. If it wasn't personal before.

Here are a few gifs of him murdering Prince Puma.

That Flatliner from the top rope is how he won the title, actually.

But as great as Mil Muertes is, I'm not sure that King Cuerno isn't a little bit better.

For instance, he does this thing called "The Arrow From The Depths of Hell."

It's basically just the most amazing Suicide Dive you'll ever see, and it NEVER GETS OLD.

I mean, I'm pretty sure Mil Muertes wins, but King Cuerno signed something like a 7 year contract, so I don't think they're kayfabe killing him off either.

No matter what happens, tonight is gonna be.

Follow me on Twitter @pawlowskithe4th to see the results as they happen, keep an eye on the Live Blog, and come back tonight to see my full reaction.