Previously on the "U.C.": Raw took all the momentum from the Swerve of the Decade and straightened it out. Safety first, you know. 10 and 2. Check your mirrors, check your blindspot. 10 and 2. More of the same stuff we'd been used to. 10 and 2.

Oh, except for a fake retirement speech that wasn't at all in poor taste. Except for that.

This week, though? Raw gets a ticket for reckless driving. SWERVES ALL OVER THE PLACE.

Well, maybe not swerves, but definitely veering into oncoming traffic a few times.

This metaphor is getting stretched pretty thin, so let's just do this.

We're going to tackle all the different strands of the main event picture as a whole.

Give the Kevin Owens Show an Emmy.

These two guys never even interact on the show, and they're still great together.

Watch that video up there again. Owens is such a great natural heel, so smooth and confident, it doesn't even look like he's trying.

And Jericho, so bound up and tense, trying to be cool while fuming smoke out of his nose, is a great counterpart.

And as much as I hate Tom Phillips, I have to admit, he does a very good job with these interviews. I also like watching Jeri-KO make fun of him.

The scuttlebutt is that Phil Philbin got all of his competition fired through backroom politicking, and one of those casualties, Rich Brennan, was far superior at commentary on NXT, Main Event and Superstars. 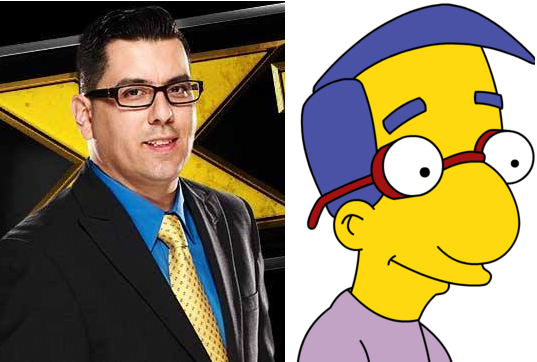 They had a great rapport, and sometimes I get sad thinking of all the fun that we're missing out on without Milhouse interviewing Champion of the Universe Kevin Owens.

That is just fantastic STUPENDOUS.

Kevin Owens is fantastic the greatest interview subject in the history of WWE.

Doesn't matter who he's talking to:

Bring back Mean Gene for one week, just for one of these.
I want it.

Can we talk about how great it is to see Seth Rollins acting like a person who understands his motivations?

He feels as though he was wronged by Stephanie and Triple H, understands maybe for the first time that those people he chose to run with are actually backstabbing a-holes, and he's pissed about it. But part of him feels foolish, for not realizing it sooner.

So what does he do? He deflects, calling Mick Foley a fool for trusting Stephanie. It's Psychology 101, but that doesn't mean it doesn't ring true.

This interaction between Foley and Rollins is really great, by the way, and it sets up a Rollins/Owens moment for later in the night that is just outstanding.

EVERYTHING ABOUT THIS IS JUST.

Now, both of these guys are basically sh*theads. Even Rollins, though he has babyface motivations, is still too selfish and obnoxious to not be a heel.

Great work by him here.

And then Owens just ETHERS Rollins, first with the "Roman did all the work and then you snuck in and got the glory" comment, and then with his statement about how Triple H finally realized he'd been backing the wrong horse this whole time and switched over to Owens.

My favorite part, though, is where kindly old hobo Mick Foley wanders in and gets Owens to back off, because it looks like Rollins is about to cry.

Owens walking off while doing his best impression of Rollins' "super annoying" laugh, is just so choice, too.

The Big Dog vs The Big Frog.

Great great great match. Owens absolutely belongs in the ring with Vince's Top Guy. They have a great chemistry together, Roman got to look strong, Owens got to shine as a heel. As good as could have been expected.

One note: Owens Frog Splash from the top rope is one of the best looking, most savage moves in the sport, and it should be unkickoutable. 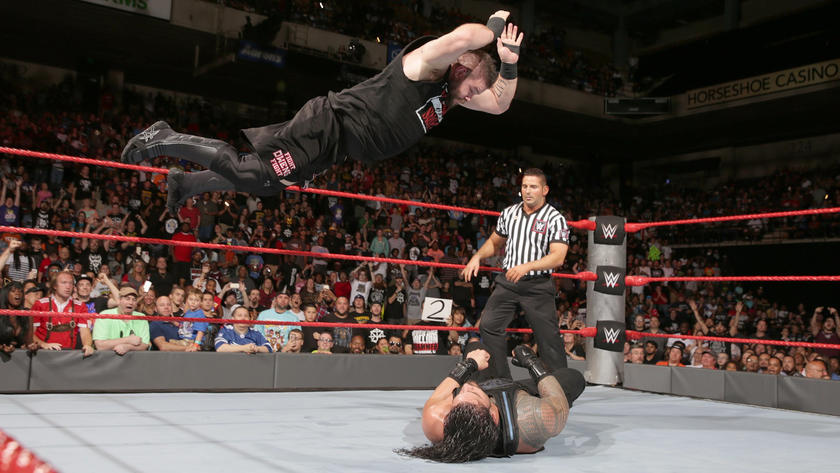 If Roman wasn't wearing that totally-illegal body armor,
I think he might have died from two collapsed lungs and a liquefied heart.

Also, this thing too:

No one should get up from that either.

I should mention that despite all of Foley's warnings, Rollins just had to come down to the ring and attack Owens, getting Reigns disqualified and eliminating him from the Triple Threat.

Of course, as we know, there are going to be consequences for Seth. We're not sure what they're going to be just yet, but I have a hunch Seth won't like it too much.

After Seth gets sent to the back and Mick restarts the match, another man interferes, causing a distraction that costs Roman the match.

And finally, the love-hating, wedding-destroying Roman Reigns gets his comeuppance.

Watch that video. Even if you watched it when it happened, watch it again.

She's been planning her revenge for over a month. And now ... 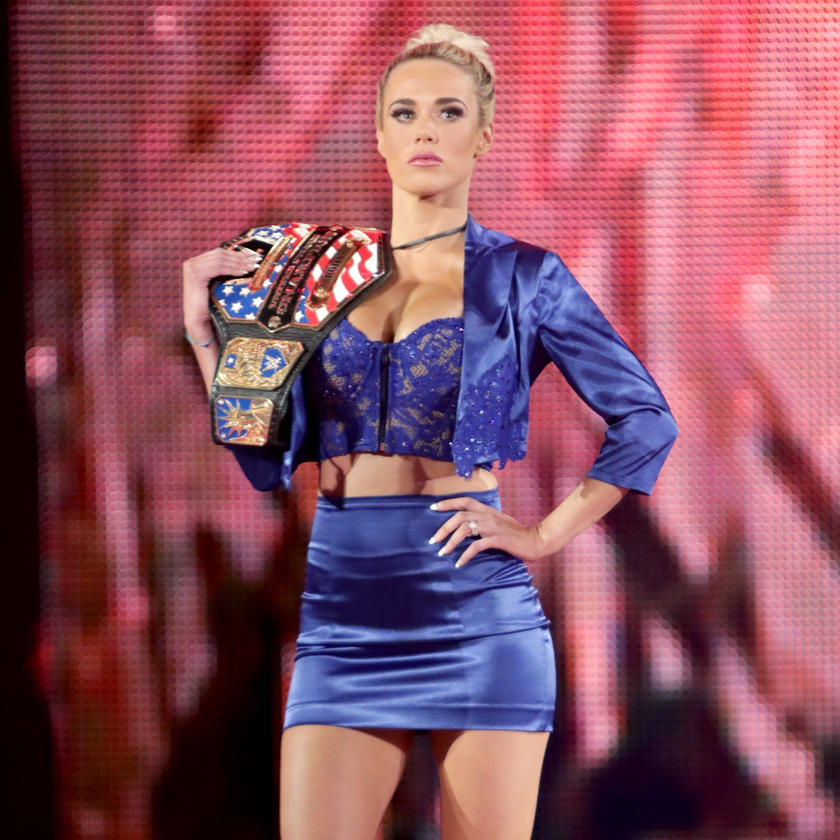 I love when The 'E remembers to carry a story through over time to it's logical conclusion.

Chapter 1: Roman puts his nose where it's not wanted, asks for a US Title Match, to which Rusev responds ...

And with good cause. Roman doesn't deserve a title shot, Rusev has no obligation to grant him one.

Roman knocks Rusev into Lana, Lana gets cake all over her wedding dress (see the above video).

Chapter 2: Because babyfaces can get a championship match just because they want one, Mick Foley puts Roman Reigns in a match with Rusev for Summerslam.

Chapter 3: Rusev is upset by this, and throws a fit the next week on Raw, threatening to leave for Smackdown.

Roman Reigns comes out and insults him some more, because that is what babyfaces do.

Mick Foley makes a Main Event for that night, Roman vs Rusev for Lana's Honor.

Roman wins, because of course he does.

Rusev and Roman go after each other before the bell, Roman getting the better of the situation by attacking Rusev's ribs with a steel chair.

The match is called off, and as an injured Rusev is hobbling up the ramp,
Roman runs down and delivers a huge spear to Rusev's already injured midsection,
because Roman Reigns is a psychopath.

Chapter 5: The following night on Raw, Rusev is entered into a SERIES OF MATCHES to determine who will become the new Universal Champion now that Finn Balor has been injured.

Because of the rib injuries Rusev sustained at the hands of Roman Reigns, he is forced to take a count-out loss to Big Cass, rather than risk further, possibly catastrophic injury.

Even though it was the smart decision, it had to have been embarrassing for Rusev.

And Roman Reigns was to blame.

What will Chapter 7 be? Probably Roman winning the US Title at Clash of Champions, so Boo to that, but still. Longform storytelling. Gotta love it.

All in all, the Kevin Owens Show was pretty excellent this week.

Can you hear me now?

Yeah, pretty much everything Jericho is doing at this point is Gold. Gold Plated Gold with a coat of Gold Paint.

There's an tremendous moment when Sami Zayn says that the reason he started wrestling, traveling all over the world to try to make himself better was because of guys like Chris Jericho. "Where's that guy?," asks Sami. "What happened to that guy? Now you're just Kevin Owens' bitch." To which Jericho pulls this face:

He then sucker punches Sami with his phone. You think that's covered by Apple Care?

Or maybe his two year plan was ending and he was going to get a new phone anyway. Is he getting an advance prototype of the iPhone 7?

One thing's for sure. Chris Jericho definitely thinks headphone jacks are for stupid idiots.

The match between these two at CofC should be pretty brilliant. Looking forward to it.

Double-Pin! It's Two Pins in One!

Okay, so here's the thing: After a pretty great opening segment where Sasha and Bayley stop being polite and start getting real, Charlotte gets to be just the most awful human being on earth, and Dana Brooke gets to finally stand up for herself, even if it's just for a second...

Then they have the match, to determine who's going to face Charlotte at Clash of Champions. Sasha because she's got a rematch, Bayley because she pinned Charlotte clean last week, and Dana because ... because she slapped Charlotte, I guess?

The match is actually quite good, and Dana doesn't ruin it.

But the end is wonky.

Years of watching wrestling has told me that's a double pin.
But apparently it's not.

Bayley even Tweeted saying that Sasha was better tonight and she'll be rooting for her at Clash of Champions or something.

Maybe Charlotte will bring it up next week, showing the video and saying that now NOBODY is the #1 Contender because they pinned each other.

But I doubt it. Doesn't matter though. Because no matter who wins the belt at Clash of Champions, they're just keeping it warm for ...

You tell me who's beating that. Seriously. With the way she's being built up, who has a chance?

This isn't the same Nia who got Guillotine Choked out by Bayley last December.

It's not even the same Nia who got her head kicked off her shoulders by Asuka in June.

This is a different Nia. And she's my favorite thing in wrestling right now.

I'm including this with the Ups if only because there's still hope that I can see Bo Dallas join forces with this Gentleman.

Bo can teach Braun how to write poetry.

"Roses are Red / Violets are Blue / Puppies are Soft / Now me squash you!"

"Two roads diverged in a wood, and I, I SMASH THE ROADS AND MAKE IT ONE ROAD AGAIN."

"Shall I compare thee to a summer's day? / RRAAAAAAAAAHHHHHHHRRRR!"

Why do we even have rules?

Seriously, if Sheamus had put his foot on the ropes to pin Cesaro, Michael Cole would have clucked his tongue in disapproval and Byron Saxton would have had a damn aneurysm.

So even if Cesaro is the babyface, and he just did it to stay alive in the Best of Seven, and he wouldn't have resorted to cheating if his bad back wasn't failing him, it's still against the rules. It's still cheating.

If the good guys don't respect the rules of the match, then why have rules at all?

Can we skip Match 6 and go straight to Match 7, please?, k thanks.

The New Day came out to say that everyone involved is very sorry for the Old Day sketch.

Gotta respect them for owning up to the mistakes of the creative team. Shows they can learn from their mistakes.

However, then they had a match, and now they have something else to apologize for.

I can't help but compare the Raw Tag Division to the scene on Smackdown.

I care about Heath & Rhyno. I don't about anyone on Raw.

If you told me even a couple months ago that I'd be kind of over the New Day as champs, I'd have said you were crazy.

And I don't really need to see The Club with the titles either.

Somehow they've made Enzo & Cass into something I dread seeing every week.

I used to LOVE these guys.

Maybe it's that Shining Star stink they've got on them right now.

At least, I hope that's it.

Please let that be it. I think I could actually care about Enzo & Cass as Tag Champs.

Until Next Time, I've Been Alex Pawlowski
and this is me watching Rusev beat up Reigns.

*Note: I will discuss the Jack Swagger stuff from Raw in my Smackdown Reaction piece.
(I didn't forget.)
(Okay maybe I did.)