Two huge names are returning to WWE Raw, at least for one night.

The Undertaker and "HBK" Shawn Michaels have been announced for the January 9th WWE RAW from The Smoothie King Center in New Orleans, Louisiana.

Neither performer is being advertised for that date on WWE.com or the arena's website, but some fans in the New Orleans area have seen this localized ad pop up on their Facebook feed. 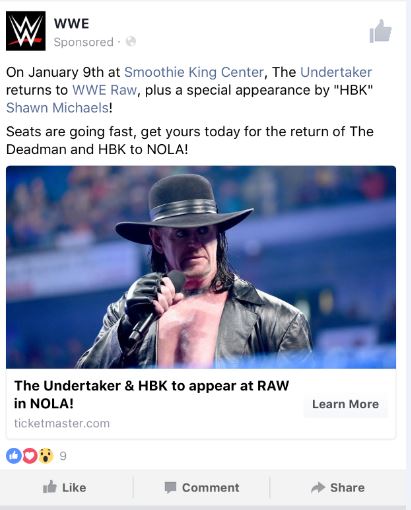 As you can see from the screenshot, this is being billed as Taker's "return" to RAW. This is curious, since just six weeks ago, on the "Smackdown 900" episode, the go-home show before Survivor Series, Taker returned to the blue brand and said "Smackdown has always been my home."

Will this be a one time only appearance on Monday night, or is The Dead Man staying on Team Red for good?

Shawn Michaels meanwhile, according to the Facebook ad, is simply making "a special appearance." He does have a new movie coming out on January 20th, the faith-based drama "The Resurrection of Gavin Stone," so it's possible this appearance might be to promote the release of the film.

We'll keep you updated with any new information.