During WWE's first quarter conference call on Monday, which they consider a huge success. WWE Network subscriptions, among other numbers, were released.

WWE Network subscriptions (both paid and free) saw a 9% jump over the day after WrestleMania 33, and ended at 1,808,000 paid, and 2,124,000 total. This marks the first time WWE has reported over 2 million subscribers on their service.

You can see the press release from WWE below

“We expect to deliver record subscriber levels, revenue and Adjusted OIBDA in 2018,” said George Barrios, WWE Co-President. “WWE Network’s continued growth along with our massive reach across traditional television as well as digital and social platforms, reaffirms the effectiveness of our global, multi-platform content strategy.”

WrestleMania broke the record for the Mercedes-Benz Superdome’s highest grossing entertainment event at $14.1 million, as a sold-out crowd of 78,133 fans from all 50 states and 67 countries attended the event. As part of the week-long WrestleMania celebration, WWE hosts five consecutive nights of events at the Superdome and the Smoothie King Center

WWE Network subscribers viewed 25.2 million hours during WrestleMania Week or 14 hours per subscriber during the week. This compares to 22.5 million hours last year, a 12% year-over-year increase

During the first quarter 2018, the Company realized stronger than anticipated performance. As a result, the Company expects Q1 Adjusted OIBDA of at least $30 million (subject to the completion of its quarterly close process), exceeding its previous guidance of $23 million to $27 million.4

Q2 2018: If the acquisition and retention of subscribers driven by WrestleMania is comparable to the subscriber activity associated with the prior year event, average paid subscribers for the second quarter 2018 would be approximately 1.77 million, representing an increase of approximately 8% from the second quarter 2017.5 As future subscriber performance may differ from prior activity, this range is provided for perspective rather than as guidance.

2018: WWE management continues to expect the Company to achieve another year of record revenue and has raised its target for 2018 Adjusted OIBDA to at least $145 million (excluding stock-based compensation expense), which would be an all-time record, exceeding its previous guidance of at least $140 million.4

Below is a look at the growth (and at times decline) of WWE Network's paid subscriber base since launching back in 2014. 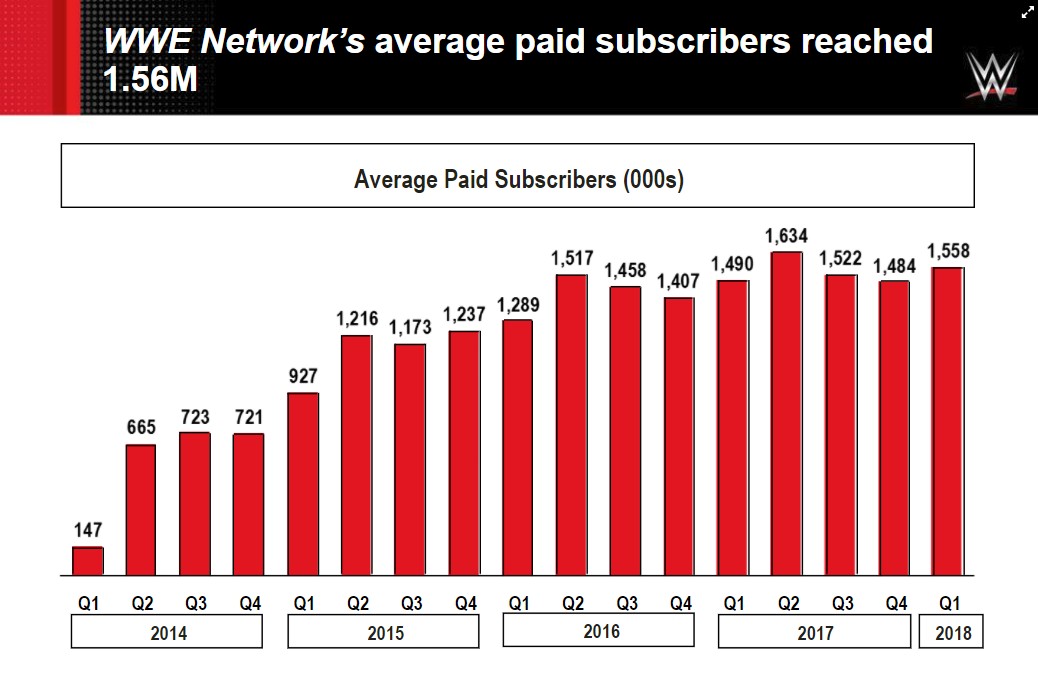