WWE officials are said to be interested in bringing current TNA star Eli Drake back into the fold, according to The Wrestling Observer Newsletter. Drake, whose real name is Shaun Ricker, worked a few dark matches back in 2006 and 2008, and was eventually signed to the WWE Performance Center in May 2013. He made it to NXT, performing as Slate Randall, but was later released in August 2014. 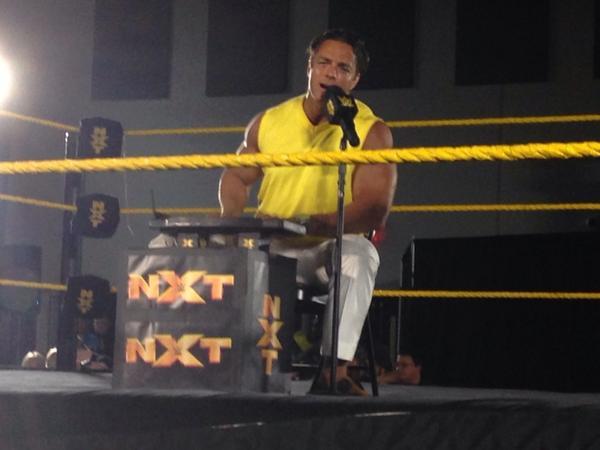 Ricker as Slate Randall at an NXT House Show.

The major obstacle to re-hiring Ricker is obviously his contract status with TNA, which is unclear. Dixie Carter announced earlier this year in May that they had signed Drake to a new deal but the length of that contract was never disclosed. Drake first started working with TNA in February 2015 and was the King of the Mountain champion for 82 days earlier this year.

There were high hopes for Ricker coming into WWE back in 2013 after he first appeared on TNT's reality TV show "The Hero" in 2013, a program which was hosted by The Rock. When he was signed, there were high hopes for Ricker. When he was released, several other talents were "future endeavored" along with him, ostensibly due to budget cuts, but Ricker's departure was different. Ricker had the charisma WWE wanted, as well as the chiseled look and he was making serious progress in the ring, but the higher-ups had some issues with his Twitter use.

Then, there was the e-mail.

Specific details on that e-mail were never confirmed but it was said to have angered several officials, who were already unhappy about some of his Tweets. There are those who would say it buried him with the company.

Although it appears that if these new reports are true, Shaun Ricker has been resurrected.