It's also going to be the title of the Raw-exclusive PPV that will take place on July 9, 2017 in the XL Center in Hartford, Connecticut. This was announced for the live crowd at the SmackDown broadcast last night, which took place at the Mohegan Sun Arena in Uncasville, about a 45 minute drove from Hartford.

If the Bad Blood name is familiar, it should be. This actually marks the fourth Bad Blood pay-per-view event.  The first was on October 5th 1997, and featured the debut of Kane, who interfered in the first ever Hell in a Cell match, attacking his brother The Undertaker and costing him the match. You can watch video from that night at the top of the page. 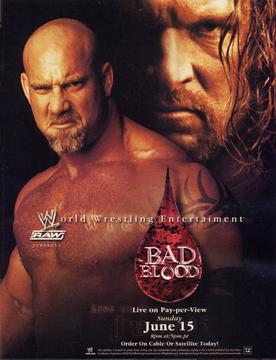 The WWE hasn't used the Bad Blood name for a PPV event at any time in the past 13 years.