Analysis: Average Age Among UFC Elite, And What Does It Mean?

During a recent ‘Holy Smokes’ podcast, Fightful Managing Editor Sean Ross Sapp and I discussed what the future may hold for a variety of the UFC’s divisions. Shortly thereafter, we were presented with some numbers and the brain waves went into overdrive.

Courtesy of KC Walton, who took the time to calculate the average age per weight class, we have ourselves some interesting data. The numbers reflect the age of the current UFC champion and the top 15 ranked in the division:

Now while the sample size for some of the divisions is smaller than others, some of the key takeaways are obvious.

The two youngest average age per division are women’s strawweight and men’s flyweight. They say speed deteriorates with age and the smaller the fighter(s), the faster they are. It seems somewhat obvious that the smaller the weight class, the younger the average age is.

The oldest average age is the men’s middleweight class, somewhat surprising to me, as I figured it would be the heavyweight division that would house the elder statesmen on the UFC roster. Not so.

Over the years, I have done my fair share of reading and research on how long the average MMA career is, when the average fighter will reach their peak, what their MMA mileage may be as well as other key attributes I use to analyze, break-down and predict potential outcomes of bouts.

Most fighters have an 8-10 year career, commencing around the age of 22, peaking in their late 20’s and sliding off (often drastically) around the age of 32. There will always be outliers but based on what I’ve seen, read, etc, this is what history has shown us.

Take into consideration MMA mileage, and these numbers will change. For those who may not know, MMA mileage is basically the amount of training (sometimes hard training and sparring) that a fighter has endured. Some start in their teens, peak in their mid 20’s then begin to fall off in their late 20’s.

One thing I’ve also learned over the years, is that no fighter can defeat ‘Father Time’. Once he shows up, it’s just a matter of time (no pun intended) before they can no longer compete with the upper echelon of their respective divisions.

While anything can happen in MMA, it’s often the champions who are under the age of 32, in the smaller divisions, that may be able to hold their titles longer, than those who are older, and perhaps in the higher weight classes.

Like most sports, it’s a young (wo)man’s game and MMA is no different.

Taking a look at the age of some of the champs, one can only wonder how long they will remain champion: 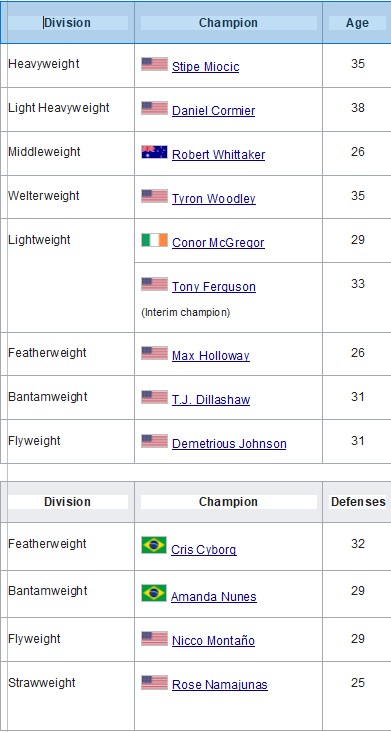 Barring injuries, it seems the future is super bright for the likes of Rose Namajunas, Max Holloway and Robert Whittaker, as well as Conor McGregor, Amanda Nunes and Nicco Montano.

One also has to wonder what’s in store for Daniel Cormier, Stipe Miocic, Tony Ferguson and Tyron Woodley. Considering time is of the essence for some of these guys, now you may understand why the ‘money fights’ are far more important than defending their titles. On the outside, even ‘Mighty Mouse’ knows he’s getting up their and age, so his urgency for wanting to get paid is valid.

While I’m far from a statistician, my insights are simply a surface level look at the numbers, but for those who are far more mathematically inclined than yours truly and for any readers who see other things, I’m curious as to what your thoughts may be. Please leave them in the comments or hit me up anytime via social media: @ShowdownJoe on all platforms.