Exclusive Analysis: Is Boxing Dying? An Inside Look At The Popularity Battle Between The UFC and Boxing

When I went to my first boxing event as a member of the media, it was January 14, 2017, and Brooklyn’s Barclays Center was electrifying, with more than 10,000 people filling the arena for a Showtime main event by two boxers, Badou Jack and James DeGale, who are not necessarily major boxing superstars.

But this card needed to be a big success, not just for the fighters, their promoters (DiBella Entertainment, Mayweather Promotions and Matchroom Boxing were promoting this card), but for the sport itself. This was the first big card after what many would consider a supremely disappointing 2016. Last year wasn’t just bad -- it was an abysmal year.

2016 was the first full year since Floyd Mayweather retired. The sport’s new heavyweight king, Tyson Fury, was absent all year long due to injuries and failed drug tests resulting in a suspension still active today, Gennady Golovkin and Canelo Alvarez did not get a fight set up for that fall, and pay-per-view numbers were extremely disappointing.

With such a bad year in boxing, talks of the sport dying and becoming obsolete compared to the fast-growing UFC, who to many is already the biggest combat sports organization in the world. That got me thinking-- was boxing really dying and is UFC really getting that much more traction than boxing?

I have decided to take it upon myself to figure out whether or not boxing is "dying?"

To start, I took a page or two out of the playbook of fellow Fightful writer Brandon Howard, who does extraordinary articles and analysis regarding WWE's financial aspects for this site, and decided to start with Google Trends, which gives a very good indication of Google Traffic for many topics, including boxing and MMA.

While the global search seems to give boxing a slight edge, I noticed something when I saw the geographical searches. The western hemisphere embraced the UFC more while the eastern hemisphere still clearly favored boxing on search engines. I wanted to narrow the search down even more to one specific country: The United States.

The second Google Trends search (which can be seen below) took a deeper look at how the UFC compares to boxing. Before 2016, UFC was doing very well in keeping up with boxing. The biggest peak for boxing in that time period is the Floyd Mayweather vs. Manny Pacquiao fight. Aside from that mega fight, it's obvious that UFC is on the rise and boxing has been on the decline, albeit a slow decline after the major drop once the Mayweather vs. Pacquiao hype died down when the fight was over.

The third and final Google Trends search (which can be seen below) I did was a look into each sport's biggest stars: Conor McGregor for the UFC and Canelo Alvarez for boxing. It's no surprise that UFC's massive spike in popularity in 2016 is directly linked to McGregor's own spike in popularity. Alvarez had been boxing's biggest star in the post- Floyd Mayweather era of boxing and has been groomed as such for the past few years, which explains his relatively sizeable lead from 2012-2015. 2016 was McGregor's year, however, with the three massively successful fights against Nate Diaz and Eddie Alvarez.

Looking at whether or not fans want to tune in and pay money to watch major events is another indicator into the popularity of both boxing and UFC. After all, the more popular something is, the more likely a large amount of people will go out of their way to pay money to watch it.

Below are two tables detailing the pay-per-view buys for UFC and boxing since 2012. One thing to note is that the boxing table only has pay-per-view cards broadcasted by HBO, Showtime and Top Rank. At the time of the research, some of the recent pay-per-view numbers have not been fully finalized, nor has some of their numbers have been officially released, so they are approximate figures of what the lowest buyrate could potentially be according to what I could find. 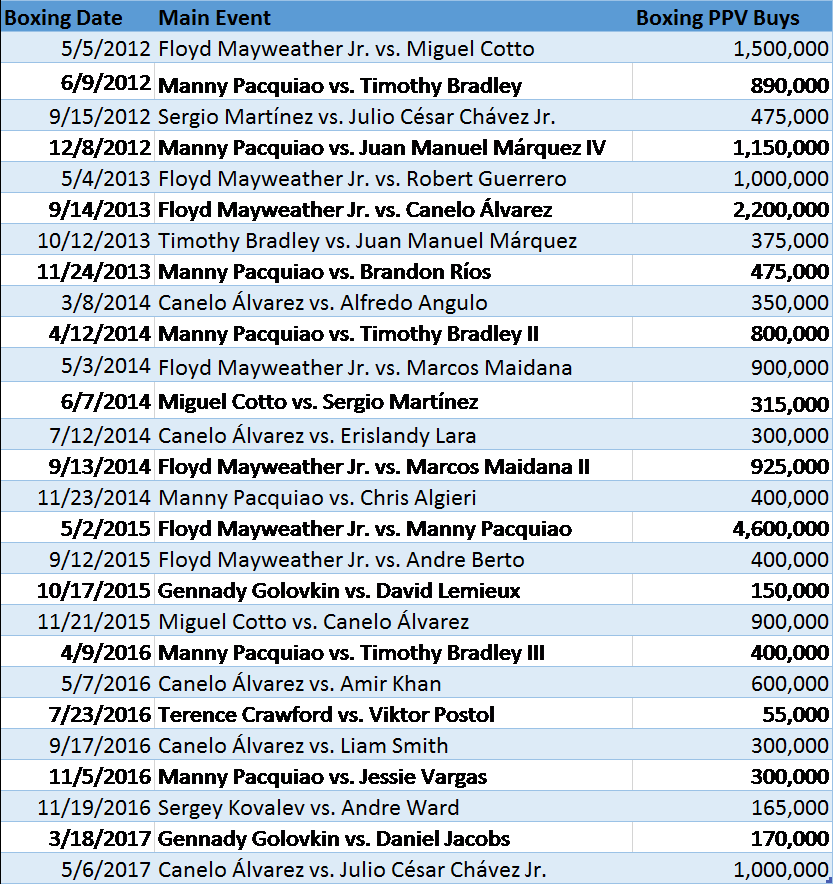 To go back to my point of boxing's failure of a year in 2016, that year was the only one where the average buyrate was below 500,000 and had one pay-per-view that only had just a putrid 55,000 buys. Boxing's success from 2012-15 is mainly attributed to the star power of Mayweather and Alvarez carrying most of the pay-per-view buys in that time period. Obviously, the boxing skeptic will point out the lack of Mayweather and Pacquiao for the majority of late 2015-2017 has hurt the sport tremendously.

But there is arguably an even better way of determining how boxing fares against UFC in terms of pay-per-view competition. I decided to look at all the months that had both a boxing and UFC pay-per-view and see how one compares with the other. The chart showing the results can be seen below. 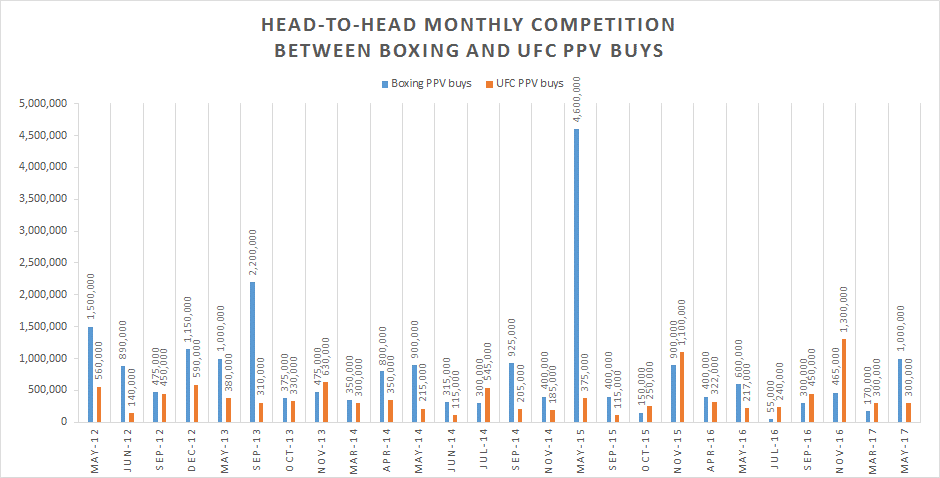 On the surface, it looks like boxing clearly had the edge over UFC, winning 18 months to eight in the head-to-head competition, but further insight reveals other truths. While boxing dominated the head-to-head, most of the wins came before the UFC pay-per-view boom of 2016. From 2015 to today, UFC led the month count in buys over boxing 6-5, representing a growing shift in popularity at least on the pay-per-view side.

Getting on the argument of boxing dying without Mayweather and Pacquiao reveals that is not exactly the case. In the 12 months from 2012-17 where boxing had a pay-per-view with neither Mayweather nor Pacquiao competing, there was an even split with the UFC, 6 to 6. At least head-to-head, it seems to indicate that boxing is still capable of competing with the UFC when some of their other stars during that time period, such as Alvarez and Miguel Cotto, are headlining cards.

The million buys Canelo had with Julio Cesar Chavez Jr., a fighter who has been as close to irrelevancy in terms of mainstream stardom as he is after his 2012 loss to Sergio Martinez, shows that Alvarez, with the proper promotion and the right opponent, is capable of drawing seven figures in buys. Or at the very least get close to breaking a million buys. Alvarez's star power will only increase with each pay-per-view win.

Factors Contributing To These Numbers

Consistency is key: UFC delivers between 11-13 pay-per-view cards a year, not to mention many television cards on a nearly weekly basis, reminds people of the UFC's growing presence. UFC is currently on FOX television, while boxing only has a handful of cards on any of the major television networks. Most of the quality free cards in boxing are either on HBO or Showtime, which have a much smaller subscriber base than people having FOX, CBS or NBC. UFC is more present on sports channels ESPN and FOX Sports than boxing, which helps remain on people's minds.

Star power: There are a lot of noticeable differences between Canelo Alvarez and Conor McGregor, but two of them immediately jump out to me: personality and signature wins. McGregor has a way more boisterous personality, which attracts a lot more than Alvarez's relatively mild mannered attitude. McGregor is a smart enough self-promoter to bring a vast amount of attention, from hardcore MMA fans to casual, to set pay-per-view records time and time again. Alvarez has Oscar De La Hoya, former pay-per-view giant in his own right, as his promoter. For the most part, De La Hoya serves his function well and even helped create interesting storylines that would give people incentive to buy Alvarez's 2013 loss to Mayweather (De La Hoya lost to Mayweather and so De La Hoya's prized pupil is tasked to defeat him).

This brings up a second point, which is their signature wins on pay-per-view.  Alvarez was handily beaten up by Mayweather, effectively sitting in as boxing's stagnant number four star at the time. It wasn't until Alvarez's win over Miguel Cotto that Alvarez was starting to increase his notoriety. After his loss to Mayweather, Alvarez has won all six of his pay-per-view fights, but only averaged 575,000 buys, only topping seven figures in buys once. His signature wins over Cotto, Amir Khan and Julio Cesar Chavez Jr. is not an inherently bad list of fighters to have wins over, it pales in comparison to his UFC star counterpart. McGregor, on the other hand, became an immediate superstar with his 13-second win over Jose Aldo at UFC 194 and a lot of people had seen this coming, considering his previous fight against Chad Mendes did more than 800,000 buys. After Aldo, McGregor's two-fight series against Nate Diaz and historic win over Eddie Alvarez to become a dual champion only increased McGregor's brand. Each fight was an even bigger challenge for the Irishman and McGregor looked better and better after every fight, until falling to a charismatic Nate Diaz. Add in McGregor's infectious personality and the UFC has its cash cow while Alvarez's momentum has been a roller coaster ride.

Bigger fights: UFC president Dana White has done a great job in the past few years creating marquee fights and outstanding pay-per-views for the most part. White understands that the fans will want to pay for the product with major fights that showcase their biggest stars. Unfortunately for boxing, this was not always the case. While the sport has put out very good fights on paper (Mayweather vs. Pacquiao, Cotto vs. Alvarez, Mayeather vs. Pacquiao, Alvarez vs. Chavez Jr.), several pay-per-views had man events where interest bordered between mediocre and almost nonexistent (Crawford vs. Postol, Ward vs. Kovalev). There is still a very noticeable need for quality boxing and after a very poor 2016 in that department, the fact that Alvarez and Chavez Jr. were able to draw a million buys shows that there is a very large market for boxing in the United States that is still yet to be fully tapped in Mayweather's absense.

It's safe to assume that boxing will be here to stay for a very long time. Thanks to the unbelievably successful 2016, the UFC has officially overtaken boxing in terms of popularity in the United States. Other countries, mainly Canada, Brazil and Ireland, followed suit, but some analytics still indicate that boxing is still a more popular global sport. Just because the United States has adopted the UFC more than boxing since 2016, that doesn't mean that boxing has fallen to the wayside. Thurman vs. Garcia did better numbers than more than 80 percent of UFC on FOX shows, boxing has returned to airing cards on the major television networks and the recent news of Manny Pacquiao's upcoming July 1 fight against Jeff Horn airing on ESPN indicate that boxing will be in the mainstream media's vision.

While 2017 has been extremely promising so far, we'll get a better indication of where boxing stands later this year, not with the Mayweather vs. McGregor pay-per-view numbers, but with Golovkin vs. Canelo's pay-per-view numbers. Golden Boy Promotions CEO Oscar De La Hoya said the fight has the potential to get close to three million pay-per-view buys, but that number now seems nearly impossible to achieve with Mayweather vs. McGregor happening three weeks earlier. If the middleweight megafight does very good numbers (perhaps 1.5 million buys), then boxing will be set up to make a complete resurgence.

So is boxing dying? At the moment, no. Boxing will beat the UFC this year -- with the help of a UFC Champion. With big fights taking place since the start of the year (with the biggest fight yet to take place) and the emergence of Anthony Joshua being the face of heavyweight boxing, boxing looks to be getting out of the funk it got in 2016 and back in the mainstream conscious.

Graphs and tables were created by Carlos Toro.