The Tuesday coming out of WWE's 'Money In The Bank' PPV in June, the sports-entertainment company announced that they released Big Cass from his WWE contract. Fightful's own Sean Ross Sapp published an exclusive here on the site which noted that Big Cass was flown to Toledo where SmackDown Live was being taped and he had a meeting with WWE Chairman Vince McMahon which waas ultimately about Cass' release from the company.

Another Name Qualifies For 'Face Of The Revolution' Ladder Match At AEW Revolution; Updated Card

After two months of not hearing about or from Big Cass, the 'Big Time Wrestling' promotion unveiled that Cass' first post-WWE appearance will be for their promotion on September 21st and that he was now going by the name "Big Cazz". In an updated graphic of the event posted on the Big Time Wrestling Facebook page, "Big Cazz" has converted his name to "Big C" and will be going one-on-one with former TNA World Heavyweight Champion James Storm. Also scheduled for an appearance on the show is WWE Hall Of Famers Mick Foley and "Hacksaw" Jim Duggan, along with an World Inter-Gender Championship match between Tenille Dashwood and James Ellsworth. 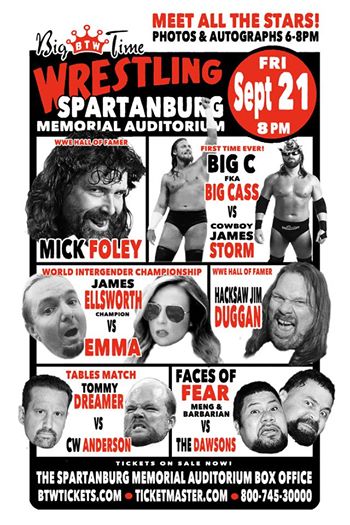 To read the exclusive about Big Cass' release from WWE, click here. Also, Big C's former tag team partner 'Real1' stated during an interview last month that there is not enough money in the world to get him to wrestle again.