CruiserWeight Classic Heavyweight Reaction, 8/3: The True Test of a Friendship Is Being Kneed Really Hard In The Face

Welcome to the weekly CruiserWeight Classic Heavyweight Reaction, where I take you through last night's matches in what I have come to call the Olympics of Professional Wrestling.

Why is it the Heavyweight Reaction?  Because I'm a big dude, and I'm reacting to stuff.

Thunder Rosa: I Would Love To Defend The AEW Women's World Title In Japan But That's Up To Tony Khan

The Cruiserweight Classic is my JAM, yo.  And if isn't yours, it damn well should be.

Last Week on The CruiserWeight Classic Heavyweight Reaction: We found out Zack Sabre is a wizard, Drew Gulak ain't got time for any of your sh*t, Tony Nese is like if Neville and Bray Wyatt had a baby, and Brian Kendrick is a horrible person who should be ashamed of himself.

On this week's episode:

Get your popcorn ready. This is going to be good.

Jerry knows what I'm talking about.

No, not the guy from My Name is Earl. Not that Jason Lee.

This Jason Lee is from Hong Kong, trained with fellow CWC competitor Ho Ho Lun, and he brought a pair of damn nunchuks to the ring.

Now this isn't Lucha Underground, so he doesn't get to use them in the match, but still, pretty sweet chucking, dude.

You know what else is awesome? This:

If the full front flip leapfrog and the picture perfect dropkick weren't awesome enough for you (and why would they not be?) check out that bobblehead stank-face mug for the camera. What a showman. Get this guy on WWE TV S.T.A.T.

In case you're stil not impressed, peep this, mothaf*ckers:

And just in case your personal "awesome bar" is set impossibly high, feast your eyes on this:

Rich Swann is not only crazy athletic, he's super natural on the mic. Check out this video package about his amazing, heartbreaking story:

This guy has enough charisma and personality for five Apollo Crewses.
Matter of fact, bring him up to Smackdown TOMORROW, team him with Crews, let him do all the talking, and have them be the hotshot upstarts who feud with American Alpha for the new blue team tag belts.

Yeah, I know, two weeks ago, I pitched a tag team for Crews that involved Akira Tozawa. Scratch that, though. Give this guy the mic, give him time to flip and stankface and let him run with it.

Or hell, let him anchor the Cruiserweight Division on Raw.

I don't care which. I'm #RichSwann4Life.

By the way, he's got a match in the second round vs the guy who did this:

And I am literally incapable of waitng.

Wow, this was a dogbaby of a match.

I never even giffed anything, it was so bad.

The crowd was DEAD. Like Deader than Dead. Like Vigo The Carpathian dead. Poisoned, stabbed, shot, hung, stretched, disemboweled, drawn and quartered.

This is disappointing. From researching Noam Dar for my HUGE Bracketology Bonanza, I can say with a fairly high degree of certainty that this is the worst match he's ever had.

I choose to blame Gurv Sihra.  He taps out to a kneebar, ending this match, for the good of society.

Thank God that's over. Moving on.

Now this is something special.  Jack Gallagher looks like an old painting of an English dandy boxer come to life:

He wears trunks to the ring that make his butt look like a tiny hot air balloon, and he will not stand for any of your guff, good sir.

Fabian Aichner looks like what would happen if a muscle grew a face: 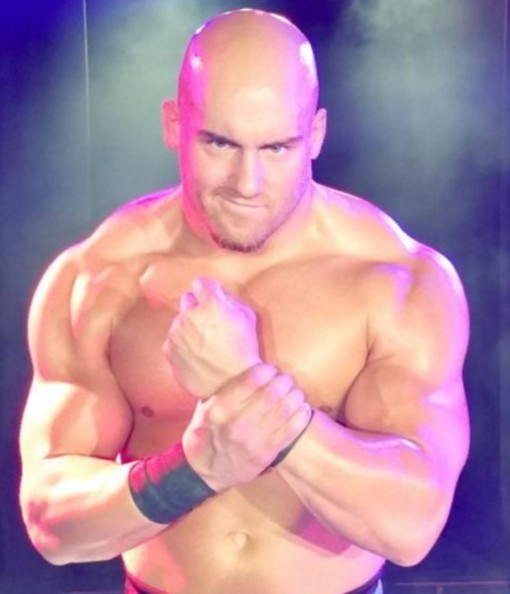 And together they turn in one of the best matches of the first round.

Watch how athletic Aichner is there, getting out of that wristlock.

Now watch Gallagher do it with considerablly less effort, but just the same amount of flair.

The crowd pops for that.  And well they should.

Watch these two dual at getting out of a toe hold. Again, pay attention to the economy of Gallagher's movement, and the muscularity of Aichner's.

As wrestling stalemates go, that might be my favorite. It's almost indescribably beautiful.

Speaking of which, Aichner needs a contract with NXT like yesterday.

He's equal parts power and agility, plus he's a good looking muscular Italian who speaks German. He could be your top heel Cruiserweight. Watch this little video about him and tell me he doesn't have enough natural personality to be a WWE superstar.

Plus he can get out of Guillotine choke by doing this:

That's INSANE. Not just the move, but the fact that Gallagher kicked out of it. Little dude's got resilience.

He's got a hard head and a corner dropkick that'll put a damper on your weekend plans.

Now if this were a legit fight, Aichner would have come in as the heavy favorite, outweighing Gallagher by 40 pounds, and at this point in the match, he would have been WAY ahead on points. But he couldn't put away the underdog, and the underdog damn near took his head off. It's like he scored a surprise flash knockout. It's the Olympics of Professional Wrestling, and I love it.

One of the major complaints about the CWC that I hear about and read on social media is that the matches don't have a story leading up to them. And that may be true in some cases (though I can appreciate a match for great wrestling alone, and I think the in-ring storytelling is usually top-notch), but it's not true here.

Watch that video above. These two are not just tag team partners. They're best friends.

On the network, before the match, the two are interviewed:

Gargano: "You do what you gotta do."

HOW ARE YOU NOT GEEKED FOR THIS MATCH?

Well if you're not geeked, you better get geeked.

This is the match of the tournament so far.

Ciampa knows that Gargano is the better technical wrestler, so when he finds himself in a hammerlock, he doesn't try to wrestle his way out of it.  He tries to knock out a few of his best friend's teeth.

And if you think that's brutal, you ain't seen nothing yet.

Ciampa blocks a Sunset Flip Powerbomb, but that might not have been the right course of action:

If you're watching that sequence, when you see Gargano hit that beautiful suicide dive, if right then your wrestling boner isn't fully engorged, you might want to consult a physician. Ladies too. Ladies can have lady boners, unless I missed something in Sex Ed class.

This match is insane. These two may be like brothers, but tonight, they ain't playin'. Johnny's hitting Enzuigris and nasty slingshot impaler DDTs:

And one point, Ciampa hits Gargano with Air Raid Crash on the apron, which as we all know by now, IS THE HARDEST PART OF THE RING.

And Gargano is OUT.

Oh he may be crawling around, but he's out. Johnny Wrestling has no clue what year it is, and no matter how many times you ask him how many fingers you're holding up, he's gonna say "Eleven."

This where sh*t gets nuts. You want to talk about story?

How's this for a story: Tommaso Ciampa rolls down the knee pad, and is about to cave in the skull of his best friend, then realizes that no matter how much he wants to win, he doesn't want it enough to give his best friend brain damage.

BUT JOHNNY WRESTLING AIN'T READY TO GO HOME YET.

Ciampa hits a powerbomb lungblower. Johnny kicks out.  Ciampa looks like he's seen a ghost. Gargano might be legally dead.

Look at these two:

You want to tell me there's no story there?

Johnny wins this match because, even though he was beaten to within an inch of his life, he is the better wrestler, and he reversed a bridging Fujiwara armbar into a Crucifix Pinfall.

But if Ciampa hadn't been concerned for the future of his best friend's life and career, he could have ended both of those things with one Shining Wizard knee strike.  He hesitated. He lost.

But the best part of the story comes after the match, when Johnny offers his hand in friendship:

Ciampa just can't do it. Not now. Not after he was so close to victory.

(GOD THIS WOULD HAVE BEEN SO MUCH BETTER IF THEY HAD MET IN THE FINAL FOUR. STUPID BRACKETS.)

He walks away. But stops. Something makes him turn around and go back to his tag team partner. His friend. His brother.

I've never been so happy to be wrong.  Because instead, this is what happened:

That might be the most touching thing I've ever seen. Not gonna front, I got choked up.

Until next time, I've been Alex Pawlowski, and this is me
watching Tommaso Ciampa put his arm around Johnny Gargano.

Recent News
AEW Dynamite (5/25) Preview: Viva Las Vegas! CM Punk, Wardlow, And More Gear Up For Double Or Nothing
Thunder Rosa: I Would Love To Defend The AEW Women's World Title In Japan But That's Up To Tony Khan
Dax Harwood Will 'Beat The Shit Out Of You' If You Think You Admire Bret Hart More Than Him
Scorpio Sky Wants To Do More Acting But Knows Not Everyone Can Be As Successful As The Rock
Gisele Shaw Confirms She's Signed To IMPACT Wrestling, Discusses 'Quintessential Diva' Character
Ric Flair Has Invited Hulk Hogan To Starrcast V, But Not To Wrestle Him
Results
NJPW Best Of The Super Juniors 29 Night 8 Results (5/25): Hiromu Takahashi Battles YOH
Jeremy Lambert May 25, 2022 8:34AM
NWA Powerrr Results (5/24): Ella Envy vs. Max The Impaler; Trevor Murdoch vs. Mike Knox Headlines
Robert DeFelice May 24, 2022 11:23PM
WWE NXT 2.0 Results: Bron Breakker In Action, Mandy Rose vs Indi Hartwell + More
Luis Pulido May 24, 2022 7:15PM
AEW Dark Stream And Results (5/24): Roppongi Vice, Lee Moriarty, Kris Statlander, And More In Action
Gisberto Guzzo May 24, 2022 6:45PM
Spartan Pro Wrestling Results (5/21/22): An 'I Quit' Match For Heavyweight Title Headlines
Robert DeFelice May 24, 2022 12:12PM