where I go way too in-depth
on a Twitter beef between a guy with
73 followers
and a guy with 2.33 Million

THERE IS NO CONSISTENCY ON SOCIAL MEDIA

So yesterday, Roman Reigns dragged some poor dude on Twitter.

Let ME give you a tip amateur. @WWE is the Top of the Mountain in Pro Wrestling. A view you'll never deserve or get to enjoy. #Facts https://t.co/sHf9ebYmi7

And that Tweet is considered the full news story on other sites.

But here at Fightful, we aim to give you the FULL story behind one of the most popular wrestlers in the world (love him or hate him) beefing down needlessly on Twitter.

The story has some twists and turns and goes some interesting places.

Well, you can't just write the name "Roman Reigns" on social media in this day and age without expecting to get some kind of backlash.

You know. The thing.

So someone came in to defend Roman. Not just anyone, though. Someone who goes by Roman Reigns-Empire (@RREmpire_) on Twitter, so you know they're unbiased.

Do you wrestle , do you stay in the Ring 24/7 ? To say/judge that ? A lot Wrestlers he had Matches with say otherwise and praise him !

And that's where the star of this story shows up: Ian Porter--or as he's known on Twitter, @HeelDegenerate.

I wrestle and I say he sucks. A 30 minute match and he'll use maybe 4 actual wrestling moves. Otherwise it's "Roman strong *bangs chest*"

Then, the same person who said that Roman can't wrestle on June 10 dropped back in to defend Roman, because there is no consistency on Social Media, and to say that Ian Porter couldn't do any better.

Yeah i know, but you couldn't do any better than a wwe superstar

So then Porter came back at her with this:

Lol ok sweetie..here's a tip, some of us don't like @WWE or their bs politics. We're happier where we're at.

Okay, so Ian Porter has a point. He doesn't like the politics of WWE. That's cool. And some guys don't want to go to WWE, so I guess they would be "happier where they're at."

But where is Ian Porter at?

His avatar on Twitter is the CZW logo. CZW, if you don't know, stands for Combat Zone Wrestling, and it takes the old ECW style, turns it up to 11 and rips the knob off.

But it appears that Ian Porter himself isn't in CZW. He's an aspiring pro-wrestler, according to the pinned Tweet on his profile.

So I'm gonna work out and train for the next few months. Then I'm contacting Southside Pro Wrestling (closest to me) for a tryout#Goals

So it appears from his Twitter feed and his avatar that he's a big fan of the ultra-violence of certain indy promotions, but is not yet a professional wrestler.

Now, let's go back to his earlier Tweet, where he gave @AlexiaHarrison7 "a tip."

Lol ok sweetie..here's a tip, some of us don't like @WWE or their bs politics. We're happier where we're at.

So I guess Roman himself was scrolling through his mentions and decided to beef down a little bit, and that's where we got the newsworthy Tweet.

Let ME give you a tip amateur. @WWE is the Top of the Mountain in Pro Wrestling. A view you'll never deserve or get to enjoy. #Facts https://t.co/sHf9ebYmi7

Ian Porter came back at Roman (and all of the Roman fans in his mentions) with a series of Tweets, defending the CZW style. 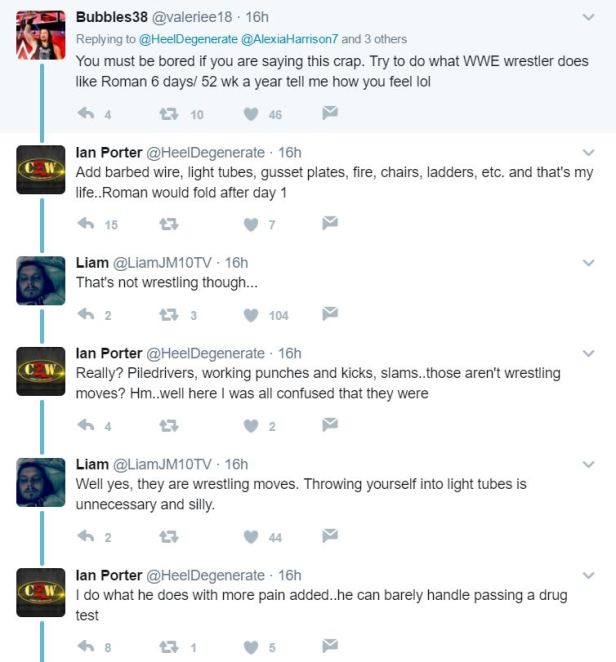 Then, of course, he had to come out and challenge Reigns to a match.

Roman fans didn't take too kindly to that.

Then he made the whole thing into a political statement.

This is an interesting point, except that before he decided to start training to become a wrestler, back on April 3rd, he didn't seem too opposed to going to WWE someday.

Because there is no such thing as consistency on Social Media.

I seem to have disturbed the force in the fat chick community..they must be waiting for the next cake to come outta the oven

And now I'm really sorry I spent so much time on this story.

Enjoy the rest of your Tuesday, everyone.

UPDATE: In a further plot twist, it's as we all pretty much suspected, and Ian Porter has no relation to CZW at all.

But don't take my word for it, take it from DJ Hyde, the owner of CZW. 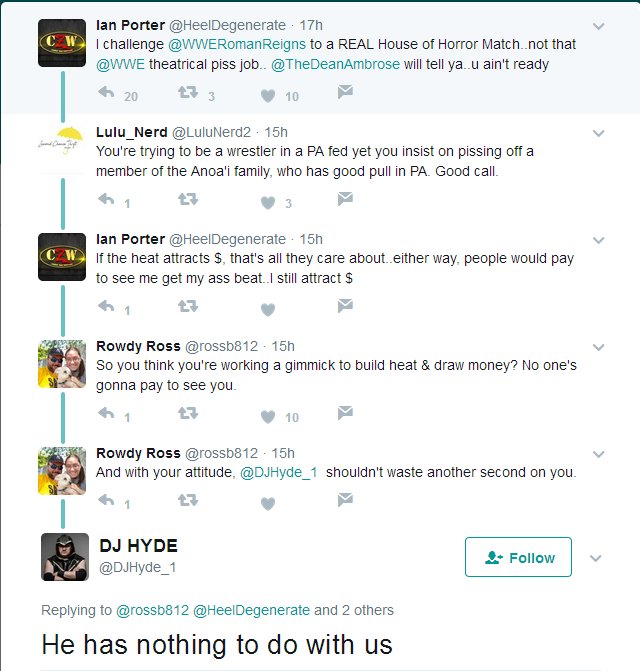 And that's the end of that story.