Drop down into the comments and join our
LIVE VIEWING PARTY 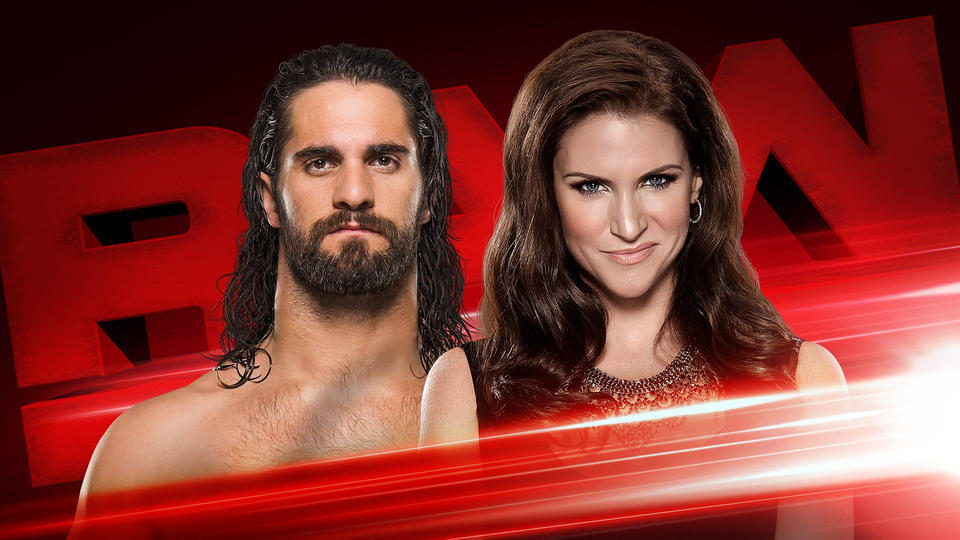 (For better or worse.)

KO says no one gave him a chance last night, but he proved everyone wrong, especially Mick Foley.

He's man enough to admit that he had some help last night, and he wants to thank the man who helped him:

They hug it out.

KO puts over Jericho's performance in the Rumble last night, when he was in the match for over an hour and broke the record for most cumulative time in the Rumble over the course of a career.

Jericho talks about how great he is and then ...

Braun comes out, says he doesn't want Owens' thanks. He did what he did for two reasons:

1. Because he hates Roman Reigns.

2. Because Owens promised him the first title shot after the Rumble.

Strowman throws it to the footage of Owens promising Strowman a title shot on Raw a month ago.

Owens says that must have been photoshopped.

Strowman says he wants the title shot that he was promised and he wants it TONIGHT.

Owens is upset about this latest development.

A non-title match. Don't be surprised if Sami wins here and you see this match ten times between now and FastLane.

It's going pretty well for Sami to start, and then this happens:

Chris Jericho in control after the break, and manages to hit a TOP ROPE FRANKENSTEINER like it's nineteen-ninety-damn-seven over here.

But Sami catches a double axehandle and hits a Blue Thunder Bomb.

Sami he makes it to the ropes.

Exploder into the corner, then a Helluva Kick.

... shocking no one since they do this kind of thing all the time now.

Backstage, Sheamus and Cesaro are bickering.

But it's okay because Bayley shows up and says they should hug it out, since they have a big Mixed Tag match tonight vs Charlotte and Gallows & Anderson.

They hug it out, because Bayley is magic.

Charlotte and the Good Brothers show up, Charlotte is a bitch, Gallows calls them nerds, then they walk away.

Kevin asks her to get his match with Strowman cancelled.

She says yeah, but after I handle the Seth Rollins situation.

Owens is satisfied with this outcome.

Two of my favorite guys in the Cruiserweight division.

Ali blocks Nese's German Suplex into the turnbuckles, then get turned inside out by a big lariat.

Ali comes back, hits his rolling somersault neckbreaker, then a spinning kick.

Ali heads up to do the imploding 450, but Nese takes out his legs and he falls from the top right on the back of his head.

Nese sets him up in the corner, then hits the running knee.

Austin Aries interviews Nese after the match and is very good. I like Austin Aries.

The substance of the interview is that many people believe Nese has "clearance rack charisma."

Damn I wish this guy could talk, he's such a bad-ass in-ring.

Seth tells the boss's daughter to "Suck it up, Buttercup."

This should go well for him.

He gonna get emasculated TWICE.

She says Triple H isn't here tonight, Seth says he's afraid, Steph says he is afraid, "of what he might do to you, Seth."

Steph says Seth owes her and Triple H an apology for interrupting NXT and for just being stuff she doesn't like.

Seth is sorry for exposing Triple H as a coward.

Steph and Seth say mean things to each other.

Then Seth says he's going to invade a board of directors meeting.

He says he's going to show up at Triple H's house, and he THREATENS HIS CHILDREN.

"THIS DOESN'T END until I get my hands on @TripleH ... and I SLAY THE KING!' - @WWERollins to @StephMcMahon #RAW pic.twitter.com/PrTCg1v7T1

Steph then admits that Triple H is on his way to the arena, "and he's coming for YOU!"

Nothing really happens in the match until Cesaro is stupid and gets distracted by Charlotte literally just yelling "HEY" at him.

Back from the break and Cesaro is taking damage, not able to make the tag to Sheamus.

Sheamus finally gets in, does this stuff.

A little assistance on the #WhiteNoise from @WWECesaro as he and @WWESheamus work like a well-oiled machine! #RAW #MixedTag pic.twitter.com/fOMMidbBEi

Mick says you need to trust me. She's like whatever.

So I guess the match is still on?

Also, Steph promises that Triple H will be here tonight, unlike with that "music hits/no show fiasco" last week.

He gets in the ring and yells a lot about how no one respects him.

Rich Swann interrupts, says he's not here to fight, he just wants to talk some sense into him.

Swann thinks Neville is wrong and that the people do respect him. Hell, Swann respects him, even though he lost last night.

Swann extends his hand, Neville is like you will BOW BEFORE YOUR KING.

Swann turns to leave, Neville says "you don't turn your back on your king," attacks him.

Swann gets the better of it quickly, and Neville runs away.

Sasha is in the training room getting ready for a match with Nia Jax.

Bayley is trying to talk her out of it, says she's got nothing to prove, and she could get hurt.

It feels like we're so close to this turning into an after-school special. pic.twitter.com/zj4Q6mKR2K

OH NO SHE DIDN'T.

Owens is panicking, begging Chris to have his back and help him beat Braun.

Chris Jericho is sitting in on commentary, but not for long.

As soon as Braun comes out, he goes straight for Jericho.

Taking the proper precautions is @BraunStrowman, because he just ANNIHILATED @IAmJericho before this match! #RAW pic.twitter.com/Ske3xQq12p

Then he chokeslams him through the announce table.

And Owens is now on his own.

How is Braun Strowman the smartest guy on the roster?

The match starts and Strowman begins the destruction.

Eventually though, Strowman runs into the ringpost on the outside and Owens hits him with a Cannonball against the barricade.

Back in the ring, Owens hits a front flip guillotine leg drop, then a Senton, then a huge Frog Splash.

Two count, then Owens goes back up again. Strowman to his feet, then he grabs Owens off the top rope, Running Powerslam.

Then, for good measure, he gets in the ring and Spears poor Kevin Owens.

He goes up the ramp, as Strowman gets up, none the worse for wear.

I love Braun Strowman, and it makes me angry that he's going to be fed to Roman Reigns, whom I do not love.

Brock Lesnar pulls up in a black suburban.

Back from the break, and Brock's music hits.

He comes to the ring with Paul Heyman.

It's a clever premise.

Paul says he can't go anywhere without hearing "yeah, but" and he hates it.

Paul says Brock is challenging Goldberg to one last match at Wrestlemania.

A truly great promo, and now, somehow, they've got me interested in this match again.

Sasha comes at her immediately, with drop kicks to the knee.

Nia's power is just too much, though and she drags her to the outside in a full nelson, swinging her knee into the ringpost.

Back in the ring, Nia puts her in a vicious looking submission, Sasha doesn't tap out, but the bell rings anyway.

After the bell, Nia puts her back in the submission, and Bayley runs out to make the save.

She doesn't attack though, just kind of pleads with Nia to let her go, and it works.

.@NiaJaxWWE shows NO MERCY to @SashaBanksWWE in a #RoyalRumble Kickoff rematch on #RAW. @ItsBayleyWWE pic.twitter.com/p1vXlmlHdQ

Enzo and Big Cass are done.

They're completely unfunny now. I give it three months before the rest of the WWE Universe figures it out.

It's just a brawl on the outside, with Cass beating the hell out of Rusev and Jinder tossing Enzo around.

I want this match to end during the COMMERCIAL.

Back from the break and sadly this match continues.

Rusev and Jinder double team Cass until Enzo gets back to his feet and tries to help, gets destroyed.

Rusev, I am sorry, you deserve better. And you are the only one.

Rusev and Jinder are beating the piss out of Enzo in the ring, and then Jinder goes outside and WAKES UP SLEEPING CASS for some reason.

Cass gets back in the ring and does his four moves that he does. Enzo gets involved, pulling Jinder back outside and throwing him into the steel steps.

Big Cass hits a big boot on Rusev, then throws a falling Enzo at Rusev's prone body, and Enzo gets the pin.

Triple H says that he is the reason that Seth was a success.

He blames Seth for getting injured, and he blames him for relinquishing his title?

He blames Seth for being out for Seven Months?

He keeps saying that Seth spit in his face. Did he do that? I missed something.

Triple H says he hasn't answered Seth yet because his wife asked him not to.

But when Seth shows up at the place he created, now he's done trying.

He calls Seth out.

HE RUINS SETH ROLLINS! Throws him all over the outside of the ring.

Triple H stands over him, then walks away.

Joe rolls Seth into the ring, then hits him with a bunch of Sentons and gets him in the Coquina Clutch.

Hooray for this, saving Raw.